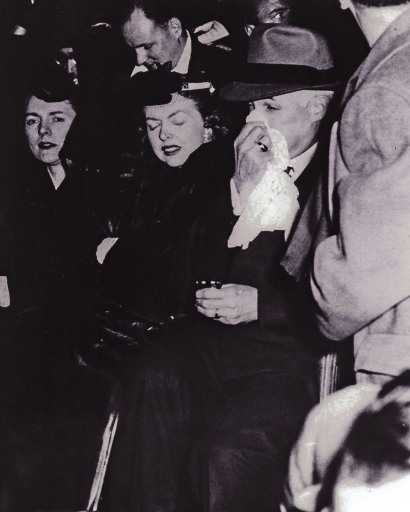 That’s it, you can just glimpse it, right there, by Clarence Campbell’s knee: the red 1955 riot-seat that sold last night as the big Classic Auctions fall blow-out came to an end. Or — can you? Maybe not. It’s there, though, if you can picture it underneath the NHL president in his moment of crisis. Nineteen bidders battled for that seat last night, with the winner prevailing at a price of $3,676 — a true bargain, I’d say, considering that it went for $12,000 in 1996. That’s Miss King, by the way, in the photo, next to her boss and future husband. I’m supposing that this is after the smoke-bomb was tossed but before the tomato — hey, is that a BlackBerry Campbell has in his hand? Now that would be worth something.

Howie Morenz’s death-skates commanded a price of $7,756 this time, with 13 bids. Very reasonable indeed, considering they previously sold for $25,000. Any bets on how long before they show up on the market again?