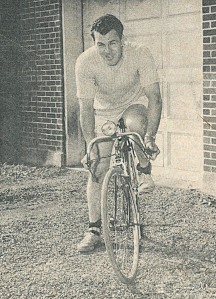 The story of Butch Bouchard’s famous bike ride is well and firmly rooted, we’ve learned in the weeks following his death on April 14, even if it’s still not true. It’s the one (to review) where the prospective defenceman got on his bike in Montreal one day in October of 1941 and cycled all the way — a distance of 60 kilometres — to the Canadiens’ training camp in Sainte-Hyacinthe.

An inspiring tale, repeated hither and thither ever since coach Dick Irvin made the whole thing up.

Bouchard himself admitted as much in 1956, noting how happy he’d been to keep the story alive, just for the fun of it, to the extent that he’d added texture as the years went on, describing the punctures he’d had to fix along the route.

None of which has kept the legend from growing, almost daily, it seems like, over the past few weeks. First there was The Washington Post’s obituary, which had Bouchard cycling there and back every day of camp. Other reports had the distance pedalled as anywhere from 30 to 50 kilometres. As posted on CBC.ca, The Canadian Press, meanwhile, has done even better, claiming an 80-kilometre trip, which would have taken him well on his way to Drummondville, far from the line-up he was trying to crack.