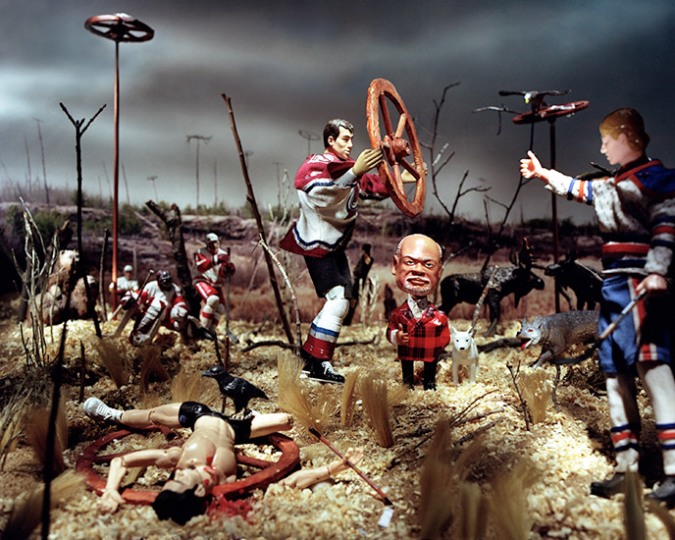 113 Days Later: Winnipeg artist Diana Thorneycroft’s “The Martyrdom of St. Donald” (2006), which doesn’t purport to depict the state of the NHL after its third Bettman-era lockout, but could. For more of Thorneycroft’s scintillant northern visions, visit dianathorneycroft.com.

So then the NHL did apologize, Wednesday afternoon, in the persons of Boston Bruins’ owner Jeremy Jacobs and commissioner Gary Bettman, in New York, once the owners had voted to ratify the new CBA. Jacobs, who chairs the league’s Board of Governors, said, “This great game has been gone for far too long, and for that we are truly sorry.”

When it was Bettman’s turn, he dug deep to find as personal a statement as might ever have left his lips in the 20 years he’s been manning the bridge at the NHL.

“To the players,” he said, “who were very clear they wanted to be on the ice and not negotiating labor contracts; to our partners, who support the League financially and personally; and, most importantly, to our fans, who love and have missed NHL hockey, I am sorry,” Commissioner Bettman said. “I know that an explanation or an apology will not erase the hard feelings that have built up over the past few months, but I owe you an apology nevertheless.”

The early reviews of Bettman’s soliloquy were generally warm, -ish, especially if you compare them to what the critics were saying about him during the stoppage, with Detroit defenceman Ian White rating him “an idiot” and Kris Versteeg, from Florida, calling him cancerous. “I think when you look at Bill Daly and Bettman, they’ve been polluting the game for far too long,” Versteeg added. Chicago’s Dave Bolland Twittered out a fan’s wish for Bettman’s death — though he, Bolland, felt bad about that and apologized.

This week, at Yahoo! Sports, Greg Wyshynski thought he was sincere. The Globe and Mail called the apology “abject,” while on the Letters page readers said “save it.” “Empty,” was the word in the next morning’s Montreal Gazette. At The Vancouver Province’s blog, Wyatt Arndt declared that Bettman should never again be allowed to touch the Stanley Cup in order to (1) punish his sins against the game and (2) keep its sacred chalice from further smudging at his unworthy hands. Further out on the cybersteppes there were those, of course, who wished for Bettman to resign, be fired, vanish, and/or couple with himself, though not really many more than usual.

None of the chatter is likely to keep Bettman from his sleep, as Jonathan Gatehouse noted in Maclean’s at week’s end, given that in the new CBA the players’ share of revenues falls from 57 per cent to 50 per cent. Gatehouse, who wrote the book on Bettman — The Instigator (Viking/Penguin, 2012) appeared just as the lockout began in the fall — quotes Rod Fort, an economist and professor of sport management from the University of Michigan: “Clearly, the owners have scored a major victory.”

“As I said,” Bettman said on Wednesday, “we know that no words of apology or explanation will soften the disappointment. I read the letters, I followed the tweets, I read the blogs: we have a lot of work to do. The National Hockey League has a responsibility to earn back your trust and support, whether you watch one game or every game. And that effort begins today. The players are ready to play their hearts out for you, the teams are preparing to welcome you back with open arms, the wait is just about over. Like all of you, we can’t wait to drop the puck.”

Over at the NHLPA’s website, the news is that Tampa Bay’s Teddy Purcell enjoyed a Newfoundland Christmas for the first time in years, thanks to the lockout. It’s true that the league’s 740-some players only finished up their ratification vote this morning, so it may be that they’re still drafting the language of their apology. Meantime, the news is that Purcell got some pretty good presents as a kid in St. John’s. “There’s a few that I definitely do recall. There was a GT snowracer that came with a Brett Hull poster. I used that thing night and day, going up and down hills, through the snow. I loved it.”