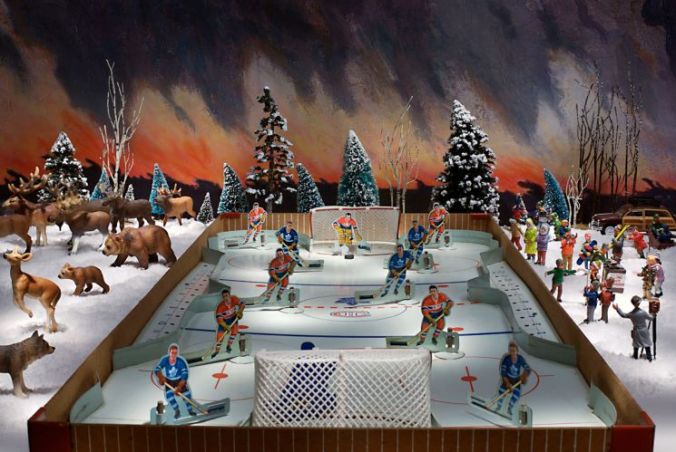 was a headline this week at philly.com.

From up on the International Space Station, the commander of Expedition 35 tweeted that he was enjoying Leafs games on TSN. “I watch them while working out,” wrote Chris Hadfield. “Great to see their skill and grit. Go Leafs!”

In The Detroit Free Press, Red Wings’ coach Mike Babcock discussed some changes in line combinations he’d made to try to help generate more offense. “We feel,” he said, “with Fil and Bruns and Clears, that’s a pretty good line. Fil’s been a good centerman for us. We like what the Mule is doing, so we’re just going to spread our lineup out and go a little bit deeper.”

Gare Joyce had a dream he couldn’t fathom: “I was interviewing Sidney #Crosby but he was only 4 ft tall + had helium suffused voice.”

Viktor Stalberg looked in the mirror this week and tried to count the stitches. A shot from Anaheim’s Ryan Getzlaf had hit the Chicago winger, Crosbylike, near the mouth, although Stalberg’s jaw didn’t break. “There are still a couple you can’t really see,” he said, regarding the stitches.

The doctor said it was 50 to 60, something like that — 20 on the inside and a little bit more on the outside.

It doesn’t look great, but it doesn’t feel too bad, to be honest with you. You cut so many nerves, my face is still numb, and you can’t really move it like you want to. I’m sure when the swelling goes down and those nerves heal up it will feel a lot better.

“What happened?” said Pittsburgh’s James Neal after Michael Del Zotto of the Rangers knocked him cold for a moment with what one paper described as “a reverse-forearm/elbow.”

Boston’s Brad Marchand said he was pretty nervous the first time he skated on a line with Jaromir Jagr in practice. He felt compelled to pass him the puck. “I felt like every time I got it I had to give it to him and let him play with it. Guys were yelling at me because we’d be on a 2-on-1 and the defenseman would just stand by him and I had a breakaway but I would still give it to him.”

Toronto listed winger Joffrey Lupul as day-to-day, this week, with an ailment of the upper body that wasn’t a concussion. “You are the one that likes that word,” the coach, Randy Carlyle, told a reporter, “so you put the diagnosis you want on that.”

Of the Nashville Predators, Chicago goalie Ray Emery said, “That’s a team you have to really play some boring hockey against.”

Szymon Szemberg from the IIHF had a word, this week, for Ottawa’s 40-year-old captain Daniel Alfredsson: indelible.

Sidney Crosby met with reporters in Pittsburgh to tell them about his sore jaw. “Felt it but didn’t see it,” he said of the slapshot that hit him. Still unable to chew solid food, he said he’d been living on milkshakes for nine days. Keeping weight on, he said, was “impossible.”

He laughed. “It hasn’t been too enjoyable.”

Colorado goalie Jean-Sébastien Giguère spoke up this week about his not-very-successful team’s attitude. “I don’t know what to say,” he said. “I’m beyond words.”

When he came back from beyond, he went on.

“Some guys are more worried about their Vegas trip at the end of the season than playing the remaining games,” Giguère said. He said it was “not constructive” and “embarrassing.”

“I’m embarrassed to be here right now. It’s not even funny.”

(The Avalanche won their next game, 4-1, versus Anaheim.)

In Dallas, Lane MacDermid sat out a game against the San Jose Sharks with an injury that coach Glen Gulutzan was upper-body injury but also not related to his head.

Helene Elliott of The Los Angeles Times was later pleased to clarify: “Stars coach Gulutzan says Lane MacDermid will be out a while because of chest contusion. Had coughed up blood. Heals only thru rest.”

Over to Philadelphia. Ilya Bryzgalov, the goalie there? He was “not upset” that Steve Mason would be starting for the Flyers instead of him. He was “tired and sore.”

Also: “Stats not always reflect what’s real,” he said. “I remember once Wayne Gretzky told me stats are for losers.”

Toronto beat the New York Rangers this week, after which Rangers’ goalie Henrik Lundqvist declared that they are, as The Toronto Star proudly put it, for real. “They’re good,” Lundqvist said. “They’re quick. I still think I have to be better because of that. They’re a sharp team and have some really skilled players up front.”

Philadelphia defenceman Marc-Andre Bourdon was talking this week. He hasn’t played since November of last year, when he suffered a concussion. “My eyes are off,” he said. “I have lots of headaches.”

I am a competitor. I want to play. It’s tough to sit down. But I needed to shut myself down and think about myself and my life and not hockey.

On the subject of Buffalo’s fans booing their own team, Steve Ott had his say on the Howard Simon Show on local radio station WGR 550. “I think it’s completely ridiculous, to be honest with you,” he said.

It is. It’s disheartening when we did get hemmed in our zone and they’re basically mocking us when you get up past the blueline and you finally get it in their zone after, I guess you’d could say, that minute-and-a-half shift when they didn’t have a scoring opportunity.

I guess you can say it was more the mocking of my teammates and everything else that probably pissed a lot of guys off, including myself. I mean, you’re a fan of the Buffalo Sabres and hopefully you come to cheer us on and motivate us to be good.

I don’t care how frustrated anybody is. Negativity breeds negativity, and if you want to see a bad product on the ice, and continue to boo, what do you expect? You’re obviously going to get a negative result.

“You gotta understand every year I get older and older,” said Bryzgalov, almost 33. “I’m not getting younger and younger. Believe me or not, some veterans tell me how could you be tired? I said wait until you get 30. You can feel everything. Your body changes.”

On Long Island, the New York Islanders beat Philadelphia and the fans chanted: “We Want Playoffs!”

“Anyone else hoping for a Montreal/Toronto first round?” said Jason Kay of The Hockey News. “Last time they met in the playoffs was 1979, a 4-0 Habs sweep.”

As the week went on, lots of people seemed to be, up to and including everybody at Hockey Night in Canada, who talked about it all game, Saturday night, as the Leafs were beating the Habs 5-1. Pierre LeBrun from ESPN muttered a little prayer: “Habs-Leafs in the first round? Hockey gods, please make it happen.”

Ilya Bryzgalov: “In general, I don’t have major injuries. But you’re sore here, you’re sore there. Every day, it’s something new.”

“Show me a good goalie and I’ll show you a good coach,” Don Cherry offered.

Rangers’ defenceman Marc Staal told The Globe and Mail about the getting hit, horribly, above the eye with a puck. “It’s been tough,” he said. “My wife didn’t sleep for the first four nights because she was just wiping blood off my eye.”

Tom Gulitti of The Bergen Record heard from Ilya Kovalchuk of the New Jersey Devils, who’d missed seven games with a right shoulder injury. Kovalchuk had watched the games, all losses, on television with his 7-year-old daughter, Karolina. “Daddy, I think they really miss you,” she told him. “You’ve got to be back.”

Another headline at philly.com this week,

prompted a flurry of denials from the Flyers. Coach Peter Laviolette and several players said nope, not so, while others (no names) confirmed that he did indeed “doze off” during a team meeting on Monday, not to mention “definitely had his eyes closed,” and “it was a big topic of conversation amongst players.”

It could have been a protest. Maybe narcolepsy? “Whether he was actually sleeping or not, no one knows for sure,” said one player who didn’t want his name named. “It seemed like he may have been doing it to get a rise out of other players. I’m not really sure why he did it, or if he was faking it. Either way, it seemed to catch and lot of people by surprise and angered a few people.”

Watching the Masters, Slava Malamud, senior writer for Russia’s Sport-Express, tweeted, “Here is my opinion on the whole golf thing. It should have goalies. That is all.” 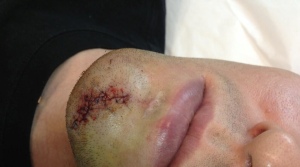 “Yessss Barca!!!!” tweeted Alex Ovechkin this week. Also, speaking of him and his Twitter account, if you don’t want to miss, as I did at the time, close-up photos of the gore involved when you get a puck in the chin followed, later, by other photos of the same chin with 22 stitches in it, then you should maybe check his feed more often.

Dave Feschuk of The Toronto Star asked Joffrey Lupul about his head. Concussed?  “Yeah,” Lupul told him. “I mean, no one’s really said that word to me. But I definitely didn’t sprain my ankle.”

“What is a Luddite?” Don Cherry wondered.

Brad Marchand of the Bruins was someone else who might or might not have sustained a concussion. Kevin Dupont was there to hear coach Claude Julien’s word on why he wouldn’t be giving the word: “We’ll let our doctors give us the word.”

The Ottawa Senators scored a powerplay goal with five-and-a-half minutes left in the game to beat Philadelphia this week. The penalty was Claude Giroux’s, four minutes for high-sticking Mika Zibanejad. “I tried to lift his stick,” Giroux explained later, “and he moved his stick, and I hit him in the face. Obviously it was not good timing, but stuff like that is going to happen.”

Ilya Bryzgalov eventually got around to responding to the stories of his sleepiness. He wasn’t happy when he met with reporters. He spoke, one paper reported, “in a calm but hurt tone,” and said this: