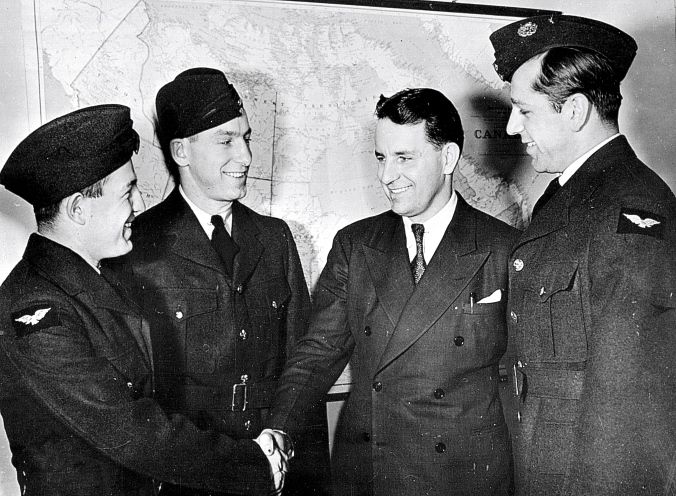 Boston’s Kraut Line departed the NHL on February 14, 1942, which is when they became Aircraftman, Class 2, for the Royal Canadian Air Force. Here, in a photo passed by military censors for general distribution, they are, from the left: Radio Mechanic Bobby Bauer; Physical Training Instructor Milt Schmidt, Clerk Accountant Porky Dumart. Extending a welcoming hand is Bill Touhey, coach of the RCAF Flyers, who was behind the bench three days later when the Krauts lined up against their old team in an Ottawa exhibition in aid of the RCAF’s Benevolent Fund. The depleted Bruins lined up with Frank Brimsek in goal that night; skaters included Flash Hollett, Roy Conacher, and Jacksons Busher and Art. With their new first line, the Flyers (said The Globe and Mail) had been transformed overnight into outstanding favourites to win the Allan Cup. Pickles MacNichol was their high-scoring secondary centre and in goal was Len Pinke, formerly of the AHL’s Springfield Indians. They played the Ottawa game before an Auditorium crowd of 7,604. Final score: 5-5. The air force rookies might need a few games to adjust fully to their new team: all they could muster were matching pairs of Schmidt goals and Bauer assists. The Globe:

Against the faster Bruins they provided a blend of brilliant yet spotty hockey which always pleased the dignified audience comprised in part of high-ranking military chiefs and Cabinet Ministers.

As for the Bruins, they lost the first three NHL games they played Krautsless. (In the trio’s farewell on February 10, they’d contributed 11 points to an 8-1 win over Montreal in Boston.) The team turned it around in March, though, going 4-3-1 and beating Chicago in the Stanley Cup quarter-finals before bowing to Detroit in the semis on the last day of the month.  A few days later, at the Forum in Montreal, 3,000 fans showed up to watch the RCAF Flyers practice. They’d just eliminated the Glace Bay Miners; next up, the Quebec Aces, who they play for the Eastern Canadian Senior title. Bauer was injured but (said The Globe)

The Flyers beat the Aces, which meant they were still playing at the end of April, taking on Port Arthur’s doughty Bearcats, and beating them, to win the Allan Cup.

More on Boston’s Krauts at war here and here.