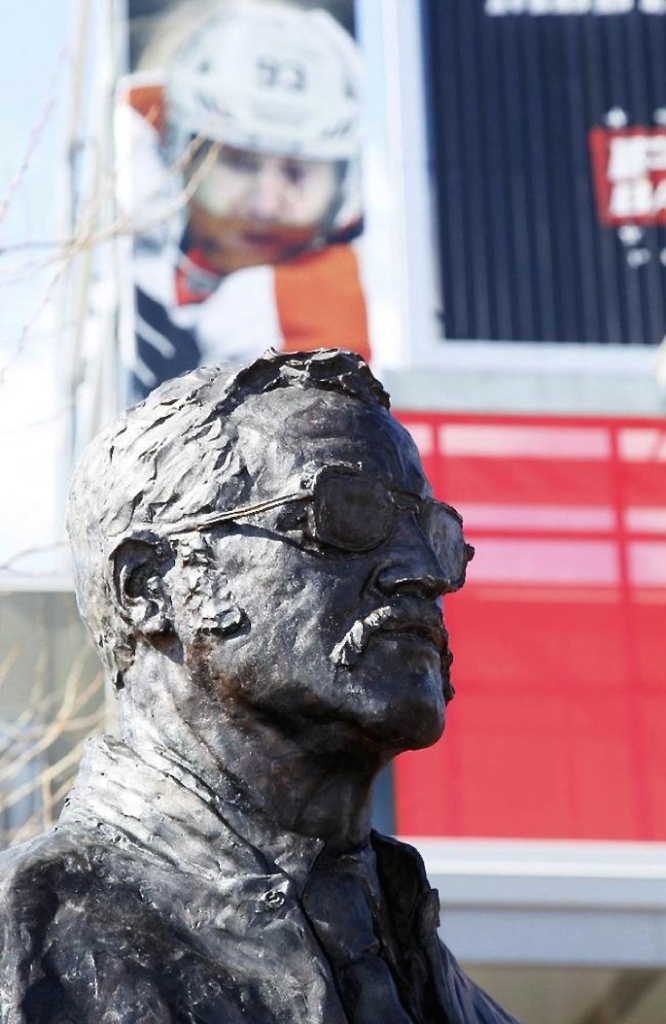 Coach Fog: Four months after Fred Shero was inducted into the Hockey Hall of Fame in Toronto, the Flyers unveiled a statue of their championship coach on March 15. Sculptor Chad Fisher’s 8-foot, 1,300-pound bronze work stands on the site of the old Spectrum. Bernie Parent, for one, was pleased. “This statue,” he said, “will be standing in the heart of Philadelphia as a reminder to all fans back then, all fans now, and all fans to come, that Fred Shero was truly the best coach one of the best human beings this city has and ever will see.” (Photo: Chad Fisher, http://www.fishersculpture.com/)

After the Rangers won the 1994 Stanley Cup, the team’s first championship in 54 years, they fulfilled the words of their coach, Mike Keenan: “Win this, and you’ll walk together forever.”

Yes, true. On June 14, 1994, as the Rangers prepared to meet the Canucks in Game Seven, Mike Keenan gave what his captain would call one of the best speeches he’d ever heard. Rick Carpiniello recounts this in Messier: Steel In Ice (1999):

“Go out and win it for each other, and if you do, you will walk together for the rest of your lives,” Keenan told the Rangers.

“He seized the moment,” Messier said. “He took control of the situation. We needed it at the time. Mike came through when we needed him most. Everything he said hit home, to everybody. It was incredible. It got us back on track.”

But credit where credit’s due. Aykroyd, Carpiniello, and Messier fail to mention the man — a Rangers’ coach of another era — who not only said it first, 20 years earlier, but proved that it worked.

Everybody knows this, right? Before he got to the Rangers, when Fred Shero (a.k.a. The Fog) was coaching the Philadelphia Flyers, he used to leave his players messages on a blackboard in the dressing room, a koan here, an adage there, words to challenge and spur the spirit. Going into Game Six of the finals against Boston in May of 1976, the Flyers had the chance to wrap up the series and win their first Stanley Cup. Lose and they’d have to go back to Boston. Shero worked his chalk. Rick MacLeish scored. Bernie Parent shut, as they say, the door.

Miracle Flyers Take The Cup and

the City Goes Wild with Joy!

read the front of The Philadelphia Inquirer next morning.

A quick history of Shero’s chalk-talking would have to go back a few years. Shero himself steers clear of the blackboard and its uses in the book he wrote with Vijay Kothare, Shero: The Man Behind The System (1975). According to Jack Chevalier in The Broad Street Bullies (1974), it dates to the coach’s second season with the Flyers, 1972-73, when he wrote a note about team commitment before a big win. “Ever since, Shero has been hungrily searching for clever passages and slogans to circulate among the team or to give to a particular player.”

“Ahhhh,” said captain Bobby Clarke at the time. “I look at them and laugh. I can’t remember any, because there’s a new one every day. I wonder where he gets ’em.”

“They used to laugh at first and dream up funny things to write beside my messages. But now they act like it’s something sacred. They’d never erase it.”

With Shero gone — he died in 1990 — the central repository of Shero’s blackboard wisdom resides in Rhoda Rappeport’s Fred Shero (1977).

“An oak tree is just a nut that held its ground,” he wrote one night.

And: “A barking dog is often more useful than a sleeping lion.”

“Four things come not back — the spoken word, the sped arrow, the past life and neglected opportunities.”

“If he read this stuff to us, it wouldn’t work at all,” defenceman Barry Ashbee told Chevalier. “It’s corny, and some guys still laugh. But if you really look at the quotes, there’s a lot of life in there.”

Shero could sound a little bashful, talking about his sloganeering. “I just ran across a couple of good ones last year,” he said 1974, “and tried ’em out. Before that I guess I coached like everybody else. Now I find these things in books, magazines — everything I read.” Chevalier:

His sources range from the life story of Washington Redskins coach George Allen to an article entitled, ‘Ten Lost Years — A History of Canadians During The Depression.’

On his bulletin board is an Edgar Guest poem, ‘Team Work,’ neatly typed on Flyers stationery. Each player got a copy. He also passed out a fan’s poem, ‘It’s All A State of Mind.’ The first line: “If you think you’re beaten, you are.’ From an old Saturday Evening Post, Shero clipped a Cadillac advertisement with an editorial entitled ‘The Penalty of Leadership.’

The consensus on Shero’s exact wording in 1976 seems to converge on: “Win today and we walk together forever.” That’s how son Ray Shero rendered it last fall when his late father ascended to Hockey’s Hall of Fame. That’s how they’ve got it, too, adorning the wall of the 12th-floor mock dressing room they built at NHL HQ in Manhattan, according The Instigator, Jonathan Gatehouse’s 2012 study of Gary Bettman in his natural habitat.

Not everybody agrees. Variations include:

• “Win together now and we walk together forever.” Rappeport’s Fred Shero (1977)

• “Win together today, and we walk together forever.” Michael Goodman, The Story of the Philadelphia Flyers (2009)

• “If we win today together, we walk together forever.” Brian Burke citing Shero during the 2010 Vancouver Olympics.

A few further notes on Shero’s longest-lived maxim might touch on:

“Thirty-nine years later, it’s safe to say that not only has that team not broken bond to this day, but the City of Philadelphia still has a love affair for a bunch of feisty Canadian kids. These kids helped define not only a franchise, but an entire city. They truly are walking together forever.”

• Mike Babcock, who had Shero on his mind when he was coaching Canada to victory at the 2004 World Championships in the Czech Republic. “When you win together, you walk together, forever, you really do,” Babcock was explaining to reporters going into the quarter-final against Finland. The Canadian Press listened in as he went on:

“Not for a week, but forever.”

• A speech of Shero’s own, delivered at a banquet of Philadelphia sportswriters in 1976, a few days after the Flyers beat CSKA Moscow in a notorious brutal January exhibition.

“I once told my players that if we win together now, we’ll walk together for ever. And they listened to me.

“I have only one goal left, to win a third straight Stanley Cup. And they’ll listen to me.”

• The account Bernie Parent gives in Unmasked of the big Boston win in ’74:

With 40 seconds left in the game, there was a faceoff in our end. In those days, you could stop the action before the ref dropped the puck.

I yelled, “Hold on!” I called Joe Watson over. Everyone thought we were talking about how we were gonna play the faceoff.

I said to him, “We win tonight, the women are gonna be lined up outside our door all summer long.” He screamed at me, asking me what was wrong with me. I just thought it was a good way to take some of the pressure off.

• The bitter soliloquy of Felix Batterinski, bruisesome hero of Roy MacGregor’s 1983 novel The Last Season, and a member (in fiction, anyway) of Shero’s championship and Soviet-intimidating teams. In the book (spoiler alert), the coach dumps his battering defenceman not long after the CSKA game leaving him souring over his beer in a bar:

I remember when we won our first Cup in ’74 and just before the final game the Fog wrote: “Win today and we will walk together forever.” Clarkie thought that wonderful; he’d repeat it to the rookies, use it again and again in the dressing room until we all got sick to death of it.

I felt uneasy inside. I wanted someone to tell me how hockey could overcome pain and wrong and death, death in particular — how did the Leafs overcome Bill Barilko’s death if it took them more than a decade to win another Cup? Explain that one to me, Fog?

As far as I was concerned the sayings of Freddie the Fog Shero were utter crap. On the night of May 19, 1974, the day we beat Boston to win the Stanley Cup, the Fog wrote down, “We will walk together forever.” We won.

On January 29, 1976, the Fog decided he was tired of walking with me. He didn’t even have the guts to tell me himself.

• Another blackboard message, in another time, another place, one that’s been rousing the troops since 1599. Well, maybe there was no blackboard. But credit where credit’s due. In Henry V, Act IV, scene iii, Shakespeare settles for a muddy field near Agincourt in France, where the king tells his scant army that he’d rather not go back to Boston for game seven:

He that shall live this day, and see old age,
Will yearly on the vigil feast his neighbours,
And say “To-morrow is Saint Crispian.”
Then will he strip his sleeve and show his scars,
And say “These wounds I had on Crispian’s day.”
Old men forget; yet all shall be forgot,
But he’ll remember, with advantages,
What feats he did that day. Then shall our names,
Familiar in his mouth as household words-
Harry the King, Bedford and Exeter,
Warwick and Talbot, Salisbury and Gloucester
Be in their flowing cups freshly rememb’red.
This story shall the good man teach his son;
And Crispin Crispian shall ne’er go by,
From this day to the ending of the world,
But we in it shall be remembered-
We few, we happy few, we band of brothers;
For he to-day that sheds his blood with me
Shall be my brother; be he ne’er so vile,
This day shall gentle his condition;
And gentlemen in England now-a-bed
Shall think themselves accurs’d they were not here,
And hold their manhoods cheap whiles any speaks
That fought with us upon Saint Crispin’s day.