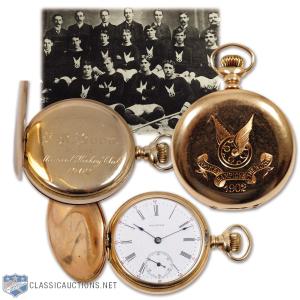 Shaker Style: Montreal’s Classic Auctions has on its block the golden watch that Montreal HC presented to Dickie Boon in 1902. He helped them win their third Stanley Cup that year and (just maybe) shook some hands when it was done. Bidding starts at C$5,000. The auction closes on June 17.

I don’t mean to pick historical nits, except when I do, which today … yes, nits will be picked. After all, if there’s anything we in the business of hockey retrospecting have learned in the weeks since researchers Carl Gidén, Patrick Houda, and Jean-Patrice Martel published Hockey Origins, their blockbuster debunkery of Canadian claims on the game’s birth, it’s maybe this: assume that everything concerning the game’s early days is written on ice until it’s proved conclusively that it can’t be effaced.

Jeff Z. Klein has a nice feature in today’s New York Times wondering about the origin of the beloved handshake with which hockey playoff series traditionally end. That it baffles the logic to witness an embrace between a player (see Prust, Brandon) who might previously have broken another’s jaw (see Stepan, Derek) only seems to make it more, Klein’s word, “special.” Sometimes, sure, a guy will promise to fucking kill several other guys (see Lucic, Milan), but as Klein writes, that’s rare enough.

So far so good. It’s when he follows Liam Maguire’s hazy path back towards the beginnings of the hockey handshake that the discussion strays.

Maguire is an Ottawa radio-host and published author, an NHL historian and prospective city councillor. He sometimes refers to himself as “the worlds [sic] number one NHL historian.” In May, he posted a recollection online about running into an old-timer, name of Lamb, whose cousin Joe had played in the NHL in the 1920s and on through the ’30s.

This was in 1980, at a retirement residence near Manotick, Ontario. Maguire and Mr. Lamb got to talking hockey. There was beer and there were scrapbooks. There, in the latter, something very, very interesting caught the young researcher’s eye:

Among the dozens and dozens of newspaper clippings was a very yellow parched story detailing an all-star game in 1908.

This was the Hod Stuart benefit game; the cover-point for the Montreal Wanderers had died in a diving accident two months after helping his team win the 1907 Stanley Cup. The memorial game was a sell-out at the Montreal Arena, with a crowd of 300 or so raising $2,010 for his family. With Art Ross and Pud Glass in their line-up, Wanderers won, 10-7, defeating an all-star team featuring Percy LeSueur and Frank Patrick.

That day in Mr. Lamb’s room, in 1980 I was looking at a newspaper report of the game and some pictures. Among them was a picture of Art Ross of the Wanderers shaking hands with Frank Patrick from the all-stars. Looked totally normal, something we’d see a million times. But then Mr. Lamb said, ‘Son, do you realize that this is the first handshake recorded in hockey?’

A significant juncture in hockey history, then — very important. Until that moment, Maguire told Klein this past Friday, hockey players never shook hands. Are you kidding? There’s no way. The game was too violent in those olden times. But a man had died, a friend, a fellow, a teammate. This was different, and they shook. “It’s as plausible an explanation as exists,” Maguire said, “and I’ve done quite a lot of research on it.”

According to Maguire’s senior source 34 years ago, the practice spread from there — by hand, if you like: Art Ross and the Patrick brothers kept it up during subsequent Stanley Cup challenges, along with the rest of the players from the 1908 game. Thus the tradition began.

It’s a good story and, yes, plausible, even if you’re willing to believe that the clippings in question featured photographs of the Hod Stuart game. I confess I’m skeptical on that count — you rarely see hockey photos in the papers from that era — though I’d be pleased to be shown I’m wrong.

Did the players shake hands at the end of that game? Why not — probably so. The same contemporary accounts I’ve seen that don’t feature photos fail to mention handshakes, but that doesn’t mean they didn’t happen. I’d bet they did.

They weren’t, however, the first recorded in hockey.

I have no idea when those happened. As the Society for International Hockey Research offers in today’s The New York Times, those origins still await discovery.

What I can report is that a hasty call on the archives tells us that there was handshaking in, for example, 1905, when Smiths Falls went to Peterborough to play the Toronto Marlboros for the OHA senior championship. Percy LeSueur was the Smiths Falls goaltender, as it happens, so maybe he was the one to carry the tradition forward. The Marlboros won 9-3. “Instances of dirty work were numerous on both sides,” reported The Globe, and yet:

The players shook hands after the match, and all the old scores appeared to be considered wiped out.

Before that, in 1903, the Montreal Hockey Club was one of the teams to win a challenge for the Stanley Cup. Future Hall-of-Famers Jack Marshall, Tommy Phillips and Jimmy Gardner were on that team, and the Montreal captain was Dickie Boon, who went on later that year to found those future handshakers, the Montreal Wanderers.

In a three-game series, Montreal HC beat the Winnipeg Victorias, captained by Rod Flett. It was a 4-1 win that finished the job at the Montreal Arena. It was a great game, according to Montreal’s Gazette, “of lightning variety” and “more than stiff” in the checking. There were confrontations between players — “an exchange of personalities” one of these, wonderfully, is described — and spectators, excited, expressed themselves by littering the ice with “coppers.”

Just before the game ended, Winnipeg’s goalscorer, Billy Keane, swung his stick at Montreal’s Phillips, who had three goals of his own. Keane was banished for the rest of the game, and that’s all there is to tell, really. The puck went up and down, then the gong gonged: Montreal had won. And so: