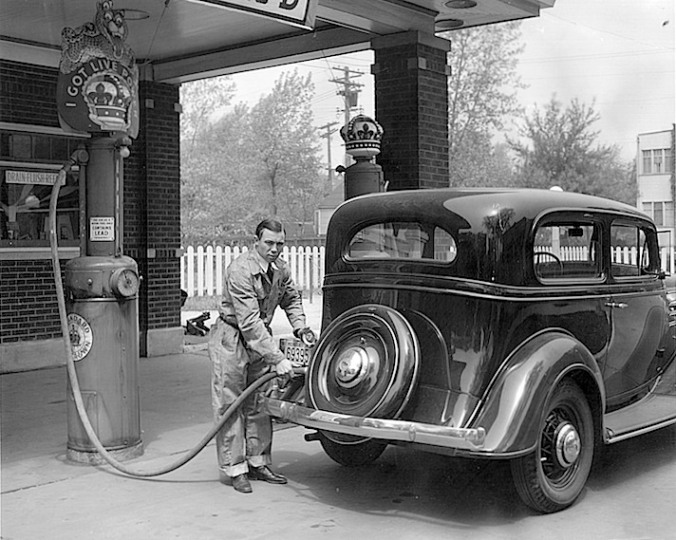 All through the winter of 1934 and into the spring, Harold March laboured on ice, skating the right wing for Chicago’s Black Hawks. Mush, they called him, so you can, too: sturdy and small and demon are some of the adjectives he went by in his day as a hockey player. Born in Silton, Saskatchewan, he’s remembered for having scored the first-ever goal at Maple Leaf Gardens in 1931: he beat Toronto’s Lorne Chabot. (March still had the puck when he died in 2002: he kept on his bedroom dresser.)

When, in April of 1934, Chicago won its first Stanley Cup by beating the Detroit Red Wings, March was the one to clinch it. In the last of the series’ four games, after four and a half scoreless periods, March took a pass from Doc Romnes. Scuttled is the verb the Montreal Gazette uses to describe how he got around Detroit’s Walter Buswell; that done, he slashed a shot that flashed waist high past goalie Wilf Cude.

A month later he was (above) working the pumps. In years to come he’d spend his summers as a golf pro, but in ’34 as a Stanley Cup hero he put on shirt and tie, brogues and a suit of coveralls and leased this service station from Standard Oil. It was at the corner of Kostner and Montrose on Chicago’s North Side, where a Jiffy Lube does its business today.