The 1954 Oxford touring team, left, poses with the home team in Grindelwald, Switzerland. The Swiss won the game that followed the photographing, 7-3. David Harley wears the C for Oxford; Denis Smith is third on his right.

I went to see David Harley a few years ago to talk hockey, which he was always happy to do, even though, as he told me that day, he didn’t have much time for the game we see now in the NHL. The two hours we spent going through the pages of a 50-year-old scrapbook of his took us far away from that, to another version of the game in another time, games played long ago at rinks in Grimsby and Blackpool and Southampton and in the frigid open air of Mannheim and Bolzano and Garmisch-Partenkirchen.

He was a lawyer in Toronto, and that’s where he lived for most of his life, but he was a proud New Brunswicker all that while, born in Saint John, schooled in Rothesay. I’m sad to write it: he died on September 1 at the age of 83. He was one of my father’s best friends, a man of immense kindness, good humour, and enthusiasm. Seeing how he conducted himself in the world I always thought, yes, right, that’s how it’s done.

He was a very good athlete. He played rugby at the University of Toronto, where he captained the varsity team while completing undergraduate and masters degrees in History. He went to Oxford as a Rhodes Scholar, and that’s where he got his law degree, at University College. He had his skates with him there, and with my father, Denis, who was studying Philosophy, Politics and Economics, he skated for the varsity hockey team. Both of them would end up as captains of the team before they returned home to careers and families.

Mostly they were Canadians who lined up for the Dark Blues. The team played throughout England during term, and barnstormed the continent for several weeks each winter. The big annual match was the one in February against Cambridge, a tradition that started in 1900. David and my father both got their introduction to the inter-varsity rivalry in 1954, when Oxford prevailed by a score of 7-4. In the program from that game, David is introduced as “a left shot but a high-scoring rightwinger.” He was 22. He scored a pair of goals; the Oxford Mail admired his “sparkling solo runs.”

I read about the 1955 match in his scrapbook. The Daily Express account wasn’t one I knew. Teammate Ian MacDonald was “the cool executioner,” scoring four goals in two minutes. He didn’t stop there: he had nine to his name before the game was over. “Hapless Pettigrew,” the paper called the Cambridge goaltender, John, a friend of my father’s from Montreal. Friendship could be why he limited himself to putting just four pucks into the net. John Duby, a defenceman, was the only Oxford player who didn’t notch a goal. David scored twice. In the program, he’s identified as “the club’s leading playmaker.” Over on the Cambridge page, all the players’ nicknames are noted: Gru, Weevil, Buck, Kipper, and Harry the Horse are some of them.

A crowd of 6,000 looked on at the Richmond Ice Rink. With three minutes left and a tally of 27-0 on the board for Oxford, a Cambridge supporter said, “You wait, the game ain’t over yet.”

Final score: Oxford 29, Cambridge 0. There’s never been a bigger whomping in all the history between the two teams.

“Harley Routs Cambridge” was the Daily Express headline in 1956. He wore the C in that game, and a pair of glasses. The News Chronicle noted that without the efforts of a new (Canadian) Cambridge goaler, Fred Meredith, Oxford would have exceeded the previous year’s score. 11-1 was all they could manage in the event. The Chronicle:

David Harley, with his rink-length scoring dashes, was the man Cambridge could not hold.

He scored Oxford’s first four goals — assisted in two others, and then cracked home the eleventh in the final seconds. 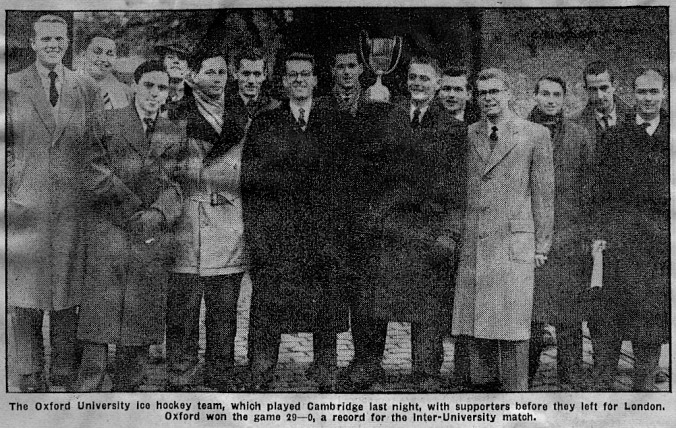 One thought on “the man cambridge could not hold”