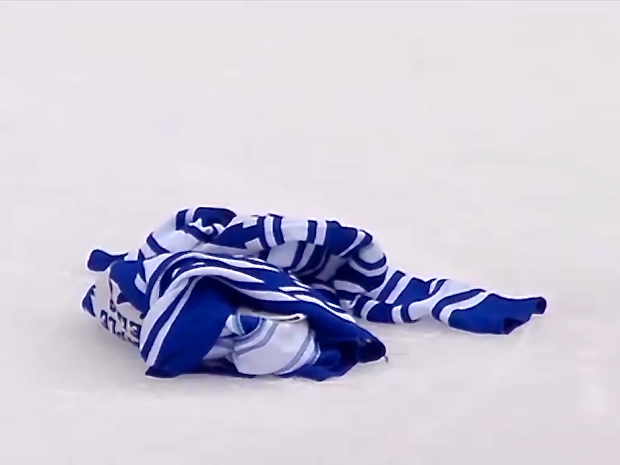 A fan leaving the game with seven minutes remaining in the third period tossed his Leafs sweater on the ice to the left of Penguins goalie Marc-Andre Fleury. Calls for coach Randy Carlyle’s job will start to flow if the Leafs don’t win soon … There’s no question that James Reimer should start versus the New York Rangers on Sunday in Manhattan, which probably was the plan no matter what happened against the Penguins. Bernier already could use a mental break …
• Terry Koshan, The Toronto Sun
October 11, 2014

Linesman Don Henderson moved in, scooped it up, bunched it to himself like sinful laundry that had fallen to the cathedral floor. He had it handed off the ice and out of sight so fast that it seemed as though the delicate modesty of the whole Air Canada Centre depended on his urgency.

The Leafs were losing, of course. Had lost their season opener, against Montreal, were following that up with an ugly showing against Sidney Crosby’s Penguins. They were getting hammered, as Cathal Kelly wrote for a Thanksgiving Monday’s column in The Globe and Mail, when …

some lonely hero without any real problems trod down to ice level and chucked a $150 Toronto jersey onto the ice. The ACC crowd responded with roars, clapping him up the stairs and out into the night.

The meaning of the gesture was lost on no-one. That didn’t it didn’t have to spelled out and probed and glossed in the press. “It seems the fanbase’s patience is beginning to wear thin,” Kaitlyn McGrath wrote in The National Post. Mike Zeisberger of the Toronto Sun called the anonymous fan disgruntled. And: embittered. Other fans, nearby, high-fived him as he departed the rink. That’s what reporter David Alter saw.

The scene was reminiscent of the Tank Man at Tiananmen Square. Except completely pointless, as well as annoyingly bourgeois.

Uncrushed by armour, the guy seems not to have been charged by police, either. That happens, of course, sometimes. I guess because he was leaving the building he didn’t need to be ejected by staff. Is he now banned? No-one seems to be mentioning anything like that.

No matter how ticked you might be, chucking anything onto the ice — be it jersey, waffle, other breakfast food, etc. — is unacceptable. Don’t be idiots. Boo, hiss, jeer if you want, but let it end there.

Because — danger? Tossing stuff on the ice is a hazard to those who skate there, which is why the NHL bans it and deals so severely with the tossers (octopi excepted, mostly). Never mind that, historically, stuff-tossing has been as much a part of the game as, oh, I don’t know, players punching one another in the head. The point is, it’s not civil, it’s unsafe, nobody wants to be associated with a sport in this day and age where that kind of thing would be tolerated. 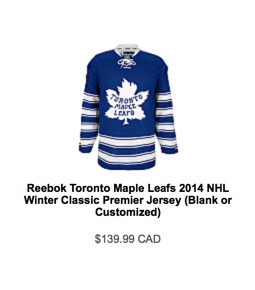 Reporters asked players what they thought. Toronto captain Dion Phaneuf said that the team took responsibility for not giving the fans what they want.

“Very disrespectful,” Nazem Kadri said, and “I don’t know what his deal was.” Also: “We don’t need fans like that.”

Sidney Crosby? His heart went out to the Leafs.

The fans are going to make their opinions known or show what they think, but it definitely doesn’t help things. I’m sure with it being so early, it’s not fun to see that in your home rink. I think you feel for guys.

“Frustrated fan,” Toronto coach Randy Carlyle said on Sunday. “Frustrated with the way the game was going and we were equally frustrated.”

That’s not how the late Pat Burns would have taken it. Are you kidding? He would have been seething, not to mention swearing. That’s according to his biographer, Toronto Star columnist Rosie DiManno, who turned her dudgeon to high on Sunday, given that the former Leaf coach isn’t around to do it himself.

Moron, she wrote of the guy who’d shed his shirt in a hissy-fit. Stinky scuz! She noted the league’s prohibition and also the inconvenience of the delay caused. She said it was an insult to every joyful child who ever received a Leafs sweater on Christmas morning. I think that was in earnest, though maybe DiManno was being droll at that particular point. I did like the bit where she raged against the timing:

But geez Louise, it was Game 2. A little premature dejection, don’t you think? What are you, schlemiel, going to throw on the ice in the dog days of February? Your pants? A camper stove? Your mother-in-law?

Saturday night, the Leafs left for New York after the game — fled, said Cathal Kelly. Playing the Rangers there on Sunday night, they won 6-2. Former Leaf @16DarcyTucker took to Twitter when that was over: