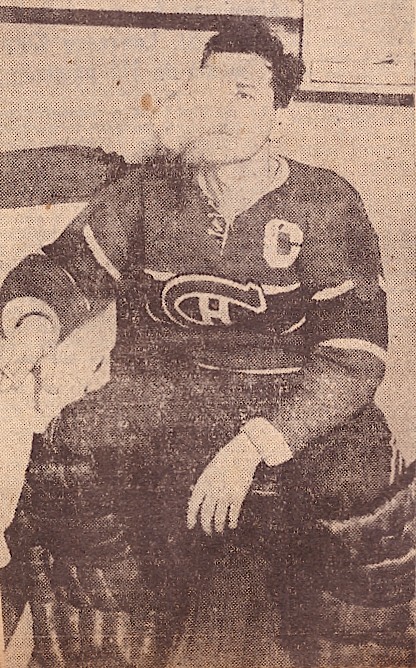 There’s lots you could say about Bill Durnan. Maurice Richard volunteered that he was one of the nicest guys in the whole world — “He had a smile for everybody and never said a word against anyone” — not to mention that he was said to be the best softball pitcher in Canada during the time he was minding the nets for Montreal in the latter 1940s. He did that exceptionally well, of course, winning Vézina trophies in each of his first four campaigns, as well as two more subsequently: an amazing six in the seven NHL seasons he endured. He won two Stanley Cups with the Canadiens, in 1944 and 1946. In 1964 he ascended to the Hall of Hockey Fame.

And yet: they used to boo him at the Forum, hound him with jeers. After some games (Richard was one to recall), he’d return to the dressing room crying. “We want Bibeault,” the fans would holler the year of that second Cup, calling for Paul, the Montreal back-up. Another year, Dink Carroll reported, “the fans would deride him … with mock applause when he made a stop.”

All of which is to say, it’s no wonder the man had nerves. Not so shocking either that he sought to calm them with a post-game smoke. From our modern-day perspective, it is surprising, just a little, to find one of the man’s post-game cigarettes preserved in photographs: that’s something you do sometimes see in hockey scrapbooks and archives, but not so much.

La Presse ran the one above in the spring of 1947. It’s not a great reproduction, but if Durnan’s face is obscured, that’s largely due to the cloud of smoke he’s just exhaled. You can just see the cigarette in his right hand. It’s more obvious in the photo below, from the same night, wherein Durnan poses alongside teammates (from the left) Butch Bouchard, Roger Léger, Richard, Billy Reay, and Buddy O’Connor. The caption for the former reads:

The first thing he did upon entering the locker room was to take a cigarette and light it. He removed his pads only after his relaxation was complete.

It was the first game of the 1947 Stanley Cup final and not a particularly stressful one for Durnan, by all accounts. He’d shut out the Toronto Maple Leafs at the Forum by a score of 6-0. Tame, Montreal’s Gazette called it. “The boys got that for me,” the goaltender said — or in the paper’s telling grinned. “I had a good seat.”

Something else he’s supposed to have said (according to Dick Irvin, Jr. in his 1991 oral history, Habs), “How did the Leafs get this far?” They were eager to demonstrate, of course, and won the next game 4-0 and three more after that, too, to take the Stanley Cup. “I think it’s by far the toughest series I’ve ever played in,” Toronto’s Howie Meeker recalled, citing Turk Broda’s goalkeeping as the key for the Leafs. “I think when it’s all over and you have won the Stanley Cup, your goaltender has to be the best guy on your team. That year Broda was. I thought he was head and shoulders above Durnan, and Durnan was good. We were outplayed and outchanced in scoring chances, I would think, by about three to two. Turk Broda was the guy who won that series.”

Also worth a note is the C adorning Durnan’s sweater. The accepted wisdom is that he didn’t become a Canadiens captain until the 1947-48 season, specifically assuming the role in January of 1948 when the incumbent, Toe Blake, suffered the ankle injury that would prove the end of his playing career. That’s the timing suggested, as well, by modern references, from the Habs’ own historical website at Our History and the Hockey Hall of Fame’s to Wikipedia and Hockeyreference.com. From the photographs here, it’s clear that he was co-captaining the team a season earlier, too.