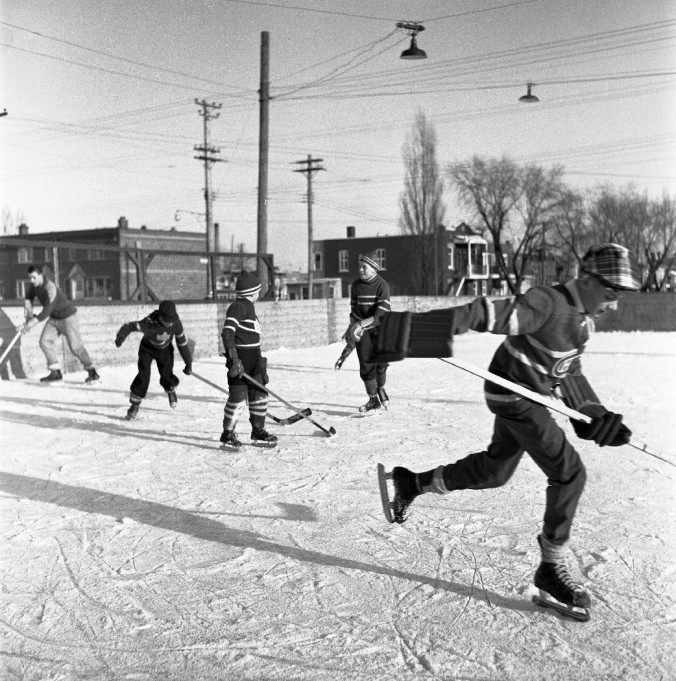 Minnesota’s Ryan Suter paid US$81,058.72 to elbow Pittsburgh’s Steve Downie in the head. That was a while ago. More recent was Zac Rinaldo, of Philadelphia, for whom the price of charging Kris Letang from the Penguins, and also boarding him, was US$73,170.72.

And Dan Carcillo? Of Chicago? For him, the cost of cross-checking Winnipeg’s Mathieu Perreault and upper-body-injuring him was US$40,243.92

It’s a while back, now, hard to recall, but Randy Carlyle was coaching the Toronto Maple Leafs earlier this year. On his last day on the job, he was in North Bay, Ontario, when GM Dave Nonis called him to set up a meeting early next morning in Toronto. “I’m not going to drive five hours back and through a snow storm to get fired,” Carlyle told him. “You might as well do it now.”

“We’re trying,” Toronto’s Phil Kessel has said subsequently, of the losing Leafs. “I don’t know if people see that. We are trying. I don’t know. We can’t find it right now.”

At The Walrus, the new editor, Jonathan Kay, profiled the Kelowna man who steered a 10,000-pound truck to the 2012 World Freestyle Championship at the Monster Jam Finals in Las Vegas. “It’s hard to imagine a more gentlemanly monster trucker than Cam McQueen,” he wrote. “He’s like the Jean Béliveau of car crushing.”

Via Aaron Portzline, meanwhile, of The Columbus Dispatch, we got to know the Blue Jackets All-Star goaltender Sergei Bobrovsky, who comes from Novokuznetsk in Russia, where the average temperature in January is -18 degrees and (quote) living in the Siberian city of 600,000 is neither easy nor glamorous.

As a six-year-old there, Bobrovsky wanted to play in goal. When his family couldn’t afford to buy equipment, his coach, Alexei Kitsyn, bought (says Portzline) “some bulk leather.”

“He made the equipment for me,” Bobrovsky said, his eyes getting big with emphasis. “He made it. By himself. By his hands. He made the pads and the glove. My parents bought me the rest of it.” …

“It sounds crazy,” Bobrovsky said. “If you know how some kids today get the best gear, how much money they spend … and that’s how it started for me.”

Another Columbus All-Star was ruminating this week, Nick Foligno, son of former NHLer Mike. “My dad has always said that if you treat the game of hockey well, it will treat you well,” Nick said. “He’s been bang-on with that.”

“Morale is good,” said the Leafs’ new coach, Peter Horachek, at some point.

Some people who complained about how ugly the NHL’s All-Star uniforms wondered if there was a bunch of BMXers somewhere from whom they’d been stolen. Said the guy who designed them for the NHL: “We wanted to do something with this uniform that made the idea of a hero coming alive.”

Jack Todd from The Montreal Gazette:

I don’t know what’s uglier here. The All-Star Game uniforms or the team selection. We get Bobby Ryan with his 12 goals and 16 assists, the guy who can’t spell “intense.” We get Phat Phil Kessel, who is to the Maple Leafs what dry rot is to a house. Thanks to fans with devices in hand, we get an entire Blackhawks unit and Zemgus Girgensons, whose name is better than his game: 11 goals, nine assists and a minus-6.

Tweet from James Mirtle from The Globe and Mail:

Leafs should have just made Horachek the interim coach at the start of the season. Skipped the 40 games of blech.

“We need to have the puck more,” said Brendan Shanahan, president of the Maple Leafs.

Raw emotion and passion are inside of Teemu Selanne, said Eric Stephens of The Orange County Register, and they always have been.

Milan Lucic from the Bruins reflected on the turn of one year to the next. “It wasn’t a good 2014,” he told Joe Haggerty of Boston’s Comcast Sportsnet. “I’m happy it’s over. I’m looking forward to 2015, so hopefully we can turn things around.”

Toronto captain Dion Phaneuf said he believed there is a “sense of urgency” for his team.

“Everything kind of happens in threes,” according to Ryan Miller, Vancouver goaltender, apropos three things that happened.

NHL commissioner Gary Bettman: “Our fans tend to be the best educated, most affluent, the most tech savvy and the most avid.”

David Perron tweeted, “Thanks to the classy people of Edmonton for their support!” This is going way back, again, to when he was traded from Oilers to Penguins. “@Edmonton Oilers is a fun team to play for and hope it turns around #OilCountry”

He scored in his first game for Pittsburgh, Perron did, Sidney Crosby set him up in a 4-1 loss to Montreal. “That was probably the best pass I’ve ever received,” is what he told reporters after the game. “Over two sticks. I had a good portion of the net to put it in.”

San Jose’s John Scott talked, last month, about punching Anaheim’s Tim Jackman. He paid US $34,146.36 for that privilege, and was suspended for four games by the NHL.

Scott said he wasn’t even aware that it was Jackman approaching him from behind. The two tangled earlier in the season, leading to a two-game suspension for Scott.

“I didn’t even see him coming. I just felt something on my back and kind of reacted and turned and caught him right on the sweet spot, I guess,” the 6-foot-8, 259-pound Scott said of the 6-foot-2, 225-pound Jackman. “It was just a complete reaction kind of turn. I do that 10 times a game. This time I just tinked him right on the chin.”

Eric Cole, the Dallas forward, said he’s a better when he’s angry, according to Mike Heika of The Dallas Morning News. “I call him a bully on the ice,” said Dallas coach Lindy Ruff. “It’s like a bull rush all of the time. When he’s skating, he’s a physically dominating guy that’s hard to handle. He can go through the middle, he can go wide on you, he’s hard to knock off the puck. So, for me, that’s probably the most important thing in his game.”

The Associated Press wrote about P.K. Subban ascending, just before the Montreal defenceman wasn’t invited to the NHL’s All-Star game in Columbus:

Subban’s exceptional puck-handling skills, cannon-like shot and over-the-top personality have turned him one of the league’s transcendent stars. The 2013 Norris Trophy winner is as recognized on the ice as the red carpet, where he recently befriended movie director Spike Lee.

“Why do people find these Leafs so hard to like and so difficult to rally around?” puzzled Jeff Blair, from Sportsnet. (Answer: not really provided.)

Tampa Bay coach Jon Cooper talked about a Czech rookie he has on his team, Ondrej Palat. “I still believe Palat is the straw that stirs the drink on that line,” he said. “He’s oozing with hockey sense and he’s skilled. He is like Patrice Bergeron as a winger to me.”

He’s not speedy, the coach said, but he makes up for it with “work ethic and high hockey IQ.”

“When you’re with him he’s a quiet guy, he’s unassuming,” Cooper said. “But if you were to poll our team and ask for the role model for how to practice and play I would pretty much guarantee he would be the guy who would get all the votes. I can’t speak for our team but I think so.

“He competes, he works, he produces and he doesn’t say a word.”

Mirtle of the Globe on the Leafs:

Beyond the coach and what’s obviously a possession-bereft style of play, what ails the Leafs remains the same as the day Mats Sundin left in 2008.

They also lack a No. 1 defenceman.

Keith Ballard, a 32-year-old defenceman for the Minnesota Wild, said he didn’t know whether he’d ever play in the NHL again. Michael Russo wrote about him in the Minneapolis Star-Tribune, his road of recovery since suffering a concussion and three facial fractures on December 9. “Still experiencing symptoms,” he’s “ done nothing other than taking walks since the injury.”

Ballard said during his last concussion that he’s worried about his future and wants to make sure he’s healthy in his post-hockey career as a husband and dad to two children.

He said that again today.

“I’m not ready to decide that stuff, but knowing what we know about concussions, I have to think about the long-term,” Ballard said. “I’ve had three in 14 months, five in five years, not to mention all the times you get hit and say, ‘I’ve got my bell rung,’ and you’re dizzy for a period. That happens probably a lot more than people know. I have to think about the long-term effects, but again, I’m not ready to make that decision yet. But answering it honestly, yeah, I’m going to think about it.”

The Leafs couldn’t win. They couldn’t score, either, which may have had something to do with it: as the calendar turned to February, it was noted that never in the team’s history had they scored so few goals in all their Januarys.

Coach Horachek: “In order to move forward you can’t think about all the things that are being said or not being said.”

That seemed like sound policy. Does it also cover fans hurling replica Leafs sweaters on the Air Canada Centre ice as the Leafs were in the process losing? Because that was a thing in January that only seemed to stop when Toronto policemen ticketed the hurlers and the Leafs banned them from returning to the rink for a full year.

It offended the Leafs themselves, and made people like broadcaster Ray Ferraro worry about the potential for player injury. Dave Bidini:

Seeing a sweater on the ice reminds me of seeing a dead soldier. sick imagery and ugly gesture.

“You throw a sweater on the ice,” he also felt, “you soil your nest.”

“A real fan doesn’t do that,” twittered Liam Maguire, the world’s number one NHL historian. “Throwing a sweater on t\ice is the most reprehensible, gutless form of protest. Hope t\mischief charges stick.”