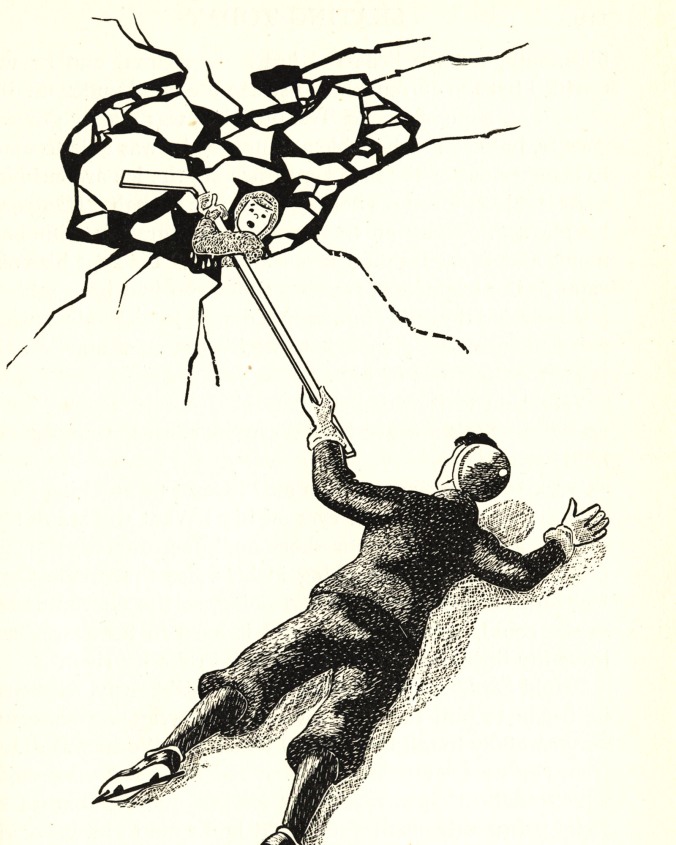 “We’re coming,” Joe shouted. “Don’t be afraid.” And as he skated he tried to remember all he had learned at Scout meetings about rescuing people who broke through the ice.

“It’s lucky I have this hockey stick,” he thought, for as he drew nearer the terror-stricken child and felt the thinner ice begin to crack beneath him, he carefully went down flat on his stomach and held the stick out in front of him, pushing it slowly closer and closer to the hole. Once his heart was in his mouth, for the little red head disappeared and he was terrified lest the current should sweep the child under the ice, beyond all hope of rescue. The little boy was plainly growing weaker, but even such feeble attempts as he was able to make to clamber out of the hole kept breaking the ice around him.

At last Joe shoved the hockey stick close enough. “Hang on,” he pleaded. “Hang on to the stick. Just grab it with both hands and Joe will pull you out all right.” He kept his voice calm so the frightened, freezing child who had been sobbing piteously and thrashing into deeper danger in his panic, quieted for a moment — long enough to notice the stout stick on the jagged ice in front of him.