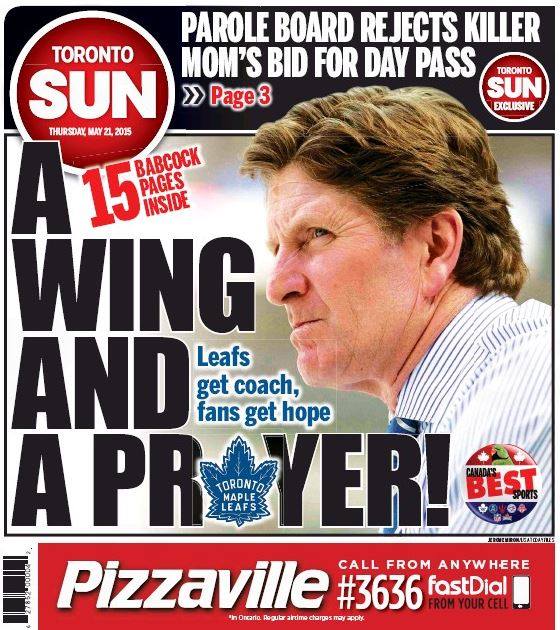 Except, of course, that Babcock is the 31st man to coach the Leafs. Dick Duff is the odd man out, relegated to a footnote in the team’s media-guide list of head coaches, untallied in the overall count that runs, now, from Alex Romeril to the pride of Manitouwadge, Ontario (Babcock’s hometown) by way of Saskatoon (where he grew up).

The Leafs, of course, are free to count their coaches in any way they so choose. But the case for leaving Duff out is cloudy, at best; the logic for including him in is at least persuasive as that associated with several other names who are on the list.

Duff’s tenure was brief, just two came in March of 1980, as detailed here. It came on suddenly, overnight, when the incumbent Floyd Smith was injured in a car accident on a Friday night. Smith had a couple of assistants that year, Duff and Johnny Bower, and on the Saturday morning ahead of an evening game, GM Punch Imlach put Duff in charge. “I told the players that Duff had absolute control of the team,” Imlach told reporters, “and I wanted them to do exactly what he told them.”

Still, it was a stopgap measure, no question about that, an emergency measure, a battlefield commission. Much like (minus the highway accident) the situation that the San Jose Sharks found themselves in December of 2002. In that case, GM Dean Lombardi had fired his head coach, Darryl Sutter, and a pair of assistants, named a Shark scout, Cap Raeder, as a temporary replacement. He did the job for precisely one game, a 3-2 overtime win over Phoenix, before Lombardi got a new coach, Ron Wilson, into place. According to the Sharks’ media guide, he was the seventh coach in team history, just as the man who succeeds the eighth (Todd McLellan) will be the ninth — i.e. no bumping about in the footnotes for Cap Raeder.

Brevity shouldn’t sink Duff’s cause. Maybe, then, Leaf management and asterisk lobbyists would argue that everybody knew that Duff wasn’t going to last, he was no more than a placeholder, a bookmark, filling a space behind the Leaf bench until the new, real coach showed up.

On that basis, Alex Romeril shouldn’t count, either — he was only doing the job in the latter days of the 1927 season until Conn Smythe finished up his coaching commitment with the University of Toronto Grads. And what about Peter Horachek, this year? Like Duff, he was an assistant who found himself appointed interim coach when, in his case, GM Dave Nonis fired Randy Carlyle this past January. Nobody expected him be in the job beyond the end of the season. He was, but only for a day or so: Brendan Shanahan fired him and Nonis on the Sunday after the Leafs played their final game.

Ah-ha (as the Leafs might say, and do, in this imaginary debate I’m having with them, whether they know it or not) — ha-ha, but Punch Imlach never spoke the magic word, whatever the GM might have mentioned about absolute control, Dick Duff was never officially anointed with those three all-important syllables: interim.

Is that true, though? On Monday, March 17, 1980, the day Duff coached his second and last game in the NHL, newspapers across the continent published a brief Associated Press notice that included the words Dick and Duff and named and interim coach. The AP would have got their information from some reputable source — maybe the PR people at the NHL? Likewise The Toronto Star, wherein readers of the small print in the sports pages might have seen this:

Is that enough to pluck Duff out of the margins and get him properly numbered as the fifteenth coach in Leaf history? I don’t know. Maybe Mike Babcock could put a word in for him.

Or maybe the next Leafs GM will take up the cause, whoever that is — the yet-to-be-named 15th in Leaf history. Or — sorry: the 16th. Assuming you’re not counting Harold Ballard, whom the team lists as both “acting” and “interim” GM for 1980-81, or John Brophy and Dick Duff, who served as part of a GM’ing committee in 1987-88, then next GM will be number 16. We know this because, according to Dave Nonis’ biography in the team’s 2013-14 media guide, he was the 15th GM “in franchise history.” That means they’re including Charlie Querrie, who did the job from 1917 through 1927, when the Leafs weren’t Leafs at all, but Arenas followed by St. Patricks.

Which, of course, aligns with the Leafs’ big plans to celebrate the centenary of the club in a couple of years. It’s going to be loud and it’s going to be proud, and what a great thing, too, to be celebrating all those early teams, the 1918 Stanley Cup-winning Toronto Hockey Club and the triumphant 1922 St. Pats. Both of which the Leafs count in their grand total of 13 Cup victories, even though the coaches from that era don’t, somehow, figure in the overall coach-count. I suspect there’s a good reason why those eight guys — the Dick Carrolls and Harvey Sproules and Eddie Powers — don’t make the cut, and if none of us knows what it is, I’m trusting that it’s been explained to Mike Babcock, the 30th, 31st, 38th, and/or 39th man to coach Canada’s team. 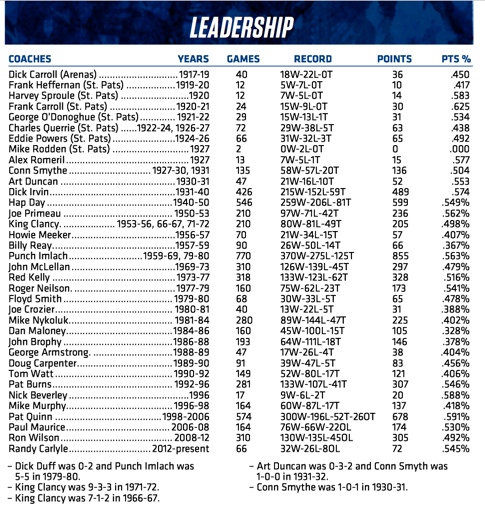 The Maple Leafs tally of coaches, from the team’s 2013-14 media guide.