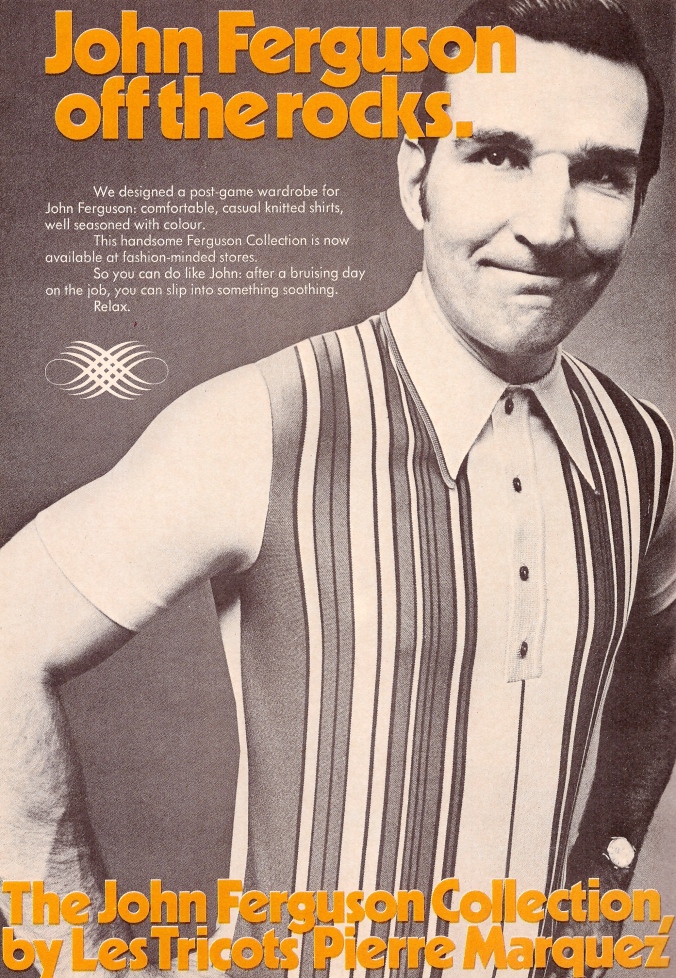 John Ferguson was 32 in 1970 when he decided the time had come to hang up his skates after seven hard-fought NHL seasons. His Montreal Canadiens had finished out of the playoffs that spring and he’d gone through the summer wondering whether it was time to go. Things had changed in the league, and Fergie was troubled.

He writes about this in Thunder and Lightning, the memoir he published with Stan and Shirley Fischler in 1989. “Expansion and the new breed of hockey player had combined to slowly, but surely, change the game’s values for the worse, I thought. More and more, the accent was on big bucks and selfishness. Agents were becoming as important in the lives of young players as their coaches. Respect for older players, team loyalty, toughness and discipline were values that gradually were being eroded.”

Maybe he’d play one more year. Would he? He went to training camp in the fall of 1970, played some exhibition games, hurt his arm. That was it. His mind was made up.

“At a press conference in Montreal,” he writes, “I told the media that I had decided to retire from hockey. … Naturally, the reporters grilled me. They wanted to know about specifics. Was it [GM Sam] Pollock? Who? I told them I had no beef with hockey or the Canadiens or Pollock or the club owners. I told them that, when I decided I couldn’t give one hundred per cent to hockey, it was time to give up.”

Knitwear played its part, along with horses. When he wasn’t playing hockey, Ferguson was in business with both. He was already president of Butternut Enterprises, a company owned by friends, that not only manufactured fine shirts, dresses, pants, and sweaters, but owned a bevy of racehorses: two trotters and seven thoroughbreds.

“Horses were in my blood,” Ferguson writes. But the threads meant something, too. He writes about that, too. “Some of my hockey friends thought it was paradoxical for a tough guy like me to be making a fashion statement with knitwear, but nobody ever teased me about it. I matched my colours and was never outlandish with my colour schemes.”

No, you wouldn’t tease John Ferguson about his fashion choices, would you? Above, he shows his stuff in ad from a November, 1970 Canadiens’ game program. Earlier that year, posing for another campaign in Montreal’s Gazette, the John Ferguson Collection promised “brave designs … masculine and bold. Styled with clean lines … powerful stripes … decisive trims. A manly knit in textured Cel-Cil Fortel®.”

The knitly man made a return to the ice the following year, of course. Habs’ captain Jean Béliveau called him up the following season, invited him to supper. They went to Ruby Foo’s, and Béliveau told him: “The Canadiens need you. Think about coming back.”

Ferguson was out of knitwear by then — so to speak: he’d sold his interest. After meeting Sam Pollock to talk contract, he rejoined the team for one final season. It was a good one, too, the last one also of Béliveau’s illustrious career, and the first for a young goaltender named Ken Dryden. The Canadiens won the Stanley Cup.