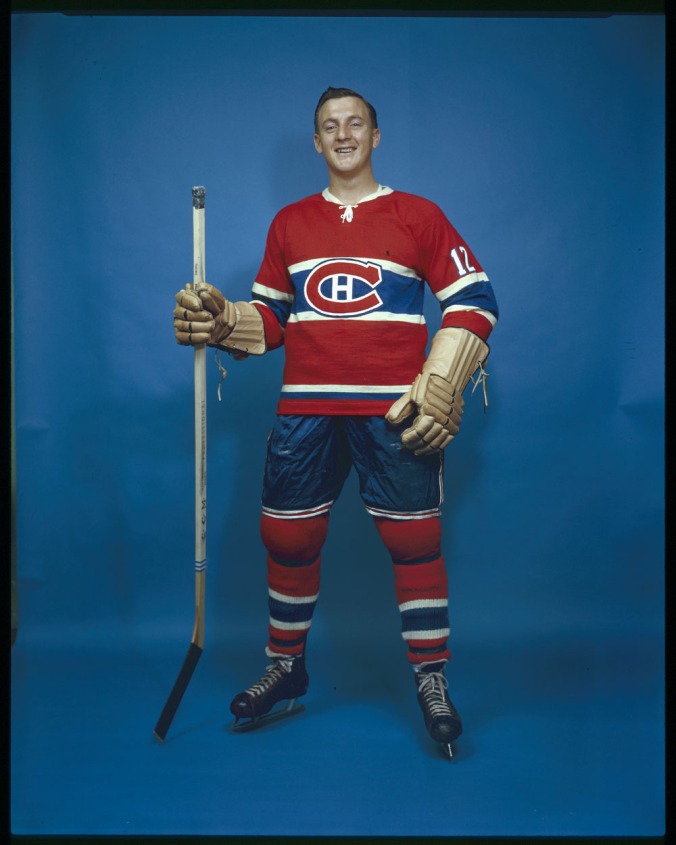 Dickie Moore was 84 when he died on Saturday in Montreal. A Hall-of-Fame left winger, he twice won the Art Ross Trophy as the NHL’s leading scorer. While he also turned out, later in his career, for the Toronto Maple Leafs and the St. Louis Blues, it’s as a Montreal Canadien that he’ll be remembered, a Habs’ legend on six of their Stanley Cup-winning teams through the 1950s. The New York Times has an obituary here — though better, first, to read Red Fisher’s heartfelt memoir of his long-time friend from Montreal’s Gazette. Then, maybe, these few views of Dickie Moore’s years on ice:

He was supposed to be headed for New York, the Rangers, in exchange for Dean Prentice, it was in the papers, except for, well, then, no. The Canadian Press reported that Rangers GM Frank Boucher called up Selke to say he didn’t have anyone of Moore’s calibre to trade, other than maybe Danny Lewicki. Selke: You can’t trade Lewicki, he’s playing too well. As Selke told it, Boucher said Prentice and Ron Murphy weren’t good enough and they left it at that. Next day, Rangers’ president General J.R. Kilpatrick phoned up to say he’d pay cash for Moore. “I told him,” said Selke, “we couldn’t play with cash.”

So he stayed, as did Mazur, though the latter was sent down to the Montreal Royals, and eventually found his way to Chicago. Three seasons later, Moore topped the league in scoring for the first time.

His nickname, of course, was Digging Dickie.

As a rookie for Montreal in 1952, he played with Elmer Lach and Dick Gamble on what was described as the league’s most torrid line. His most famous linemates: Maurice and Henri Richard.

Adjectives that appear next to his name in the register of Hall-of-Famers include aggressive and robust. Stan Fischler has called him brash to a fault and at first believed to be uncontrollable.

In sundry newspapers he was described as the problem child of Quebec junior hockey (1950) as well as a bellicose showboating rugged winger and colorful type and darling of the crowd and paradoxically, roundly despised by others because of his flair for showmanship (1950); speedy young forward (1951); brilliant rookie (1952); chippy operator (1952); aggressive, two-way performer (1955); also plucky (1961); a dependable playoff performer (1962); battle-scarred (1967); and once-proficient (1967). Toronto GM Punch Imlach called him a great competitor (1964) and sore-legged all-star (1966).

For his first Art Ross in 1957-58 he scored 36 goals and 84 points in 70 games. The following year he piled up 41 goals; his 96 points that years were the most an NHL player had ever accumulated in a season.

A brilliant goal from the Habs’ 1959 Cup-winning game against Chicago was described this way:

Instead of passing from the end boards, he sprinted out and jammed the puck past Hall.

Some wounds and infirmities:

He went to hospital in 1952 with badly bruised knees.

In 1958 his fractured hand impaired his stickhandling and shooting. Canadiens’ physiotherapist Bill Head said it was a small bone just under the thumb that was broken, and that it was injury often incurred by baseball players.

Irwin Spencer of the New York Rangers slashed him in 1961, fractured a bone in his foot.

In the summer of 1961 he had surgery on his left knee to remove cartilage. At training camp that September the knee was weak.

With the Leafs in 1964, he bruised the base of his spine hitting the boards backwards in New York, an injury he concealed for two weeks until he couldn’t skate.

A word often associated with his knees was gimpy. Back again in 1962, he was 31 with a limp and a question mark hovering just in front of him, in front and up a bit. He’d had knee surgery in the summer, the left knee again, this time the doctors removed a cyst. Moore hoisted the leg of his trousers for a reporter to study the aftermath of all the hospital work: three six-inch scars.

“The thing is that I have to work at this game,” he explained. “The knee will never be perfect and I have to do some things a little differently. I have to know how to twist and turn without straining it and to expect a little pain once in a while.”

At training camp in Verdun he had his best day on September 19 when he scored a picturesque goal and set up another by Lou Fontinato and (Pat Curran wrote in The Gazette) “was skating much like The Digger of old.”

“I should have had another goal but that Patate picked it off when I tried to flip the puck past him.”

Youths attacked him: youths. The Habs were in Detroit, April of 1952, in the finals. The Red Wings won the game, 3-0, to take a three-game lead, it was all over, except for the hallway scuffling. The Ottawa Citizen told the tale: a jostling group of youthful fans was waiting for the Canadiens outside their dressing room when

One youth laid into Moore with a body check. Moore shoved him and the band grabbed the Canadiens. But [Red Wing Leo] Reise and [Ted] Lindsay, passing by, grabbed two of the youths and ended the scuffle.

He couldn’t do it any more in 1963, his ailing legs wouldn’t let him. He was 33 a year later when Punch Imlach plucked him off waivers and brought him to Toronto (he also grabbed Terry Sawchuk). “When I draft players,” Imlach said, “I tell them to throw away the medical reports and birth certificates

“We have nothing to lose by taking a shot with Moore, we’ve had guys play with almost broken legs so I’m certainly not worried about a couple of sore knees.”

He played 38 games for the Leafs before he decided his knees really weren’t up to the work.

He did come back for one more season, in 1967-68, when the St. Louis Blues convinced him to give them a whirl. On a team that iced Glenn Hall, Doug Harvey, and Red Berenson, Moore only played 27 regular-season games, but he was instrumental in getting the Blues into the playoffs, and he was the team’s leading scorer (seven goals, 14 points) as they fought a way to the finals, where Montreal beat them in four games.

“They’re paying me well and when a guy likes the game as much as I do, it’s pretty hard to turn down something like this,” he said as the season got underway. “They’re not expecting the world from me. They want me to set my on pace and I don’t think I’ll disgrace anyone.”

“I mean, people don’t go out now strictly with the idea of knocking somebody down. In my day, guys would come off the bench with only one idea in mind: run the other guy into the boards or knock him off his skates.”