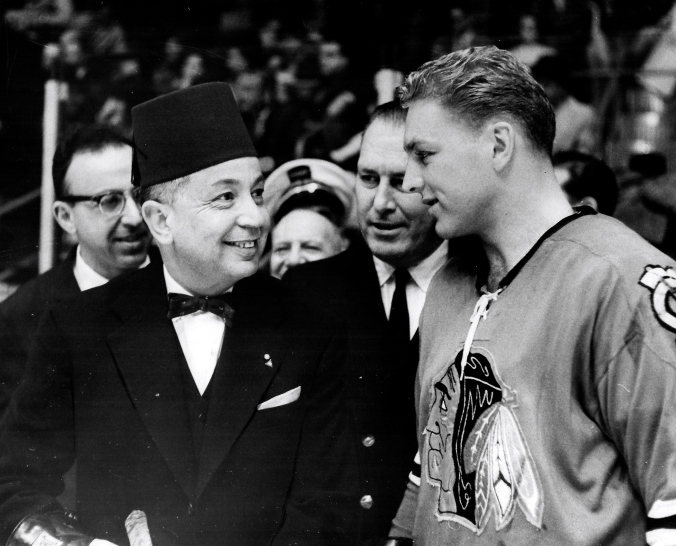 Jet Set: Chicago’s Bobby Hull greets the Pasha of Kenitra on-ice at the Stadium in January of 1962.

You don’t have to be too familiar with the northern Moroccan province of Kenitra to know that they don’t play a lot of hockey there. Even when there was a U.S. naval base and air field in the capital, also called Kenitra, I’m going to venture that it’s baseballs that were being struck locally more than pucks. U.S. servicemen were in the area starting in the 1940s and they stayed around until the early 1990s, but there were never more of them in situ than in the 1950s, when close to 10,000 personnel were Kenitra-based, more than anywhere else in the world that wasn’t the U.S. itself or Japan.

All of this comes by way of explaining how the Pasha of Kenitra found himself at a Chicago Black Hawks game in late 1962. Maybe Abdelhamid El Alaoui would have preferred to view the White Sox or the Cubs, but it was January when the 56-year-old governor, a cousin to Morocco’s King Hassan, visited Chicago, so hockey it was.

He was a guest in the U.S. of the Navy and the State Department. Before Chicago, he went to New York and Disneyland, both of which were said to impress him. Illinois showed him the Inland Steel Co., the Museum of Science and Industry, and the Great Lakes Naval Training Station. He met with Chicago’s Mayor Richard Daley, too.

At the Stadium, he saw Terry Sawchuk, Gordie Howe and the Detroit Red Wings take on a Hawks’ team featuring Glenn Hall, Stan Mikita, and Bobby Hull, not to mention the first penalty shot to be attempted on Chicago ice in 28 years.

Charles Bartlett of The Chicago Tribune was on hand to see both Pasha and penalty shot. The latter was the first to have been awarded since December 16, 1934, when Earl Robinson of Montreal’s old Maroons beat Lorne Chabot of the Black Hawks. This time, Detroit centreman Bruce MacGregor headed for goal and, in what Bartlett deemed “a good defensive play,” Chicago defenceman Dolly St. Laurent “overhauled the onrushing MacGregor and rassled him to the ice.”

Referee Eddie Powers called the penalty shot; MacGregor skated in alone from centre. Eighteen feet out, he fired a shot, hard and knee-high, which Hall was seen to kick away with his right pad. Not so, said the goaltender, later: hit the post.

Chicago won the game, 4-1, with goals from Hull, Mikita, and Chico Maki, who scored a pair. Norm Ullman scored for Detroit. As the Pasha, none of the reporters seems to have asked him for his impressions of the game. Chicago’s Daily News reported that “he wore Western clothes except his red fez” and “spoke in Arabic through an interpreter.” He said that the people of Kenitra “get along beautifully with the Americans in Morocco.” 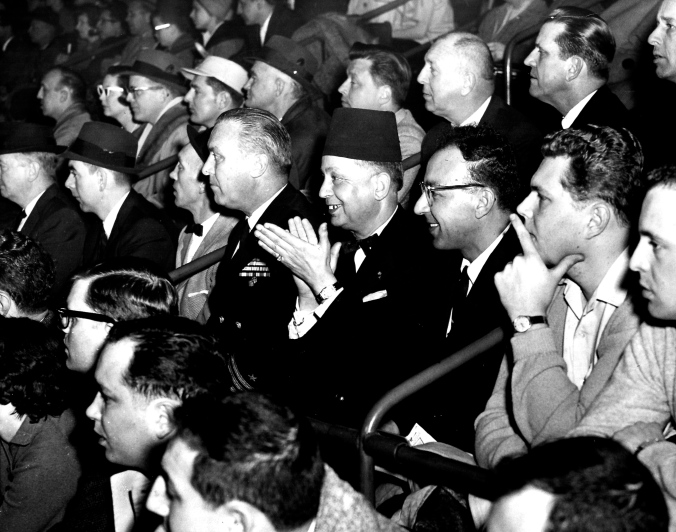