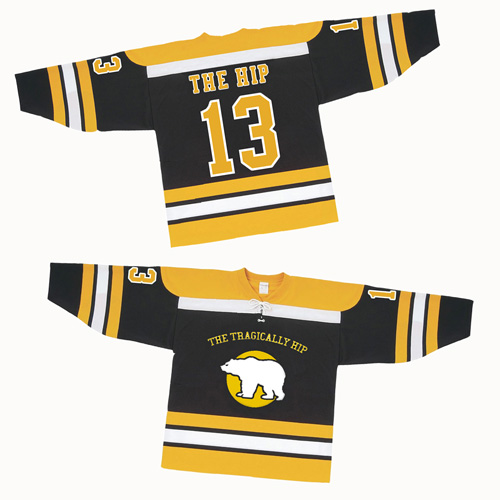 Hard news this week about Gord Downie, Kingston’s own poet, songwriter, singer, dancer, Great Canadian. The Tragically Hip woke the country up early Tuesday morning with the startling announcement of Downie’s terminal cancer; for the rest of the week, the country I inhabit tried to settle itself within the shock and the sorrow, even as we were celebrating the genius of the man, his words, his music.

Downie’s love of hockey is no secret. It’s there in the songs, “Fireworks” and “Fifty-Misssion Cap,” “The Lonely End of the Rink.” For the fullest account of Downie attachments to the game, you’re advised to read the fond chapter TSN’s Bob Mackenzie included in his 2014 book Hockey Confidential, which he reprinted (here) this week.

Downie has long been a devoted goaltender of park and pick-up rinks, though he told a Toronto magazine in 2010 that he’d pretty much hung up the blocker.

“I lived across from the rink, and I’d come out and the kids would go nuts, like the ice cream man had shown up. That winter, toward the end, I realized guys were coming in and firing it high on me, doing all kinds of stuff. There were little kids around, all ages. I was worried they’d blister one at me… I’m sort of retired altogether.”

In 2005, he auditioned for the CBC mini-series Canada Russia ’72, showing up at Fredericton’s Aitken Centre in vintage pads to bid for the part of Ken Dryden. A reporter who sought out number 29 for comment heard him say he’d be honoured to have Downie wear his mask.

“I like Gord,” Dryden said. “I love the Hip and he’s just a really interesting guy. The only thing I recall that might be a problem for him is that I know he’s a Boston Bruins fan.”

It’s true —before he lost out on the Dryden role to actor Gabriel Hogan, Downie even intimated that he’d be just as happy to play Canada’s third (non-playing) Summit Series goalie, Boston’s Eddie Johnston.

Downie talked about the roots of his love of Bruins in a spritely 2009 conversation with a friend, novelist Joseph Boyden. Maclean’s has resurrected it, this way. It’s a marvellous thing in its entirety, and includes this hockey-talking:

Q: Many of us know you as singer, a poet, and even an actor. But a championship hockey goalie?

A: When I was a kid, Bantam age, our team, Ernestown, went all the way to the provincial “B” championship. We had to beat four teams in four series to get there. The crowds were huge, the stakes brutal and crushing. I was the goalie. Teen hero or teen goat. It teaches you things.

A: I wish. He knows what to say to a goalie. And goalies are strange. You do want to play but there’s also a part of you that kinda hopes a compressor will blow or that there’ll be too much snow on the roof and part of it will cave in and they’ll have to cancel the game.

Q: You’re a big fan of the Boston Bruins. This could be considered a travesty, even treason with many Canadians.

A: I have loved them since the early ’70s. All of my siblings were big Bruins fans. It was a certain type who liked the Bruins. They were known as a “blue-collar” team. They seemed to me like an outlaw team. You were a bit of an outlaw if you liked the Bruins.

Q: Why not the Leafs?

A: My grandfather liked the Leafs. Because of him I always carried — and still do — a place in my heart for the Leafs — albeit a small place. I should mention, also, that Harry Sinden and his wife, Eleanor, are my godparents.

Q: The Harry Sinden, godlike Bruins head coach and coach of Team Canada in the famed 1972 Summit Series against the U.S.S.R.?

A: I didn’t like to make a big deal of it when I was a kid. But I was very proud of our connection and I still am. My brothers and me defended every move he made, and loved the Bruins fiercely, spiritually, as any number of our friends will painfully attest to.