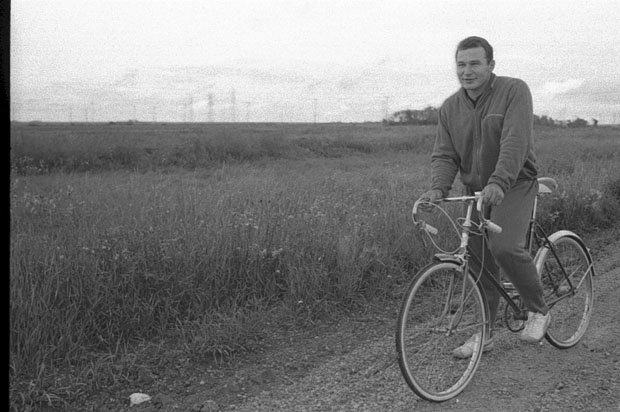 Ted Green wasn’t much for the pre-season. “I never liked exhibition games,” the long-serving Boston defenceman wrote (with Al Hirshberg’s help) in a 1971 memoir, High Stick, “because of the chances of getting hurt before the regular season started.” As for shaping himself up for the long campaign ahead, he took care of that on his own time in the summer — late in August of 1968, for example, above, just ahead of his ninth year on the Bruins’ blueline.

“I kept myself in condition during the off-season at my home in St. Boniface, just outside Winnipeg, Manitoba,” he wrote. “The only reason I cared about training at all after I made the club was to get into skating shape, which never took more than a few weeks.

It was a year later, September 21, 1969 in Ottawa, that Green got into a grievous stick fight with Wayne Maki during an exhibition game with the St. Louis Blues. When it was over, Green went to hospital with a life-threatening compound skull fracture. After three brain surgeries and a year’s gruelling recovery, Green spent the summer of 1970 facing the law and his hockey future. Ottawa Police had charged both players with assault causing bodily harm, though after Maki was tried and acquitted, Green’s charge was reduced to common assault, of which he, too, was cleared.

Training camp was in London, Ontario, that September. “I went,” Green wrote later, “not knowing if I could play hockey again or not.” He could: helmeted, now, he played another two seasons for the Bruins before jumping to the WHA, where he skated a further eight.