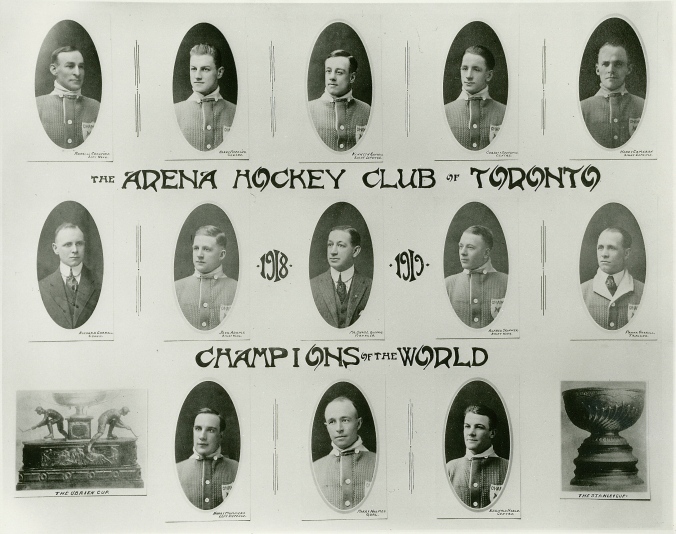 As the adjectives continue to flock to Auston Matthews in the wake of his four-goal debut for the Toronto Maple Leafs on Wednesday night, the rookie offered up one of his own. The writers called him elite and incredible, sizzling, his performance was magical, spectacular, unforgettable, and NHL-record and historic. Writing the headlines for this morning’s Toronto newspapers, editors contributed Auston-ishing and Marvellous Matthews and Matt Trick to the conversation. Matthews himself? “It’s pretty surreal,” he told reporters in his becalmed way after the game.

“Auston Matthews Sets Goal Record in NHL Debut” The Globe and Mail’s Thursday front page declared above the fold. The Toronto Star’s had him as becoming the “first player to score four goals in NHL debut.” As mentioned last night here and elsewhere, Matthews’ isn’t quite the all-time goal-scoringest debut in NHL history: Joe Malone and Harry Hyland scored five apiece on the NHL’s very first night back in December of 1917. That made it, eventually, into some of the reporting last night, and figures into the late paragraphs of most of the stories online and in print yesterday.

There were some who saw reason to qualify what Malone and Hyland achieved as Lisa Wallace of La Presse Canadienne did in this morning’s La Presse: “Les deux avaient précédemment évolué dans l’Association nationale de hockey.” Some observers, like Darren Millard from Sportsnet, were amused by the notion that anyone might bother to reach back 100 years to find an historical precedent for something that was happening here and now. An adjectival fix (modern-day) seemed to satisfy others, like The Arizona Republic, which celebrated a native son on the front of the morning edition: 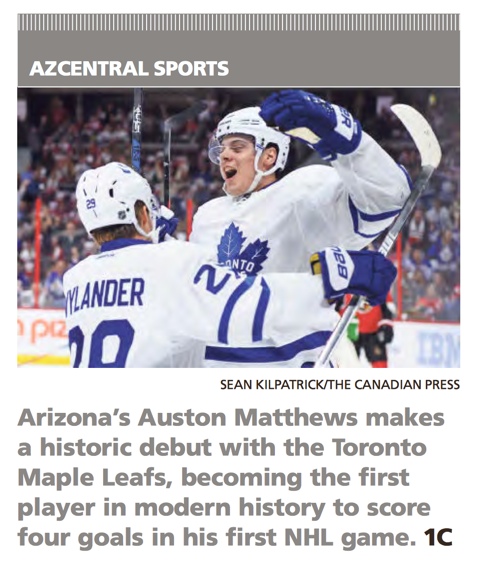 Historian Eric Zweig is the long-time managing editor of the NHL’s annual Official Guide and Record Book. He has a good explainer on where Matthews’ feat fits (or doesn’t quite) into the directory of deeds.

The pride of Collingwood, Ontario, he played on that first NHL night in 1917 as a dynamic member of Toronto’s original NHL team, the Toronto Hockey Club, a.k.a. the Torontos, Blueshirts, or just plain Blues. Looking back at newspaper accounts of Toronto’s opening game versus the Montreal Wanderers, I saw that Noble was down as having scored a Matthewsesque four of his team’s goals in their (Leafslike) 10-9 loss. I was quick to make Noble’s claim, which nobody else seemed to be advancing and wasn’t on the NHL books.

Upon further review, it looks like Noble didn’t score four. Or did, only to have credit for one of them rescinded. Or could have, maybe, but it was hard for witnesses to see. Unless it was the scorer’s fault — did he mess up? Whatever happened, Noble’s fourth goal did not pass into history or the NHL archives. (See UPDATE below.)

So let the record show that Noble scored a mere three goals on December 19, 1917. While we’re at it, also maybe can we concede that the record is generally more smudged that we’d like? Easy to fault bygone chroniclers who weren’t as attentive to detail as we might wish them to have been, to bewail the paucity of corroborating tweets and GIFs. That doesn’t change anything, though: the reports from Montreal are as vague as they were before we started carping. 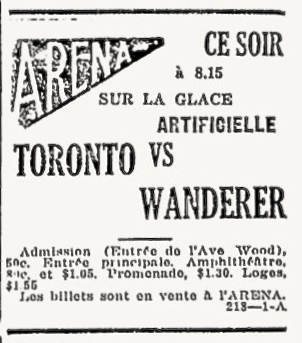 The accounts we have can’t agree on how many spectators were on hand at the Westmount Arena on the night. “A very small number” was as much as The Ottawa Journal could bring itself to divulge. “Barely 500,” La Patrie counted, while a wire report that appeared in The Toronto World and elsewhere had the crowd at “about 700.” Le Canada? “Hardly more than 1200 fans.”

When it came to the scoring, the local papers repeated the Toronto Daily Star summary in which Noble’s name was attached to Toronto’s first, sixth, seventh, and ninth goals. In its short game report, La Patrie identified 22-year-old Noble as “l’ex-Canadien” (he’d played the 1916-17 NHA season for the Habs). He was “active” and carried himself “like a veteran” — “he deserved a better fate.”

“By himself, he had four goals for Toronto.”

The Wanderers’ Art Ross was the star of the night, in Le Canada’s books, though he scored just a single goal. Noble got no special mention, but then nor did Montreal’s own five-goal hero Harry Hyland. He was knocked out at one point, according to The Ottawa Journal, when an errant puck “struck him a terrific smash fair in the eye.”

Like everybody else writing about the game, Le Canada noted Toronto’s dreadful goaltending. Sammy Hebert started the game, but after what the Journal rated a “mediocre” first period (he allowed five goals), in came Art Brooks. “Sammy Hebert couldn’t stop a flock of balloons,” someone at the game advised the Daily Star, “and Brooks wasn’t any better.”

Ross’ goal was “one of the prettiest of the evening,” testified The Ottawa Journal’s witness, failing to file specifics: “an individual effort in which he outguessed the Blue defence” was as much as he was willing to say.

The Journal’s summary is the only one I’ve seen that varies from the Noble-scored-four norm. It’s a complete muddle, missing one Toronto goal entirely and attributing another to someone called “Neville” when no-one of that name was lined up for either team — although the referee was Lieutenant Tom Melville. In this version, Reg Noble is down for just two goals.

To further confound its stats-minded readership, same day, same edition, the Journal ran a list of the NHL’s leading scorers that tallies ten for Torontonians.

Back in Toronto, the Daily Star was sowing some confusion of its own. A suggestion that Noble’s famous four goals might not last into posterity appears in a dissenting opinion in the December 20 Star two columns to the left of the game summary in which they’re reported.

“Just how good Cameron and Noble were at Montreal last night is indicated by the fact that they got three goals each,” writes the Star’s anonymous contradictor. “Charlie Queerie [sic] says that Dennenay [sic] got the other three, but the official summary credits Skinner with one.”

Whether or not he scored four that first night, Noble did turn in a stellar season for the eventual NHL and Stanley Cup champions from Toronto. Credited with just the three, he ended the regular season with 30 goals in 20 games, finishing third in goals and points in the league, behind Canadiens’ Joe Malone and Cy Denneny of Ottawa.

It wasn’t all smooth sailing: in February of 1918, Toronto manager Charlie Querrie fined Noble and teammate Harry Cameron $100 each for what the papers called “breaking training.” That could include anything, of course, from oversleeping to refusing to do push-ups to smuggling a bottle of gin onto the powerplay in the game against Canadiens. What we do know is that Noble’s fine was doubled when he continued to defy the boss.

There were injuries, too, notably at the end of the season, when Noble was reported lamed in the last game of the regular season when Ottawa’s Rusty Crawford kicked him with his skate — while, puzzlingly, Crawford was trying “to get” teammate Eddie Gerard.

Still, as the season wound down, The Ottawa Journal was picking Noble out of the crowd to praise. Not only was he big and fast and tricky on the stickhandle, he checked back hard, scored goals without being selfish, “and has a lot of hockey knowledge stored in his noodle.”

Noble has played beautiful hockey this winter and though fans hear and think more of Malone, Lalonde, Nighbor, and a couple of others, the blue-clad boy appears to have a little on them all as an around player. Reg Noble for ours, if we have asked [sic] to pick out the most effective player in the NHL today.

The modern-day Maple Leafs get set to announce, today, their list of the best 100 players in their history. Will Auston Matthews’ name be among them? I’m guessing that Reg Noble’s won’t be. Who remembers him? There’s always a chance, of course, that he’ll be back in the news as soon as tomorrow night, when Matthews makes his home debut against the Boston Bruins. Reg Noble’s came on another Saturday, December 22, 1917, when Toronto beat the Ottawa Senators 11-4. Don’t tell Matthews, but in his second game, Reg Noble scored four goals.

UPDATE, June, 2020: The NHL now  does acknowledge Noble’s opening-night foursome in its records, which you can see here. Not quite sure when the change was made, but there it is.