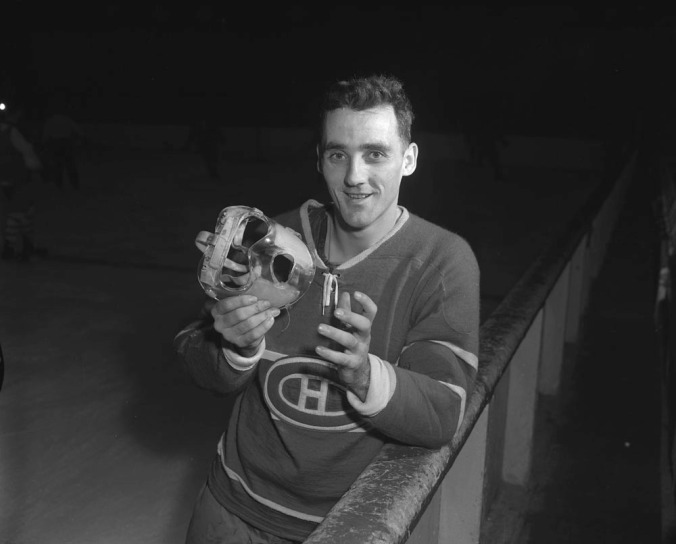 Mask + Man: Before he added his famous mask to his game equipment one night in 1959, Jacques Plante was protecting his face in practice. After having both cheekbones broken in training mishaps in 1954 and ’55, he first tried a welder’s mask donated by a fan. He later switched to the plexiglass apparatus he’s holding above, the creation of a St. Mary’s, Ontario, inventor by the name of Delbert Louch. “Louch’s New Head-Saver” had its shortcomings: it left a goaltender’s forehead vulnerable and tended, too, to fog over on the ice. Plante modified his, as shown above, by cutting out eye-holes. (Image: Library and Archives Canada)

You can guess, maybe, the species of shot that truly distressed Jacques Plante. “Oh brother, that damned slap shot!” he wrote, to the point, in 1971. “You have no idea what an effect the slap shot has had on goalies.” Heading into a game against Chicago, he said, knowing he was gong to facing Bobby Hull, his nerves would start their rattling two days before the teams hit the ice.

Plante was 41 by then, playing for the Toronto Maple Leafs — with another three seasons to go before he’d wrap up his 21-year professional career. He was wearing a mask by then, of course — had been for 11 years, ever since the night in 1959 when Andy Bathgate of the Rangers moved in on him in the early minutes of a game in New York.

You know the story. It was this week, 57 years ago, November 1. It wasn’t a slapped shot that did the damage and launched a Heritage Minute. No, Bathgate’s effort was a malign backhand. He told Plante biographer Todd Denault that he’d done it on purpose, vengefully — Plante had tripped him into the boards, he was bleeding, and mad. “I gave him a shot right on his cheek,” he said.

The puck struck Plante to the left of his nose. Dave Anderson: “He toppled face down on the milk-white ice at the right side of the net.” Red Fisher, covering the game for The Montreal Star, would describe Bathgate rushing in and lifting Plante’s head.

Plante stayed down for 15 seconds. He got up with a towel fixed his face, skated off under escort by Maurice Richard and Dickie Moore. A pair of Garden policemen helped him to the medical room. Rangers’ doctor Dr. Kazuo Yanagisawa sewed in seven stitches. After 20 minutes, Plante was ready to return. There are varying versions of the conversation that took place between coach and goaltender before Plante rejoined the game. In his biography Behind The Mask, Raymond Plante (no relation) has Plante lying on the medical table, seeing Blake, saying I want to play with my mask on. Blake: We’ll see, we’ll see.

Dave Anderson wrote a Plante feature for The Saturday Evening Post in 1960. As he tells it, Blake is the one to mention the mask, tell Plante he can put it on. Good, Plante told him, because I wouldn’t go back without it.

Todd Denault’s biography is Jacques Plante: The Man Who Changed the Face of Hockey (2010). He has a stricken Plante departing the medical room, heading back out to the ice (where — a superior detail — the New York fans sang “For He’s A Jolly Good Fellow”), then on the Canadiens’ dressing room where he had it out with his coach.

The mask was — well, you’ve seen it. Ghoulish is a word you often see in reports of that November night in ’59, post-Halloween. “We thought it was a joke,” Andy Bathgate recalled.

Plante had been using his modified Louch mask in practice, but it wasn’t something he wanted to try in a game. He’d been working with a salesman for Fiberglas Canada on designing a mask that was light and protective and didn’t compromise his vision. The version they came up with wasn’t ideal — the Fibreglas man himself thought it was too grotesque — but Plante tried it out in a couple of pre-season games.

Montreal coach Toe Blake wasn’t impressed. “My original objection was that I thought Jacques was losing sight of the puck when it was at his feet,” he later said. Blake’s private opinion, that Dave Anderson shared with readers of The Saturday Evening Post in 1960? The coach was said to fear that Plante was losing his nerve — succumbing to the dread goalie disease “rubberitis.”

Blake wasn’t complaining after the Ranger game. He looked very sharp wearing it against the Rangers,” was one of his quotes in the paper next day. Montreal won the game, 3-1. “I think he plays as good with the mask as without it,” Maurice Richard said.

Plante: “If it was a forehand shot, I’d be six feet under now.”

He said he’d put it on again it for the next game. Blake, meanwhile, was philosophical. “It’s the coming thing in the game,” he was saying. “The time will come when they’ll have an even better mask than Plante’s and it’ll be standard equipment for goalies.”

Asked whether he’d allow his goaltender to wear one, New York coach Phil Watson shrugged. “I wouldn’t object to it as long as he saves the goals.”

The goaltender in question wasn’t exactly on the same page. “I won’t wear one,” said Gump Worsley. “I actually don’t think it’s necessary, but if they make it a league rule, its use by a goalie should be optional.”

To mark the anniversary of the revolution that Plante began that night when he first wore his mask, is it worth pursuing three detours back into his singular biography? Maybe.

He was a painter and a reader and also in 1959 had a collection of 350 popular LPs that (Betty Lee testifies) he liked to listen to when pucks weren’t hurtling at his head. His favourite subjects when he turned his attention to his oils and his brushes? “Landscapes, seascapes, and signs on doors,” a 1963 profile reminds us. The feature writers loved to mention the books, to flag the extent of Plante’s wacky iconoclasm. Lee wrote of his preference for biographies: “Churchill, Napoleon, Eisenhower are his favourite subjects.” A 1970 profile provided this update: “Off the ice, Plante favors quiet evenings with a thick biography of Lenin or Marie Antoinette.” Here’s Raymond Plante plying the same tack regarding the goaltender’s time with Montreal:

His teammates viewed Jacques as a ‘different kind of guy.’ How many hockey players would sit knitting or reading a biography on the train instead of joining in the everlasting card games? There was only Jean Béliveau with whom Jacques could talk about books from time to time.

He ate five meals a day, slept 14 hours — or maybe 15. Winter nights when he wasn’t playing, he was in bed by eight. “Maybe I watch television for a while, maybe not,” he confessed to Dave Anderson, “but by ten I am always asleep.” Eight a.m. he was up. “In the afternoon he’ll put a stack of soft music on his hi-fi record player and take a two-hour nap.”

“To be a good goalkeeper,” he preached, “you must have your rest.”

Anderson’s 1960 accounting of Plante’s diet has him starting the day with cheese, toast, and coffee (“I hate eggs,” Plante tells him) followed by a lunch of ground steak, mashed potatoes, and ice cream. “Then comes a sandwich at four and a steak dinner at six-thirty. Before he goes to bed he has another snack.”

By 1970, he was rising at 7 a.m., breakfasting on corn flakes, grapefruit, cheese on toast, coffee with sugar and cream. Still hated eggs. Lunch: grilled chees, followed by a two-hour nap, “soothed by a stack of long-playing Doris Day or Duke Ellington records.”

Supper was steak, potatoes, salad, cookies, milk, V-8 juice. “After the game,” Alan Walker writes, “he will drive home to a bedtime snack of lasagna, large amounts of which he cooks in advance and freezes in meal-size portions.”

He knitted. Everybody knows that. “A master of the knitting needles,” Hockey Pictorial called him in 1959. “He can knit a tuque in less than a day and fine-looking cardigan in under a week.” Todd Denault maintains that he could conjure a pair of socks in a day — a tuque took a mere three and a half hours. He liked to wear one, woolen red, white, and blue, when he first played for Montreal, drove coach Dick Irvin crazy. “Where’s the sleigh ride?” he’s supposed to have taunted.

Raymond Plante narrates a showdown, in 1953, Irvin told him NHL rules prohibited tuques (a lie), Plante came back with Aurèle Joliat, he always wore a cap (good point, but that was, as the man said, a cap), then when Plante played his first games for the Canadiens his tuques went missing from the Habs’ dressing room.

Plante told Betty Lee in 1959 that oil painting had already superseded the crocheting. “I made my wife a three-quarter coat a few years back. It was the last thing I ever did.”

Not so, apparently. In 1970, playing for the Leafs, he told Alan Walker from The Canadian Magazine that nobody made an undershirt he approved of, so what choice did he have but to manufacture his own? Two days an undershirt took. “I use four-ply wool,” he said. “They must not be too warm.”