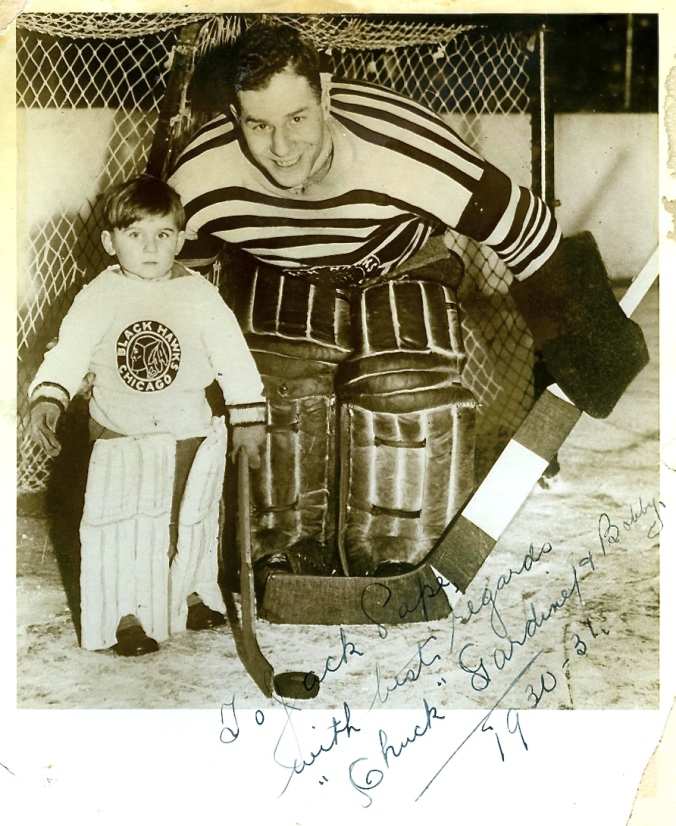 The Chicago Black Hawks got a new goaltender to start the 1927-28 season. The only problem, for him and his team? When he tried to enter the country from Canada, American immigration officials refused to let him in: the United States had already taken in its annual quota for hockey netminders.

Well, not quite. But something like that. Charlie Gardiner did sign on with Chicago in 1927, and did find himself refused entry into the U.S., not because of his profession but due to his Scottishness.

Sounds like a tale for these times. Here’s how it went:

The year Chicago debuted in the NHL, 1926-27, they got their goaling from man known as “Eagle Eye,” long considered one of the best in the puck-thwarting business: Hughie Lehman. At 41, he was the league’s oldest goaltender, though that didn’t seem to slow him down: he played all 44 regular-season games that inaugural Chicago season, as well as both playoff games before the Hawks bowed out to Boston.

The season over, Chicago’s coach, Pete Muldoon, handed in his resignation to Chicago’s energetic owner, Major Frederic McLaughlin. Muldoon’s  replacement, soon found, was Barney Stanley, erstwhile star of the Western Canadian Hockey League, and a man who also had a Stanley Cup championship to his name as a member of the 1915 Vancouver Millionaires.

Stanley’s previous job was as playing-coach of the Winnipeg Maroons of the American Hockey Association. That may have had something to do with the shopping Major McLaughlin did in the spring of 1927. In April, he paid $17,000 for Maroons’ stalwarts Cece Browne, Nick Wasnie, and Charlie Gardiner. The first two were left and right wingers, respectively, 31 and 25 years old. Gardiner, 22, addressed Chicago’s pressing need for a new goaltender.

“As it is well known,” The Winnipeg Tribune advised in reporting the transaction, “Hughie Lehman has had much trouble with his eyes. He is also anxious to retire from the game.” Not that the rookie would be left on his own: Lehman would stay with the team until Gardiner found, quote, his feet in the big time.

Along with the former Maroons, Chicago’s roster featured veteran captain Dick Irvin, speedy  ’When the fall came, Barney Stanley convened his players in WinnipegThis  towards the end of October for three weeks of pre-season training at the Amphitheatre. That didn’t go as smoothly as it might have: the team’s most dangerous scorer, Babe Dye, broke his leg and was forced to stay on in hospital when the team packed up to head south. November 15 they were due to open their season away to the Bruins, but they had a pair of exhibition games scheduled ahead of that, in Minnesota. They’d have just a day’s stop in Chicago before carrying on to Boston.

But before the Black Hawks could cross the border, the word from Washington came that Charlie Gardiner wouldn’t be admitted. I’m fairly certain that’s how it happened — from what I can glean from contemporary press reports, he wasn’t actually turned back at the frontier.

The trouble for the goaltender, as opposed to the rest of the Canadians on the Chicago roster? Though he’d grown up mostly in Winnipeg, he was born and spent his first seven years in Edinburgh, in Scotland. The Chicago Daily Tribune reported the hitch that had federal officials halting his migration:

Gardiner is a Scotchman, and the Scotch immigration quota has been exhausted for the next five years. Major Frederic McLaughlin, president of the Black Hawks, however, is trying to have Gardiner admitted under a six month permit. Gardiner has lived in Canada several years but he hasn’t become a citizen there.

While McLaughlin pursued the pertinent paperwork, the rest of the Black Hawks went on to Minneapolis to take on the AHA Millers. Tiny Thompson was the goaltender there, and he outduelled Hugh Lehman at the other end as the home team won by a score of 1-0.

Meanwhile, McLaughlin tried his case with Washington. His argument was that Gardiner should be admitted under the same conditions that applied to singers and (quote) other foreign entertainers under the provisions of the U.S. Contract Labor clause. Commissioner of Immigration Henry Hull took a look and it wasn’t long before a board of review determined that the goaltender had intended no fraud in trying to enter the U.S. The Black Hawks paid a $500 bond and Gardiner promised to renew his status at the end of the hockey season.

So he was in. No longer an alien, the goaltender who would soon enough be beloved in Chicago made his way to Duluth. His first NHL action on American ice came on Friday, November 11, 1927, when the Black Hawks met AHA defending champion Hornets in an exhibition. Gardiner’s NHL career would be outstanding, of course, though fleeting. He’d play just seven seasons, captaining the Black Hawks to their first Stanley Cup in 1934, before, weeks later, dying of a brain hemorrhage at the age of 29.

But on this night, in Duluth, he was just getting started. Dick Irvin scored a goal for Chicago in a game that ended in a 1-1 tie. Gardiner’s work was brilliant, said the man from the Minneapolis Star Tribune, and his covering deft.