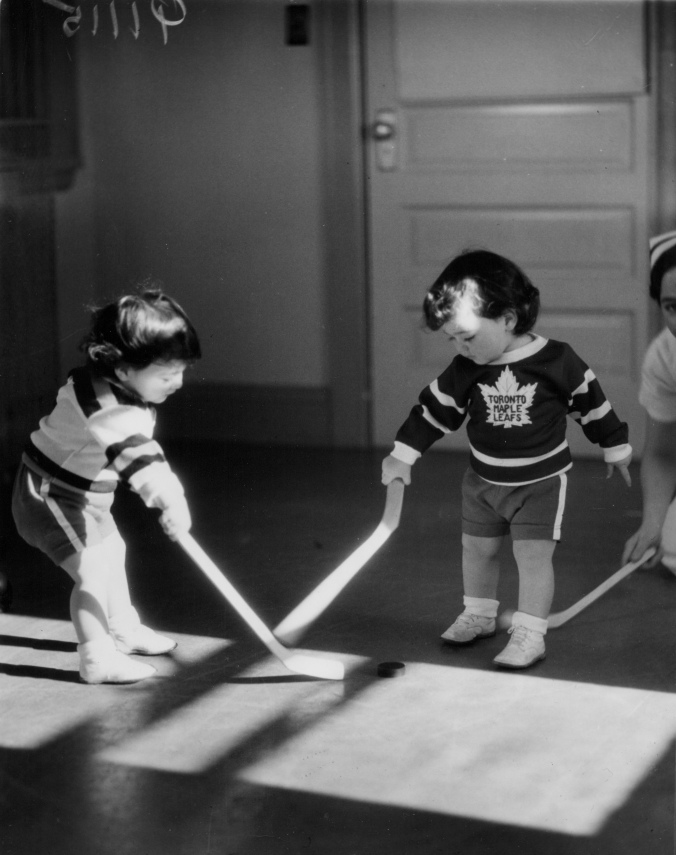 One On One: Two-year-old Annette Dionne, wearing Boston Bruins colours, faces her Maple Leaf’d sister Yvonne at their Corbeil, Ontario, nursery in 1936.

The story of the Dionne quintuplets is a long one, and sad enough. The latest chapter, which Ian Austen narrated in The New York Times over the weekend, continues to unfold tonight when the city council in North Bay, Ontario, votes on the future of the tiny log farmhouse where 24-year-old Elzire Dionne gave birth to her seventh, eighth, ninth, tenth, and eleventh children on May 28, 1934.

It was just another house, then, in the village of Corbeil, just south of North Bay. After the birth of Mrs. Dionne’s instantly famous quintuplets, the Ontario government made the children wards of the province, and promptly put them on public display. By 1936, the restaurant and parking lots of Quintland dwarfed the family home children, where the children lived in a new nursery near a fenced playground featuring shade trees, sand piles, and a swimming pool where (as The Toronto Daily Star enthused) “the babies may be watched without their knowledge.”

That summer, another newspaper reported, upwards of 6,000 visitors a day paid for the privilege of spying on them.

Later, the original house later became a museum. In 1960, it was moved to a site on the edge of North Bay. The city owns the house now, but wished it didn’t. The museum has been closed since 2015 and the land beneath it has been sold for development. Unwilling to maintain the house, or to pay to move it elsewhere in the city, North Bay was looking to sell it down the highway, to an agricultural society in Strong, Ontario, where it would feature in a new pioneer village.

The two surviving quintuplets, Annette and Cécile Dionne, are 82 now. They’ve written to North Bay councillors to suggest that they have a “moral obligation” to maintain the home as piece a Canadian history. With that and the attention that the feature in the weekend Times has focussed, the city is considering a new plan. That’s the one they’re voting on tonight. If passed, it would see North Bay retain ownership of the house and pay for its relocation to a downtown site near the Discovery North Bay Museum.

While we wait on word on which way the vote goes, a review of the quintuplets’ hockey careers is (obviously) in order. We know (for instance) that Yvonne, Annette, Cécile, Émilie, and Marie didn’t attend their first professional game until 1948, when they were 14.

The Chicago Black Hawks visited North Bay in October of that year to play an exhibition game against the Kansas City Pla-Mors of the United States Hockey League. The New York Times reported on that, too, which is to say it carried the Canadian Press dispatch of the proceedings, noting that the girls attended the game with their father, Oliva, along with several schoolmates, as guests of Hawks president Bill Tobin.

Chicago prevailed, 8-5, with Ralph Nattress and Gaye Stewart leading the way with two goals each. Emile Francis was in goal for the Hawks, with Al Rollins facing him from the Kansas City net.

Chicago coach Charlie Conacher and his Kansas counterpart, Reg Hamilton, presented the girls with sticks autographed by their players. As the night went on, North Bay mayor Ced Price treated the Dionnes to candied apples and popcorn.

“Though their large dark eyes flashed at times,” the CP’s nameless correspondent wrote, “the quints watched most of the game with little change in expression. They have not as yet become typical wild-eyed Canadian hockey fans.”

It’s not as if their guardians hadn’t tried. They’d been outfitted with hockey sweaters and mini-sticks for a photo op as far back as 1936, when they were just two. The Ottawa Evening Journal, among others, put them on the front page: 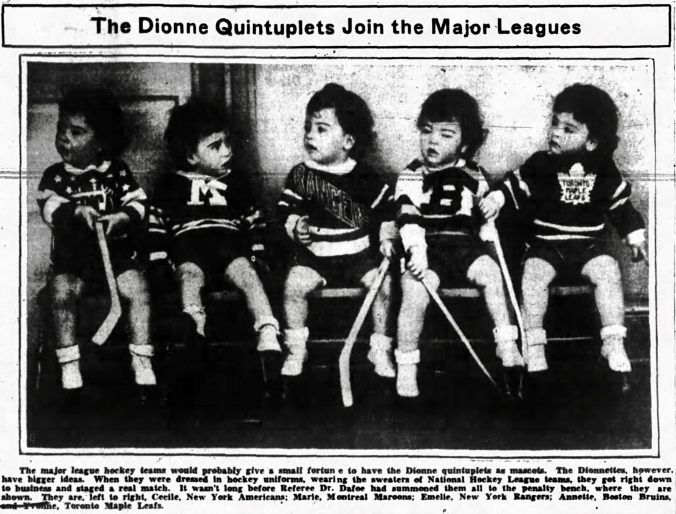