So Jacob Waddell is not going to jail — not this month, anyway, not for crimes, at least, related to withdrawing a catfish from his two pairs of underwear and hoisting it into the first game of the Stanley Cup finals.

You probably know all about this, but if not here’s a quick review: Waddell, a 36-year-old Tennessean, travelled from Nashville to Pittsburgh with the seafood he’d bought there and subsequently run over with his truck. As octopi are to Detroit’s Red Wings, catfish have more recently become to Nashville’s Predators. Having stowed his ammunition in his pants to smuggle it into PPG Paints Arena, Waddell retrieved it in a washroom and, with 16.40 on the second-period clock, let fly. This is what that looked like:

Security escorted Waddell from the building, where the Penguins would eventually prevail by a score of 5-3. What Waddell lost in seeing that outcome, he gained in a summons, issued by a Pittsburgh policeman named Bryan Sellers and citing three charges, as reported later that night on the departmental website: 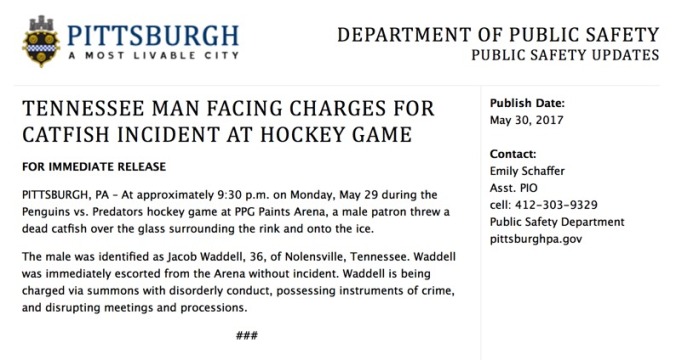 The news this afternoon is that all charges have been dropped. Allegheny County District Attorney Stephen Zappala says the accusations Waddell fail to meet the level of criminal charges. The Honorable Jeffrey A. Manning was the judge set to hear the case in Pennsylvania’s Court of Common Pleas of Allegheny County, where the docket reads, in part: 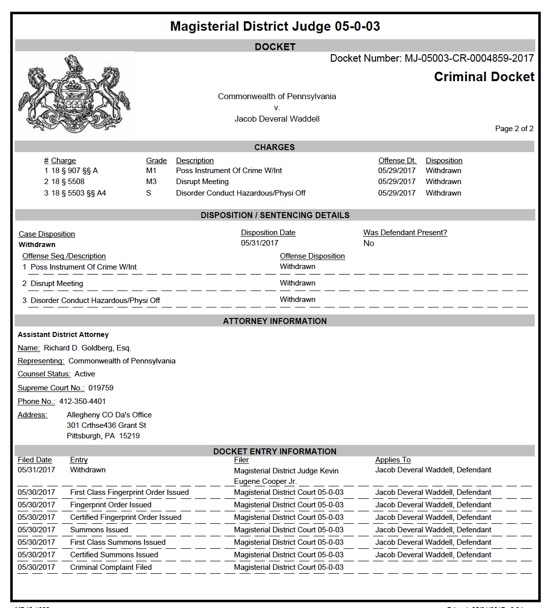