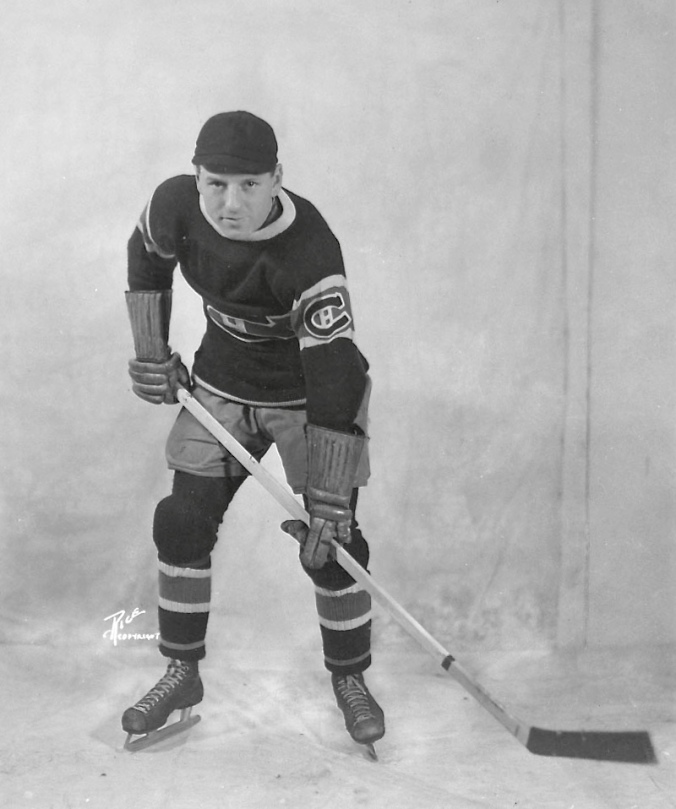 The anniversary last week of the death of Aurèle Joliat might elsewhere have triggered an impassioned rant highlighting the outrage and injustice associated with the little left winger’s absence from the list the NHL published earlier this year of its 100 best all-time players. Not here. That’s not to dispute that when Joliat died at 84 on June 2, 1986, hockey lost the greatest of its left wingers — official puckstruck.com policy, in fact, agrees that it did. The case for Joliat’s greatness, a solid one, is buttressed by the resumé the man whose name was often anglicized to Aurel built skating (mostly) alongside Howie Morenz: it includes the three Stanley Cups he helped Canadiens win, his Hart Trophy as league MVP in 1934, all those goals, his elevation to the Hockey Hall of Fame in 1947, & etcetera.

But we’re not going to get into that here. Today, we’ll focus instead on two other important matters relating to Joliat’s 16-year NHL career: his weight and his hat.

If once the Ottawa-born winger towered over Montreal Canadiens’ history, he was never what you’d call an imposing physical specimen. Check in with today’s standard reference sites — hockeyreference.com or nhl.com — and you’ll find Joliat listed as standing 5’7” and displacing 136 pounds. That’s small — slight, even. During his playing days, The Mighty Atom was a nickname he bore, and you’ll find many contemporary newspaper accounts in which he appears as Montreal’s “mite wingman.”

“Probably the tiniest player in the National League,” the Detroit Free Press tagged him in 1934, as ridiculous an insult to Roy Worters (5’3”/135 lbs.) as you’re going to see today, but never mind. Eddie Gerard played with Joliat in Ottawa before both men graduated to stardom in the NHL. “If he should walk into this room now,” he testified in 1932, “the last thing you’d take him for would be a hockey player, with his thin, pale face and frail body.”

“I don’t believe even with his hockey togs on he weighs 145 pounds.”

It’s not unusual to see the weights of hockey players bandied at length in newspaper accounts from the early decades of the 20th century. Makes sense — in an age before TV, with radio broadcasting still in its infancy, fans who weren’t seeing games live and in person relied on prose descriptions of play and players far more than we do today.

Still, even in that context, Joliat’s weight seems to have been oddly, ongoingly, in focus. Not only that: the way it fluctuated in the press seems to suggest that at least one prominent newspaper kept bathroom scales at the Montreal Forum in order to monitor his mass.

Watching Joliat play in the spring of 1924, PCHA President Frank Patrick sized him at 155 pounds. That’s as high a number as I’ve ever seen quoted. By 1929, Charles Grafton of Detroit’s Free Press had him down to 135 in a feature that bore this helpful subhead:

By 1930, he’d lost a bit more newspaper poundage: “weighs only 130 pounds,” reported The Philadelphia Inquirer. Joliat and his teammate Johnny Gagnon, Honolulu’s Star-Bulletin advised in 1931, “weigh only 136 and 139 pounds respectively.” Another year, another headline, this time from a 1932 edition of The Brooklyn Daily Eagle:

The Evening News, from Harrisburg, Pennsylvania, weighs in, 1935.

Joliat was 37 when he retired in the spring of 1938. As the hockey season neared that fall, he professed he didn’t know what was next for him. “My plans are indefinite,” he said as September struck, still holed up at his vacation camp in the Gatineau hills. “I will be in Montreal Monday, when I may decide what to do.”

He ran a grocery store, eventually, in Montreal’s west end, and thought about opening a night club (but didn’t). After a few years, he’d return to NHL ice as a linesman. Later still, he worked as a ticket agent at Ottawa’s train station.

In 1941, when he gave up the store, he announced a new plan: he was thinking of taking up as a ski instructor. He told a reporter that he’d lost eight pounds in just the previous month, and his reasoning was that the outdoor life at Mont Tremblant in the Laurentians might help to restore his health. He was down to 129 pounds. “If I kept losing weight like that,” he said, “in another year, there wouldn’t be anything of me left.”

“Colourful Canadien,” Montreal’s Gazette headlined him, the day after his death in 1986. His final numbers? “Five-foot-six and 135 pounds at his heaviest.” His stature, readers learned, had been an on-ice asset. “He used his small size to his advantage, stickhandling around large defencemen and tucking the puck between their legs.”

That was wrong, of course, and still is. A tuque. Joliat’s hat was in fact — well, take your pick of comtemporary descriptions, which range from “a black peaked-hat” and “his old baseball cap” to “a polo cap” and “the blue peaked cap that has become a landmark around the circuit” to “that tight-fitting piece of headgear with its sombre visor.”

There’s some suggestion that he wore it to cover up a bald-spot, though nothing conclusive: it may just have been habit. Rivals quickly learned how to knock Joliat off his game.

“The players of other teams made it a point to aim for that cap,” Harold Burr wrote in The Brooklyn Daily Eagle in 1932.

Punch Broadbent, now with the Canadian Flying Corps, reached perfection at the trick. All he had to do was skate close to Joliat, nudge upward with his elbow and the cap would fall to the ice.

It didn’t matter if Joliat had possession of the puck. He would always let it go, stoop down and replace his cap. But he has discovered a way this Winter to circumvent his tormenters. He doesn’t wear the cap any more.

This was big news across the NHL. “The enemy players stared when Aurel was seen without his black cap,” John Kieran wrote in The New York Times.

Jack Carveth of Detroit’s Free Press had a different explanation for Joliat’s stowing of the cap: it was all about curing a scoring slump.

I’m not so sure about that, though: Joliat scored Montreal’s only goal in the first game of the season that 1931 November with his hat in place. Canadiens then went to Toronto, where Joliat, now bareheaded, again scored the team’s lone goal. He counted three hatless assists in a 5-2 win over the Montreal Maroons, and scored against Boston in his team’s next game, too. I can’t say whether he’d put the cap back on by then or not, just that he did go back to it at some point. He replaced it with a helmet for a few games in 1937 after hurting his head in a fall, but otherwise the remaining years of his NHL career were hatted.

In February of 1934, he played his 500th game, and before the puck dropped to set Canadiens and Maroons going, there was a ceremony at centre Forum ice. NHL President Frank Calder was there, along with other dignitaries. Canadian Press:

Referee Mike Rodden of Toronto summoned Joliat with a wave of his hand, and the mighty atom, who is playing his 12th season with Canadiens, pulled his black cap over his eyes and skated over to receive a beautiful loving cup presented by his teammates, and a handsome chest of silver and a golf bag, tributes of his many friends and admirers among the fans.