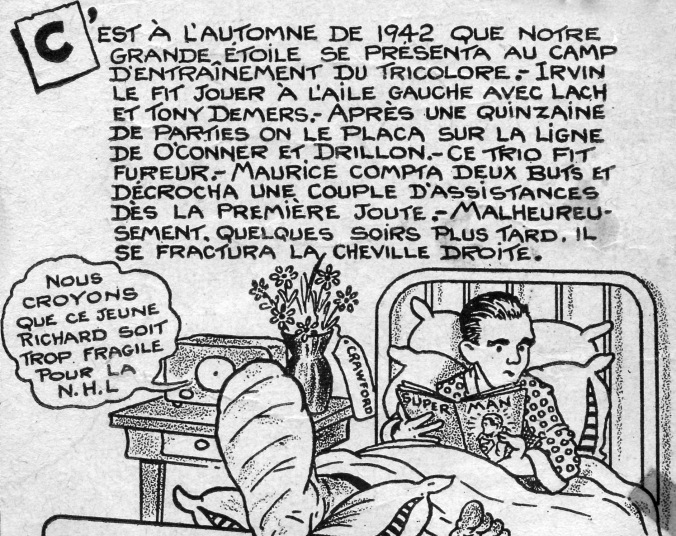 This was the second ankle-break of Maurice Richard’s fledgling career: in 1940, as a 19-year-old, he lower-body-injured himself playing in a game for Montreal’s Quebec Senior league farm team. He returned from that in 1941 … only to suffer a wrist fracture. He was sufficiently mended in 1942 to make the big-league Canadiens before he broke himself again. Richard himself got the timing of this 1942 incident slightly wrong: it happened during Montreal’s late-December game home to the Boston Bruins rather than in an away game earlier in the month, as he told it in the 1971 autobiography he wrote with Stan Fischler’s help.

At the time, a Boston reporter described the scene this way:

Maurice Richard was knocked from the game when elbowed by Johnny Crawford and had to be carried from the ice. There was no penalty …

Here’s Richard’s Fischlerized memory, picking up as he headed in Boston territory with the puck on his stick:

The next thing I knew, big Johnny Crawford, the Bruins’ defenceman who always wore a helmet, was looming directly in front of me. He smashed me with a terrific but fair body check and fell on top of me on the ice. As I fell, my leg twisted under my body and my ankle turned in the process.

Once again I heard the deathly crack and I felt immediately that my ankle must be broken. As they carried me off the ice, I said to myself, “Maurice, when will these injuries ever end?”

The awful pattern was virtually the same as it had been the year before, and the year before that! I was out of action for the entire season and missed the Stanley Cup playoffs, too.

Roch Carrier’s version of events is, by no surprise, much the more vivid. From Our Life With The Rocket (2001):

The puck is swept into Canadiens territory. Maurice grabs it. He’s out of breath. For a moment, he takes shelter behind the net. With his black gaze he analyzes the positions of his opponents and teammates, then lowers his head like a bull about to charge. With the first thrust of his skates the crowd is on its feet. It follows him, watches him move around obstacles, smash them. The fans begin to applaud the inevitable goal.

He still has to outsmart Jack Crawford, a defenceman with shoulders “as wide as that.” He’s wearing his famous leather helmet. Here comes Maurice. The defenceman is getting closer, massive as a tank. The crowd holds its breath. Collision! The thud as two bodies collide. Maurice falls to the ice. And the heavy Crawford comes crashing down on him. Maurice lands on his own bent leg. When Crawford collapses on him he hears the familiar sound of breaking bone: his ankle. He grimaces. This young French Canadian will never be another Howie Morenz.

Carrier goes on to describe the dismay with which Montreal management considered this latest setback. Coach Dick Irvin and GM Tommy Gorman offered their fragile winger to both Detroit and the New York Rangers. “The future is uncertain,” Carrier writes. “He wants to play hockey, but it seems that hockey is rejecting him just as the sea in the Gaspé rejects flotsam, as his mother used to say. Maybe his body wasn’t built for this sport.”