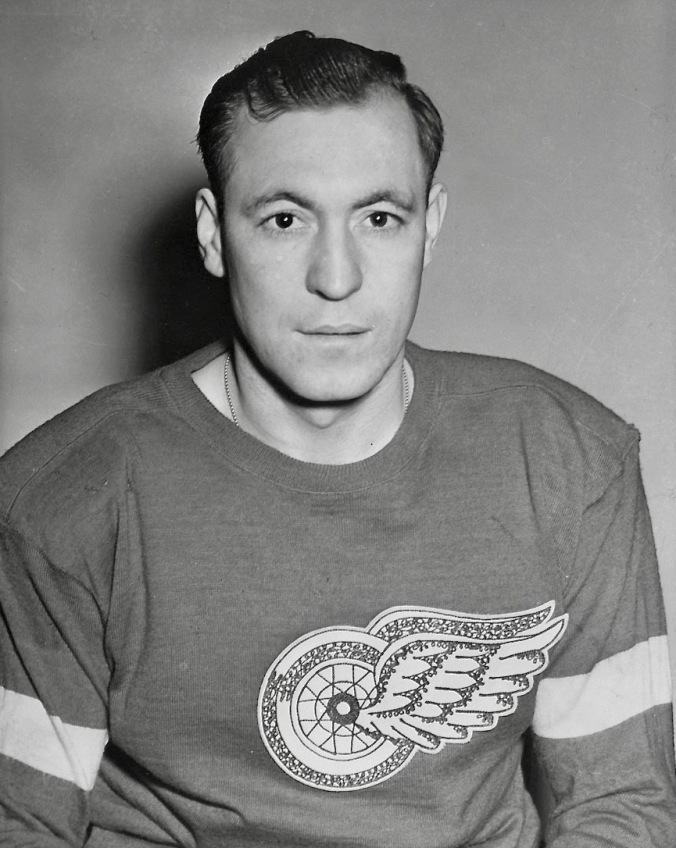 Born on this day in 1914 in St. Boniface, Manitoba, Modere Bruneteau played 11 seasons in the NHL, none of them for anybody other than the Detroit Red Wings. Mud is what they called him, everybody did, always, for all his right-winging years.

He made his mark early on. In the spring of 1936, when he was 21, Detroit called him up from the Olympics of the International League for the end of the regular season. In the opening game of the playoffs, the Red Wings battled Montreal’s Maroons through five overtimes and into a sixth at the Forum with neither goaltender, Detroit’s Normie Smith nor Montreal’s Lorne Chabot, conceding a goal. From (as the Detroit Free Press would report) “8.30 o’clock in the evening until 2.25 o’clock in the morning,” the two teams played on until, after 116 minutes and 30 seconds of extra time, Bruneteau took a pass from Hec Kilrea and fired the third goal of his young career past Chabot.

It’s still the longest game in the league’s history and lucrative, too, for the Wings. Doesn’t matter, I guess, whether they were Wings’ faithful or just happy to be going home: jubilant fans stuffed dollar bills into Bruneteau’s equipment as he left the ice in Montreal. He moved slowly enough that when the time came to divvy up the cash, he paid out $22 to each member of the Red Wings, including the trainer and the kid who lined up the sticks. A notoriously generous Red Wing fan stepped up, too, adding a further $50 to Bruneteau’s wallet.

That was early Wednesday morning. Later that afternoon, Lorne Chabot stopped in to the Windsor Hotel, where the Red Wings’ were encamped. In the Forum aftermath, fans had asked Chabot for the puck that had gone by him, and come morning he’d received a telegram from Winnipeg offering $50 for it. He’d turned them all down. Bruneteau wasn’t at the hotel, but Chabot found Detroit GM Jack Adams.

“Hell, Jack,” he’s supposed to have said. “Do you suppose that Mud would like the puck that beat me last night?”

Bruneteau’s on the record, too: when Adams handed him the puck, he’s said to have turned it over and over in his hands. “Gee whiz, gee whiz, that’s swell.”

The Red Wings played another six games that spring. The last one, a 3-2 win over the Toronto Maple Leafs, won them Stanley Cup. It was the first of two that Bruneteau would get his name on. He died in 1982 at the age of 67.