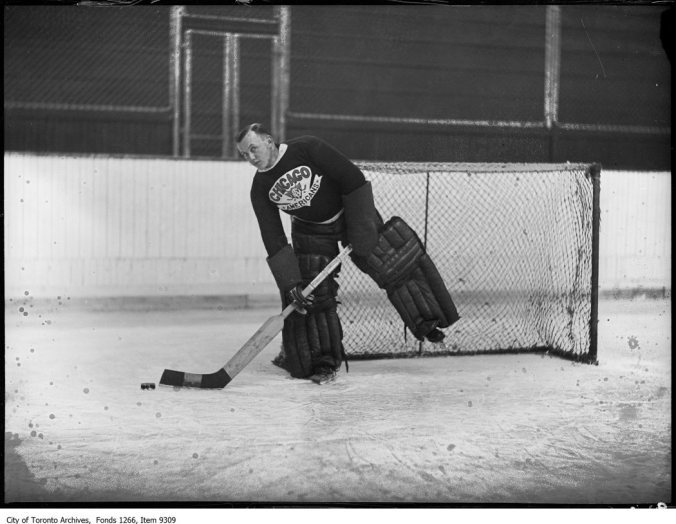 Left on the outside looking in when the National Hockey League formed in November of 1917, Toronto sportsman and impresario Eddie Livingstone would resurface in 1926 as the owner of the minor-league American Hockey Association’s short-lived Chicago Cardinals. It didn’t end any better, this time, for Livingstone. He was and always would be a pariah so far as the NHL was concerned, and any league associated with him was, President Frank Calder declared, an outlaw outfit. Livingstone would be forced to sell the team before the season was over; later, he’d sue the AHA, NHL, and Chicago owner Major Frederic McLaughlin, charging that they’d conspired to wreck his business.

Before any of that, back in the quiet of Toronto’s Mutual Street Arena, Livingstone’s upstarts gathered under coach Nip Dwan to gear up for their first and only season. This was November of ’26; pictured, that’s goaltender Winston (a.k.a. Bud) Fisher above and, below, (possibly) Ralph Taylor. As his sweater shows, the team had a brief non-avian identity. That would have been another irritant to the NHL, given that they already their own Americans playing in New York. The line-up featured a passel of future NHLers in Taylor, Cy Wentworth, Gordie Brydson, Teddy Graham, along with the man who’d take over the nets from Fisher, midway through the season, Alfie Moore.