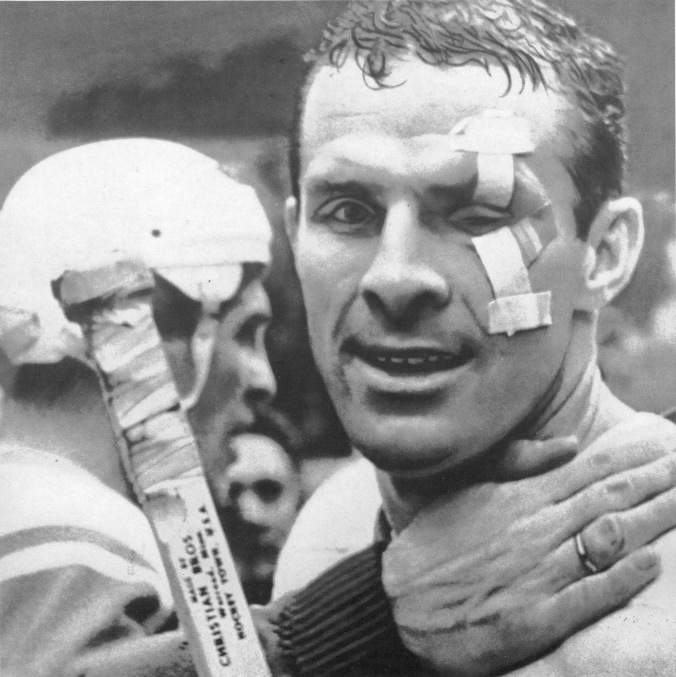 Aftermath: After winning three Stanley Cups with the Toronto Maple Leafs, defenceman Carl Brewer joined Canada’s national team in 1966. Against the Soviets in March of 1967, he took a stick to the eye for his troubles.

A live look into Canada’s quarter-final match-up with Russia at the IIHF’s World Championships shows the Canadians leading 1-0 at the end of the first period in Copenhagen, Denmark. In March of 1967, in Vienna, the score was the very same at the end of the opening frame, as Jackie McLeod’s Canadians went ahead of the Soviet Union on a Fran Huck goal in that edition of the tournament. It was a round-robin affair in those years, and this meeting of undefeated teams looked like it would decide the title. Canada had a tie to go with their five wins to date, while the Soviets had won all their games. They had dispatched Sweden by a score of 9-1, whereafter Swedish coach Arne Stromberg held Anatoli Tarasov’s group to be “the greatest team in the history of hockey, amateur or professional.”

The Soviets tied the game in the second period in ’67, with Anatoli Firsov lofting the puck high in the air from the Canadian blueline, whereupon goaltender Seth Martin lost sight of it as it dropped over his shoulder into the net. The Soviets scored again in the third, when Martin couldn’t control the rebound of a shot from Boris Mayorov, leaving Vyacheslav Starshinov to score the winner and secure the championship for the Soviets.

The Canadians were upset. “You know,” coach McLeod said afterwards, “it’s a great disappointment to lose after coming all this way, particularly when the winning goal was offside.”

Canadian defenceman Carl Brewer left the game when he took a stick to the eye shortly after the Soviets tied the score in the second. He did return for the third once trainer Bill Bozak had succeeded in taping the eye open.