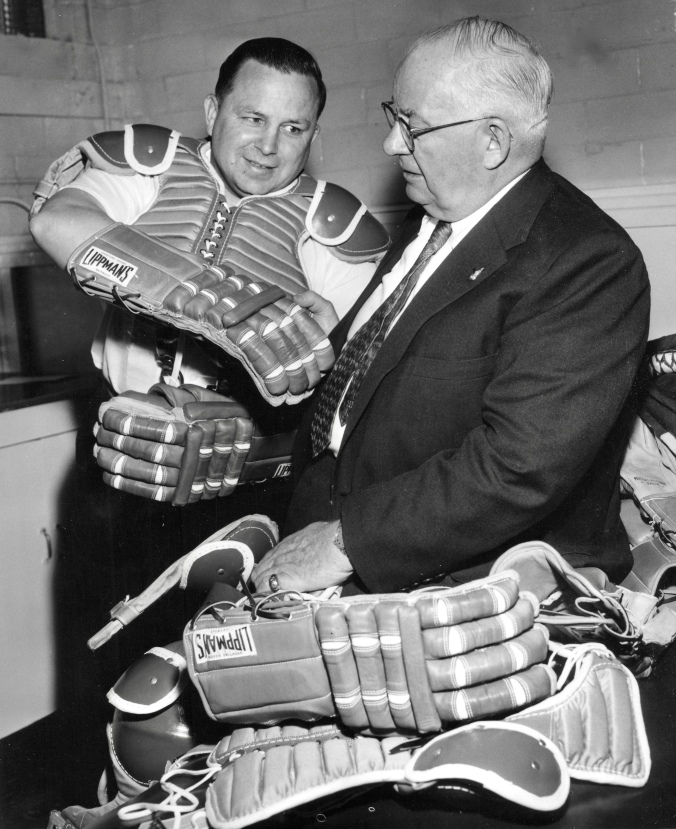 Detroit Red Wings coach Jimmy Skinner (right) gears up in the fall of 1957 with his boss, manager Jack Adams. A son of Selkirk, Manitoba, Skinner succeeded Tommy Ivan on the Wings’ bench in 1954, guiding the team to a second consecutive Stanley Cup championship in the spring of ’55. The summer of 1957 was a tumultuous one in Detroit. In July, Ted Lindsay departed the team, traded to Chicago after 13 seasons and 700 points for the crime of heading up the NHL’s incipient player’s association. Lindsay had said he’d rather retire than leave Detroit, but he’d finally agreed to the trade. At a press conference, Lindsay described “the personal resentment of the Detroit general manager toward me.” Adams denied that there was any feud: he said that shipping out 31-year-old Lindsay, the fourth highest goalscorer in NHL history, and All-Star goaltender Glenn Hall, 25, for four players and cash was all about renewing the Red Wings. With Terry Sawchuk back in the net that year, Detroit did end up in third place in the final NHL standings, though they fell to the unstoppable Montreal Canadiens in the opening round of the playoffs. Skinner was gone by then, having resigned as coach in January on a doctor’s advice about the migraines he couldn’t quell. Sid Abel was the man who replaced him, and he kept the job for the next ten years. His old linemate Ted Lindsay would return to Detroit for a final season in 1964-65 during that time. As for Stanley Cups, Abel’s Wings came close, losing in the Finals four times during his tenure. The team would go without a championship until 1997, with Scotty Bowman in command.