Head Leaf honcho Conn Smythe liked the look of the young left winger he was watching at Toronto’s training camp in September of 1949. Eighteen-year-old Danny Lewicki was fast, impossible to hit, a great stickhandler. “He looks to me,” the Leafs’ managing director said, “more like Aurèle Joliat than anybody I’ve ever seen.”

Born in what was then Fort William, Lewicki died in Toronto on Monday. He was 87. His NHL career, which spanned nine seasons, included stints with the Leafs, the New York Rangers, and Chicago’s Black Hawks. There’s memorial news of that here and here, though not all of it entirely accurate. The assertion that Lewicki was the last surviving member of the Toronto team that won the 1951 Stanley Cup will be news to 95-year-old Howie Meeker. (Update, September 26: CBC.ca has amended its story to acknowledge Meeker’s survival.)

Working on a training-camp line, in 1949, with another young junior star, George Armstrong, Lewicki had Smythe thinking of some great old Leafs, too. “They’re the best pair I’ve seen together since Charlie Conacher and Harvey Jackson,” he said. 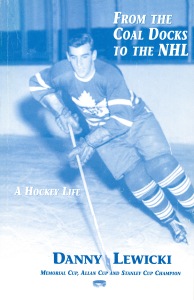 All of which boded well for the here-and-now Leafs, but for one small catch: Lewicki had no interest in playing for the Leafs. He had, it’s true, signed a contract as a 16-year-old indenturing himself to the team, but as he wrote in his 2006 autobiography, From The Coal Docks To The NHL, Lewicki felt he’d been duped. Rather than report to the Toronto’s Junior-A Marlboros as the Leafs wanted, Lewicki preferred to return to the team in Stratford where he’d played previously. “I don’t like Toronto,” he told reporters. “It’s too big.”

Smythe stood fast: Lewicki could either play in Toronto or he could play nowhere at all. He eventually did join the Marlboros in time to help them win the 1950 Allan Cup.

Graduating to the Leafs the following year, he skated on a line with Joe Klukay and centre Max Bentley. Bentley told him that it was the second-best line he ever played on, next to the so-called Pony Line on which Bentley had previously prospered in Chicago alongside brother Doug and Bill Mosienko. Lewicki finished third in the voting that year for the Calder Trophy for best newcomer, behind Detroit’s Terry Sawchuk and teammate Al Rollins. And then there was, too, of that Stanley Cup the Leafs won in the spring of ’51, beating Montreal in five games. Not a bad way to start an NHL career in the city he’d done his best to shun.

No Go: As this (slightly gleeful?) headline from Winnipeg recalls, Lewicki’s dispute with the Leafs was national news in September of 1949.