Standing Tall: Lorne Chabot in New York Ranger garb, which means before a trade took him to Toronto in 1928 — and before he started assaulting goal judges.

When last we visited with him, Lorne Chabot, goaltender extraordinaire for the 1935 Chicago Black Hawks, was assaulting goal judges and getting sued for it. Turns out there’s more to the story than originally advertised.

In February of 1932, when he was keeping the goal for the Toronto Maple Leafs in a game in Detroit, Chabot felt that a puck shot by Herbie Lewis of the local Falcons hadn’t passed him and ended up in the net, despite what goal judge Duke Kennedy said. The Leafs’ outraged manager Conn Smythe lobbied successfully to have Kennedy ousted from his post, though the goal was not rescinded.

In taking issue with Kennedy’s finding, which helped Detroit win the game 2-1, Chabot was alleged to have punched the goal judge, (1) loosening a tooth and (2) dislodging a filling. Kennedy filed a complaint with NHL President Frank Calder, as did Smythe. Calder found for the goal judge, suspending Chabot for the Leafs’ next game. Toronto called up Benny Grant from Syracuse to stand in, which he did in style, shutting out the Montreal Maroons 6-0. Smythe’s consolation, such as it was: Calder promised that Duke Kennedy wouldn’t, in future, work any more games in Detroit that involved Toronto.

The story from 1935 went like this: Chicago was in New York playing the Rangers one January’s eve at Madison Square Garden. The game ended 3-3. The Rangers actually scored four goals on the night, but just before Frank Boucher put the puck in the net in the first period his teammate Earl Seibert slid into the Chicago net with (per New York’s Daily News) “three Hawks piled on his person.” Goal judge Dick Williams triggered the red light — only to have referee Eusebe Daigneault overrule him.

“Seibert’s presence in the net, however involuntary, outlawed the tally,” explained The Daily News.

Score one for goaltenders, if nought for the Rangers. And yet despite the goal’s having been annulled, Lorne Chabot was still irate to the point of taking the fight, once again, to the goal judge.

Dick Williams was his name this time. Joseph Nichols of The New York Times thought nothing of the incident, or at least not enough to include it in his dispatch from the Garden. Same went for the Associated Press report that found its way into the pages of Toronto’s Globe.

The Chicago Tribune described the melee surrounding the disallowed goal like this:

Chabot resented the argument which followed so much that he skated around the cage and jabbed his stick through it at Goal Umpire Dick Williams.

Leave it to Harold Parrott from The Brooklyn Daily Eagle to file comprehensive coverage of the entire proceedings. By his account, the puck bounced out of the net after Boucher put it in, whereupon referee Daigneault scooped it up and carried it with him on his visit to Williams. Parrott:

Chabot skated in, too, jabbing the wicked butt end of his stick through the wire mesh to raise two gashes on the goal judge’s face, and loosen two teeth.

Colonel John Hammond, president of the Rangers, was quick to fire off a letter to Frank Calder. Why hadn’t Daigneault allowed Boucher’s goal when the goal judge indicated it was in? As for Chabot, why wasn’t he ejected from the game? Colonel Hammond wanted to know.

Replying to the latter question, Daigneault said that he hadn’t seen the attack on Williams. Rangers’ coach Lester Patrick had an answer for that. “It’s not necessary to see the blow when Williams’ nose and cut lip drip blood. Do you think those injuries grew there?”

Not according to The Daily News, which had salient details to add:

Skating behind the net, [Chabot] signaled Williams to draw close to the wire fencing the rink. Williams, apparently expecting a whispered confidence, placed his face to the wire, whereat Chabot jabbed him cruelly with his stick. Williams suffered a split lip and a bloodied nose and required the attentions of a doctor.

Calder doesn’t seem to have acted on Hammond’s protest; in time, Williams did (though maybe not). The following week is when word got out that goal judge was pursuing legal remedies. It wasn’t exactly explicit: the press reported that his suit for $10,000 in damages was “underway.” His claim seemed to be against the Hawks rather than Chabot himself. Poked was the operative verb that Montreal’s Gazette (among others) employed to describe the attack; regarding Williams’ injuries, there was this:

Later Williams was treated for slight facial contusions. He charges, however, that he subsequently discovered the inside of his mouth was seriously injured and teeth were loosened. He added that he hasn’t been able to eat since.

There was news, next, that Chabot had apologized; Williams, nevertheless, was said to be pressing his suit. 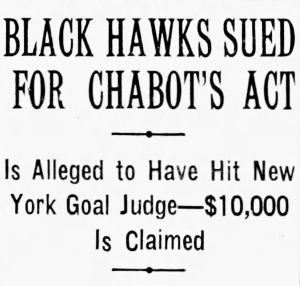 Except that … he wasn’t. Never had been, Williams declared in early February. “It’s a lot of hooey,” the goal judge protested, and I quote. “Imagine a league official suing a club member. That sock of Chabot’s did hurt, though.”

That’s almost that, but for this: in 1951, columnist Jimmy Powers from The Daily Newsgot Williams shooting the breeze about what happened that night in ’36. Williams was still working at the Garden, flashing the goal-lights when he thought he spied a goal. He was, by then, in his 25thyear on the job at the Garden. The job, mark you, was unpaid — Williams flashed his light and took whatever abuse came his way entirely as a volunteer. The Chabot incident? Oh, he remembered it well — if not, maybe, entirely the way it actually happened. For one thing, his chronology seems to have warped slightly over time.

Sixteen years later, Williams told Powers that Chabot had loosened four teeth rather than the original two. Also: Chabot was a pal of his, presumably dating back to the goaltender’s early NHL years as a Ranger. Williams’ explanation of what went down that night started in the first period:

“Chabot’s feelings were ruffled when the goal judge at the other end called one [goal] against him.

“In the second period Chabot made a beautiful stop but he caught the puck with his gloved hand inside the cage. I kept flashing the light. Chabot blew his top. He thought he caught the rubber outside the cage and he thought I was the same judge who called the first goal against him. He forgot he had changed goals. He charged back and rammed the butt end of his stick into my face.

“Chabot and I were really good friends. When he discovered his error, he pleaded with me to forgive him. Today we have glass partitions instead of the old-type chicken-wire.”