So as previously discussed, Jack Crawford, Boston defenceman of yore, was bald — “very, very,” according to Stan Fischler — and that’s why he wore a helmet. There’s lots in the way of anecdote to back all this up in the hockey books, if you get around to consulting them. Longtime Beantown broadcaster Fred Cusick mentions it in his 2006 memoir, Voice of the Bruins, for instance: Crawford wore the helmet “for cosmetic reasons,” he writes, “having lost his hair as a young man.” Turns out Ultimate Hockey (1999) quotes Crawford himself (no source offered) on the origin story: “When I played football as a teenager for St. Mike’s, the paint would peel off inside of my helmet and the doctors say that some chemical in the paint triggered the skin infection that caused all of my hair to fall out over the years.”

It is true that in most of the photographs you’ll find — the ones I’ve seen, anyway — Crawford has his helmet firmly in place. Also that — as in this one, from the Hockey Hall of Fame’s archive, or this one — from what you can discern of what’s beneath the headpiece, his hair looks decidedly scant. But then (also in the Hall), there’s this photo showing quite a coif. 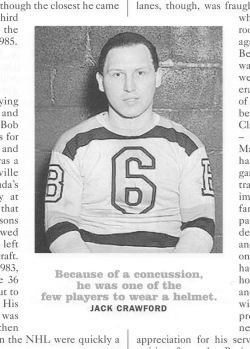 It’s the one you’ll see reproduced, as it happens in Andrew Podnieks’ voluminous historical ledger Players (2003). Podnieks, who’s typically very detailed in his biographical sketches, makes no mention in Crawford’s entry of any hair loss — the defenceman wore his helmet, he maintains, because he’d suffered a concussion early on in his career. Again, there’s no source provided for this.

To yesterday’s question of whether Crawford was bald but then grew back his hair; acquired a toupée; and/or had his photograph touched up — well, I don’t really have any definitive answer on that. If only to further/muddle the mystery, I can offer up for examination the photograph that tops the post. There’s no date on it, but given the players lined up, it would have to have been taken between 1940 and 1942. That’s Crawford on the far left, wearing number 6 and what looks to be as healthy a head of hair as Dit Clapper’s impressive do alongside him. Clapper’s, we know, is authentic, and Crawford’s (can we agree?) looks genuine enough. Could it be artful? I can’t really decide. Zooming in, below, you can see that an editorial hand seems to have darkened the horizon of Clapper’s hairline to distinguish it from the background. In Crawford’s case, I go back and forth. If someone did go to the trouble of painting it in — well, then, all I can say is bravo. 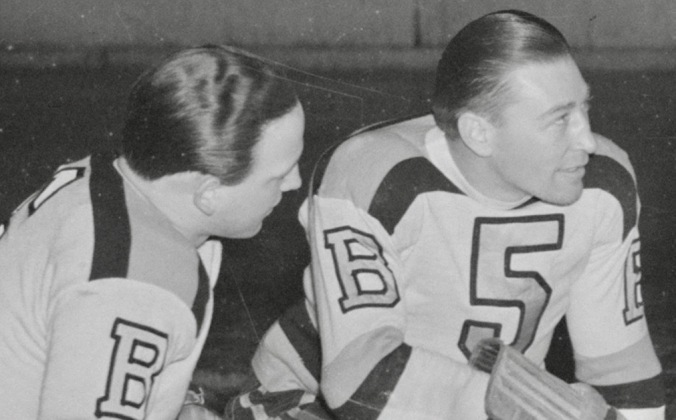