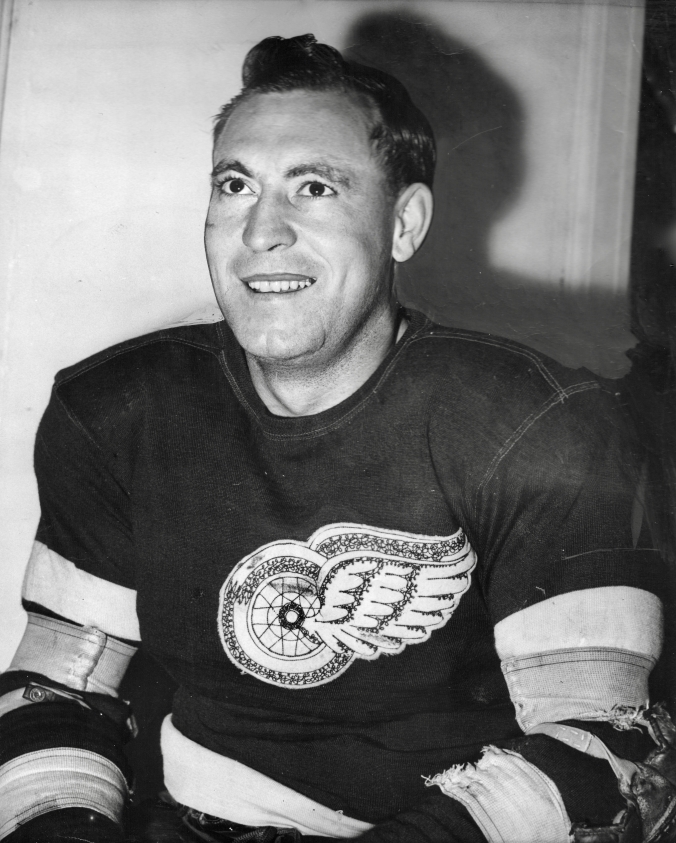 Deke And Dash: Mud Bruneteau was on the ice in Boston on December 1, 1942, when his Red Wings lost 5-2 to the Bruins. With his teammates, he bustled out of there, too, to catch to catch a train home.

The Boston Bruins started the 1942-43 NHL season slowly, losing their first four games. Then again, to launch that wartime campaign, they weren’t exactly playing with a full deck. With Milt Schmidt, Bobby Bauer, and Porky Dumart gone to war and Boston’s civilian roster thinned by injuries and immigration troubles, coach Art Ross found just 12 players to dress (three under the league limit) for an early-November 3-0 loss to the Detroit Red Wings.

The Bruins turned themselves around, winning five of their next seven games as November came to an end. Key to their revival was a new forward line that The Boston Globewas was still wondering how best to nickname: Sprout Line or Baby Line for the trio that had 17-year-old Don Gallinger centering Bill Shill, 19, and 16-year-old Bep Guidolin?

Whatever you wanted to handle them, Shill contributed Boston’s third goal in the first period of the game the Bruins played on this night in 1942 against the Red Wings, with assists to both linemates. Detroit was atop the NHL standings by then, the Bruins in fourth place as the teams got together at the Boston Garden. The result doesn’t seem to have been much in doubt after that, and Bruins did indeed cruise to a 5-2 win to climb into a tie for second place overall.

What you might have noted if you were watching the ice right up until the end of the game was that … well, the Red Wings weren’t. Not all of them, anyway.

It seems that with time ticking away in the third, Detroit coach Jack Adams’ thoughts turned to the 11-o’clock train he wanted to catch from Boston’s South Station. Here’s how the Globe reported what happened next:

With three minutes to play and the Wings three goals behind, Manager Jack Adams cleared the bench of all but two subs and told them to hustle into the dressing room and change into their street pants. A moment later the bench was cleared completely — and the final few minutes of the game saw a losing team making only a feeble effort to come from behind.

The Globe thought this was poor form: “one of the traditional things about athletes is that the loser usually goes down fighting.”

For his part, Art Ross lodged a complaint with NHL President Frank Calder. Calder may have had a quiet word with Adams, but I can’t find evidence of any rebuke or sanction that went public. That doesn’t mean Ross didn’t have his say in the papers. “There was no transportation problem,” Ross told reporters. The Wings, he pointed out that Tuesday evening, didn’t play again until Sunday. “The team had five days to get home,” he said. And, also: “They could walk the distance in that time.”

Now, his own Bruins — just that past Saturday, in Montreal, the Boston squad was left just 11 minutes to get from the Forum to Westmount Station where they had to catch the train to New York for a game the following night. “Not a Boston player left his bench until the last ten seconds,” Ross said, “and then only to avoid crowd congestion. The squad had to go to the train wearing its playing uniforms.”

The Globe detailed this dash, too, adding one important detail: the surging Bruins did, in Montreal, change from skates to shoes.