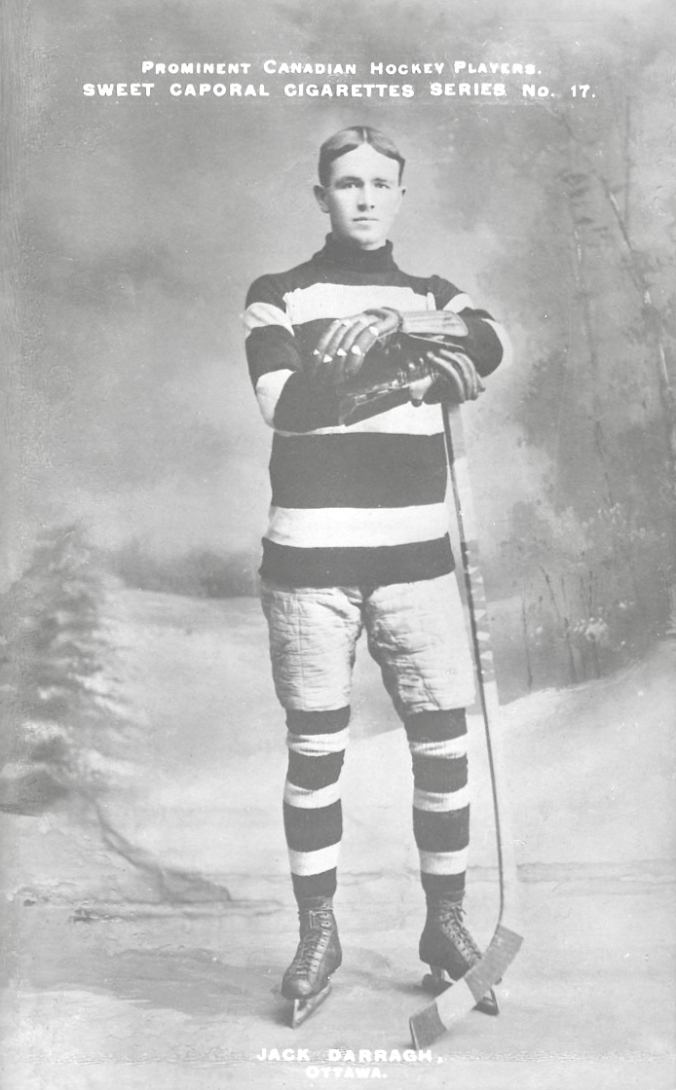 Jack Darragh helped Ottawa’s original Senators win four Stanley Cups in his time (and theirs), and for those efforts (and others) he was duly inducted into the Hall of Hockey Fame in 1963. Ottawa-born on a Thursday of this date in 1890, Darragh was an industrious right winger who only ever played for teams in hometown, suiting up for the amateur Stewartons and Cliffsides before he signed with the National Hockey Association’s Senators in 1910.

He was fast on his skates, they say, deft with pucks, insistent in his checking. He also has the shared distinction of having staged the NHL’s very first contract hold-out — on the very night the new league made its debut, no less. Hosting the Montreal Canadiens at their Laurier Avenue rink on December 19, 1917, the Senators skated into the first period with just a single substitute on the bench while Darragh and teammate Hamby Shore continued to haggle with management over the salaries they’d be paid. They’d resolved their differences in time for the second period, when both players made their debuts. Having built a 3-0 lead over the shorthanded home team, Canadiens went on to win the game 7-4.

Darragh finished that first NHL season as one of Ottawa’s leading scorers, and he’d keep that up over the course of four ensuing seasons. Known for his penchant for scoring key goals, he notched the decisive pair in the 2-1 win that beat the Vancouver Millionaires in the fifth game of the finals and secured the 1921 Stanley Cup for Ottawa.

That was supposed to be Darragh’s final professional game. His day-job was as an accountant with the Ottawa Dairy Company, and he kept doing that when he’d given up hockey. He kept hens, for a hobby, and I have it on good authority that I’m willing to cite here that “he had a wonderful pen of Rhode Island Reds.” When he went to the rink through the winter of 1921-22, it was to coach or referee.

He changed his mind in the fall of 1922, unretiring and returning to NHL ice to play parts of two more seasons. He was dogged in his final year, 1923-24, by a broken right kneecap, and the word was that he planned to retire again. He died at the age of 33 in June of 1924 of peritonitis.

Phrases portraying Darragh’s exploits on the ice sometimes intimated, in 1915, say, that “when Jack is right, there is not a player in the Association that has anything on him.” At other times, in 1920, he was described as the “handy all round man of the squad,” and also as “the ice cream expert” — referring, that last one, to that aforementioned ability for scoring timely goals that won games for his team.

A 1917 dispatch suggested that in a game against the Montreal Wanderers he may not have extended himself until the second period expired, but thereafter “shot up and down the ice like a rocket, scoring the last goal of the match.”

Maybe, finally, can we reflect his prowess as a checker by way of a game from 1913 when Ottawa downed the Montreal Canadiens thanks in large part to Darragh’s bottling of Canadiens’ star Didier Pitre? He was unconscious that night — literally. Praising Darragh’s effort, The Ottawa Citizen continued on from an appreciation of goaltender Percy LeSueur’s part in the triumph:

Jack Darragh was another tower of strength. Jack matched youth and stamina against the speed and strength of Pitre and had the better of the big Frenchman in every page of the one-side story. Darragh was badly battered, but whenever Pitre attempted his fancy work he found the boy with the bruised forehead and scarred face there to outskate and outbrain him. Darragh’s checking back was [sic] in a feature of the game. Pitre tried to put him away with a wicked blow in the third session, but Darragh jumped to his feet and was in the thick of it one minute after he had been stretched out cold behind his own nets.