Northern Rock: Gus Mortson spent his first six seasons as a stalwart of the Toronto Maple Leafs’ defence before a 1952 trade took him to Chicago for a further six seasons, three of which he served as captain. His friend Ted Lindsay ended up as a teammate in Chicago during Mortson’s final season there. He played a single season — his last — in Detroit, 1958-59.

Ted Lindsay and Gus Mortson were old pals from up north in Ontario, played together as juniors at St. Michael’s College in Toronto, spent summers together prospecting for gold. Didn’t matter, once they skated out on NHL ice as opponents. “I don’t know anybody when a hockey game starts,” was Lindsay’s view of it, voiced in 1947.

Born on this day in 1925 in New Liskeard, Ontario, Mortson was 90 when he died in 2015. He joined the Toronto Maple Leafs as a defenceman in October of 1946, by which time Lindsay had already been a Detroit Red Wing for two seasons. When they met in Mortson’s debut, Lindsay welcomed his friend to the NHL with a cross-check that cut his nose. A frisky 21 at the start of that inaugural year, Mortson was, by the end of the regular season, the league’s leader in amassing penalty minutes. Nugget seems to be the nickname the newspapers preferred for him at the time, short for The Gold Nugget Kid; later, he’d also answer to Old Hardrock.

Mortson and Lindsay would clash (and exchange punches) more than once in their subsequent NHL careers, including on an infamous occasion when the Leafs and the Red Wings met in the first round of the ’47 playoffs.

Here, from The Windsor Star, is Doug Vaughan’s account of the proceedings that roiled the fourth game of the semi-final:

Rough-going Ted Lindsay put the match to the fuse when he cut down Gus (Nugget) Mortson, Leaf defenceman, and got away with it. Mortson came up fighting mad and not caring whom he hit — as long as the individual was wearing a red sweater. The innocent victim happened to be Bill Quackenbush. Mortson gave him a terrific cross check and the Wing rearguard had to be assisted from the ice with a wrenched left knee.

Mortson was given a two minute penalty. He was just sitting down in the box when Gordie Howe of the Wings skated over to the boards. Howe took a punch at Mortson. The Leaf player punched back. Policeman William Kamian grabbed Mortson by the throat. Players from both teams swarmed across the ice to see what was going on. Two Toronto scribes joined in the fray. Mortson punched the policeman. The policeman fought back. Somebody hurled a chair from the box seats back of the penalty box. It bounced off Mortson’s back and hit Roy Conacher of the Wings, who was standing out on the ice, on the nose. Additional policemen swarmed into the run-way to help restore order.

When peace and calm reigned once again the insane individual who had hurled the chair had been lugged off to the hoosegow by the police and Howe and Mortson were each given ten minutes [sic] misconduct penalties. Fortunately nobody was serious injured.

Globe and Mail columnist Jim Coleman wasn’t on hand in Detroit that night, but that didn’t keep him from filing his own vivid dispatch. If nothing else, it’s a master-class in period jocularity, a true classic from the catalogue of reporting NHL chaos as if it were all part of a big vaudeville act. The prose is entertaining, still, 72 years later. Without steering off into finger-wagging, may I also submit that the guffawing acceptance of the league’s long business-as-usual acceptance of violence manages (still) to astonish me?

Mortson, in Coleman’s telling, was penalized for “mopery and gawk.” In the penalty box,

he indulged in some ineffectual fisticuffs with Gordon Howe. At this juncture, Mortson was gozzled by a Detroit newspaperman and a Detroit constable.

In the turmoil a customer hurled a chair which splattered on the penalty-box rail and hit Referee George Hayes and Roy Conacher. It is alleged, then, that our two confreres, W. Thomas Munns and James Vipond, swarmed to the fray.

Munns was the Globe’s sports editor, Vipond a reporter. Coleman took down their testimony, including this from Vipond:

“Mortson took a swing at Howe and then Mortson was gozzled by a Detroit newspaperman. A Detoit policeman gozzled Mortson, too, and was lugging him around by the neck and massaging his noggin with the other hand. Now, I realized that Mortson is a wild and vicious character, and would most certainly break the copper into small pieces, so I went to the copper’s assistance. I put both arms around his neck and tugged him away gently, just so that he would be out of harm’s way. There is a rumour to the effect that I hit him, but this is false and unjust — a fly was perched on the constable’s cheek, and I was attempting only to dislodge it before the fly stamped on his eyeball.”

It took Toronto one more (relatively peaceable) game to eliminate Detroit and move on to meet (and beat) Montreal for the Stanley Cup that year. Before they left the ice at the end of the semi-final series, fans and writers and at least one photographer noted the renewal of Mortson’s and Lindsay’s friendship: 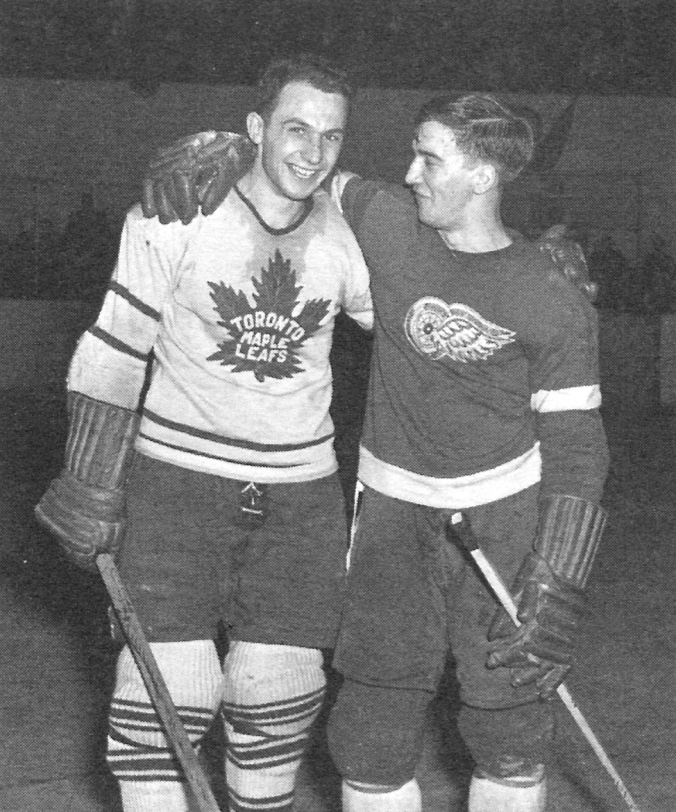