The hockey headlines from 57 years ago tonight, when the Toronto Maple Leafs hosted the New York Rangers? Leafs won, 4-1, to solidify their hold on second place in the NHL standings. A 20-year-old Dave Dryden was a story that night, too. As the on-call back-up in those days before teams regularly travelled with spare goaltenders, the Junior-A Toronto Marlboros’ ’minder was summoned from the stands early in the second period after the Rangers’ Gump Worsley left the game with an injured elbow. In his NHL debut, clad in Worsley’s too-small sweater, Dryden stopped 23 shots in his only career appearance for the Rangers, allowing three goals. “He played extremely well,” New York GM Muzz Patrick declared. “He’s a darn good prospect.”

But Dryden’s pro debut wasn’t the reason the game made the front page of The Globe and Mail the following Monday. The story there, just below the portrait of Queen Elizabeth II (ten years on the throne) and the latest on the crisis in Algeria, was the bomb that someone threw from the stands at the Leafs’ bench while the band was playing “God Save The Queen” before the opening face-off.

To sum up: at an NHL game in 1962, two-and-a-half months before Toronto won the Stanley Cup, a small bomb exploded near Bobby Baun at one end of the Leafs’ bench, briefly blinding the defenceman, and linesman Matt Pavelich, too.

Despite its title, Bobby Baun’s 2000 autobiography doesn’t mention the 1962 incident.

That first report allowed that it might have been a “giant firecracker,” but Toronto police detectives would subsequently classify the device as a “homemade bomb.” No-one, apparently, saw who tossed it, and the police investigation doesn’t seem to have turned up a perpetrator. From what I can see, all trace of the incident disappeared from the papers within the week. File it away, I guess, as an unsolved mystery whose consequences could have been much more serious than they were.

“The blast came,” the Globe recounted, “when the house lights were dimmed and the drums of the band were rolling at the start of the National Anthem. There was a loud noise, a bright flash, and a cloud of smoke. Players and fans in the vicinity said the smoke smelled of gunpowder.”

Pavelich was standing by the gate at the southern end of the Leafs’ bench. He said he felt something graze his nose, then his forearm before the explosion. From the Globe:

There were holes in his sweater from wrist to elbow on the right sleeve and the front of the sweater was seared.

There also were powder marks on his clothing as well as on Baun’s glove, which he had raised to his face automatically when he heard the blast. Pavelich first clutched at his arm, then held a hand over his eyes.

“It just knocked me off balance,” Baun said, “and both Pavelich and I had trouble seeing for a minute or so. It exploded at the top of the gate.”

The game went ahead. I can’t tell you much about how jarred Pavelich was, or whether Baun’s play showed any shell-shock. The latter, just back in the line-up after a wrist injury, seems to have played as Toronto’s fifth defenceman, spelling Al Arbour. He took a second-period penalty, two minutes for interference.

Evidence of the blast did eventually go to laboratory used by Ontario’s Attorney-General: scrapings from the ice, a towel Pavelich used to wipe his face, his sweater, Baun’s glove. No trace of the device itself was discovered.

Globe columnist Jim Vipond couldn’t understand how the bomber could have gone undetected by his neighbours in the stands. He urged anyone who knew anything to speak up. No-one seems to have come forward, though. The lab analysis didn’t reveal anything, either.

The Leafs did step up security for their next home game, against the Boston Bruins. Private detectives and extra police were on duty at the Gardens that night. And this time, too, when the band played the anthem, the lights weren’t dimmed quite so low. 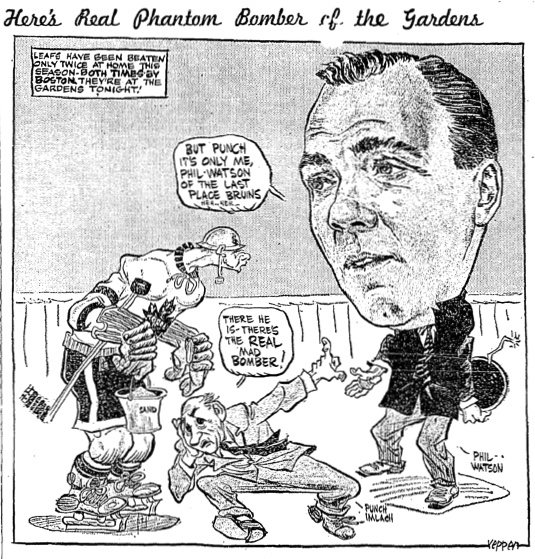 Aftermath: In the week after a bomb exploded at Maple Leaf Gardens this month in 1962, a Toronto cartoonist picked up on the news.