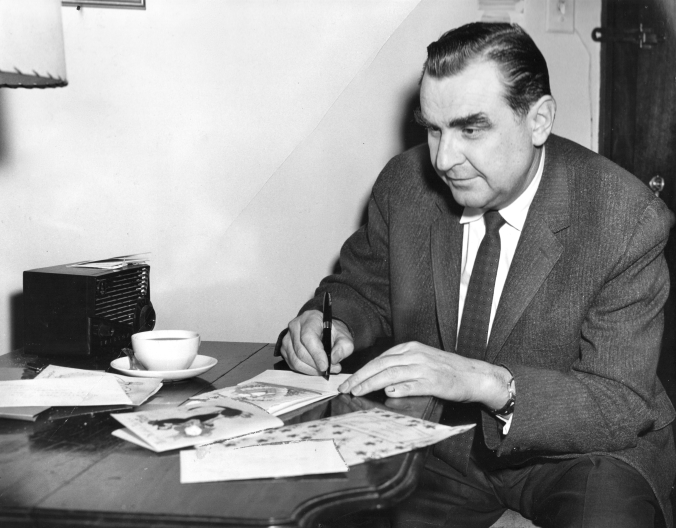 Not sure exactly how it happened that a photographer came across Chicago Black Hawks coach Rudy Pilous writing out Valentine’s Day cards in February of 1962 to send home to his family in St. Catharines, Ontario, but he does appear to be working hard on coming up with just the right message. The Black Hawks were the reigning Stanley Cup champions at the time, and on February 14 they were holding firm in third place in the six-team NHL standings, behind Toronto and Montreal. They hosted the New York Rangers on this night 57 years ago, and beat them 4-3. A few further Rudy Pilous notes from that month:

• Asked about Chicago’s recent surge in the standings, Pilous said, “I like to get my clubs in shape gradually. We like to feel around during the first half of the season and start our move in January.”

• “We’re playing the same kind of hockey that won us the Stanley Cup,” Pilous told Tom Fitzgerald of the Boston Globe this month.

• Dink Carroll of the Montreal Gazette asked him who was the hardest player to check in the NHL. “Our guy,” he said, without a pause, “Bobby Hull.” Also in February, Pilous was adamant that Hull should be the left wing named to the NHL’s All-Star first team that season ahead of Toronto’s Frank Mahovlich. The Hawks’ Stan Mikita was another clear choice. “Mikita is the best centre in the league on any basis you care to compare him,” Pilous insisted.

• Mid-month, Pilous, who was 47, talked a challenge he’d received from one of his defencemen, the unspeedy Moose Vasko, to a two-lap race of the ice at Chicago Stadium. I don’t know how it turned out — at this point in his preparation, Pilous admitted that he’d only managed a lap-and-a-half.

• Pilous lodged a complaint with NHL referee-in-chief Carl Voss regarding the liberties he felt opposing forwards were taking with Chicago goaltender Glenn Hall. “Glenn hasn’t protested,” he said, “but I’ve seen the bruises. Officials should watch closely around Hall’s net. I don’t mind if Hall gets some stick butts, or a few elbows, but I don’t want ’em climbing on his back.”

• Spoiler alert: Chicago did beat Montreal in the playoffs, but come the finals in April, up against Toronto, they fell in six games. Stan Mikita and Bobby Hull were named to the 1stAll-Star team, and Glenn Hall to the 2nd.