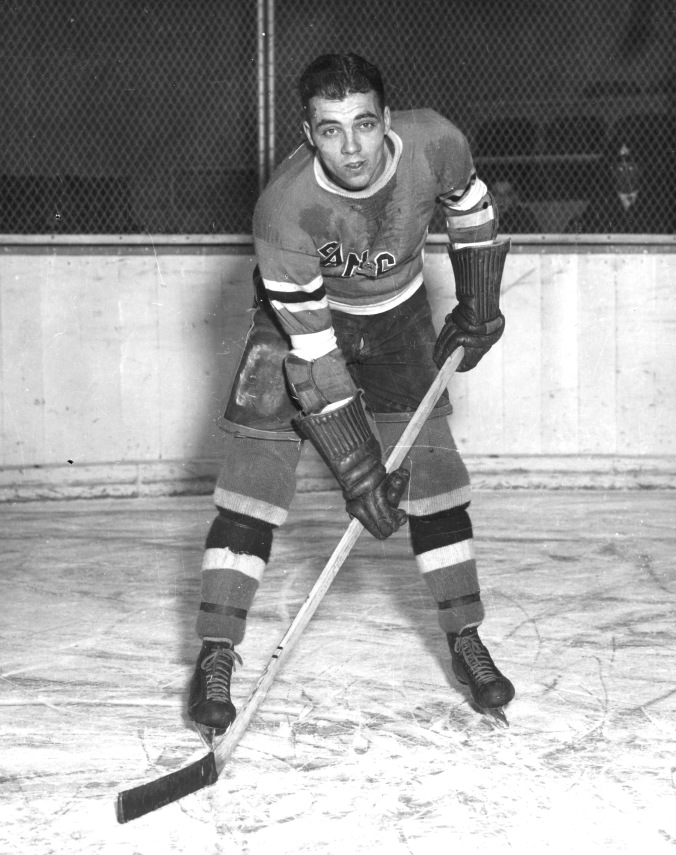 Phil Watson’s hair was wavy brown, and parted in the middle; his eyes were alert and green. This was in 1947, when Watson was 32 and a prominent right winger and sometime centreman for the New York Rangers, a talented, tireless, and conspicuously belligerent veteran of a dozen NHL seasons. According to Robert Lewis Taylor, Watson was one of the best-looking players in the game in those years — and it is true that he was, a decade earlier, recruited to double for Clark Gable in a hockey movie that was never released. Watson’s smile, Taylor wrote, was “uncommonly pleasant,” if “largely synthetic” — to replace the four top front teeth he’d had knocked out in the line of duty, the Rangers bought him the dental bridge he wore when he wasn’t doing battle on the ice.

Watson was born in Montreal on a Friday of this date in 1914; he died in 1991 at the age of 76. The man they called Phiery Phil got his name of the Stanley Cup twice — with the Rangers in 1940 and, in 1944, when wartime restrictions kept him home in Canada, as a member of the  Montreal Canadiens. In 13 NHL seasons, he proved himself to be a skilled defensive player as well as a first-class annoyance to his opponents. He also contributed offensively, and led the league in assists in 1941-42.

As a coach, he got two cracks at steering the Rangers during the 1950s and another, in the ’60s, behind the Boston Bruins’ bench. He coached two seasons in the WHA in the ’70s, guiding the Blazers in Philadelphia and subsequently in Vancouver.

For views of Watson’s background, unruly prowess on ice (think Brad Marchand before he reined himself in), and surpassing eccentricity, I recommend the long, droll, eventful profile Robert Lewis Taylor published in The New Yorker in 1947 under the title “Disorder On The Rink.” I count it as a bit of a lost classic of hockey non-fiction, well worth your while, particularly if you’re looking to round out your understanding of just how outlandishly unrestrained the excesses of NHL hockey once were.

It doesn’t extend to Watson’s coaching years, and it bypasses several key episodes in the Watson story. It doesn’t delve into the circumstances under which Watson annoyed his own Ranger goaltender so thoroughly that Chuck Rayner attacked him in the team’s dressing room. Also missing: his brief 1938 brush with Hollywood stardom wherein he served as Clark Gable’s skating and puckhandling stand-in opposite Myrna Loy in an ill-fated feature called The Great Canadian.

A taste of what Taylor does offer up in his portrayal of Watson’s tempestuous tenure in the NHL, in three excerpts:

The two most effective methods of taking a puck away from an advancing opponent are probing for it with a stick, which is known as “poke checking,” and slamming into the man bodily, which is called “body checking.” At these two arts, Watson has no master. A head-on collision with any moving object smaller than a pick-up truck provides him with the sort of comfort that some bankers get from foreclosing on a valuable farm.

Most hockey players consider it bad form to strike a referee with a stick, and the rules are explicit on the subject — the striker is subject to a fine or to suspension from the league. Watson, displaying a kind of instinctive legal ingenuity, has detected loopholes in the code: there is no mention of spitting in a referee’s face. In moments of extreme urgency, he performs this act and generally draws a severe penalty, under whatever rule the referee feels may be stretched to cover the case.

On one occasion, when he was relating an anecdote to Lew Burton, the Journal-American sportswriter, in the Rangers’ dressing room after a game which had featured a really spectacular brawl between him and the Detroit Red Wings, Burton interrupted to ask, “How’d it get started, Phil?” Watson jumped up, cried, “I tell you, Lew, they started it like this!,” and brought a hockey stick crashing down on Burton’s head, benching him for about twenty minutes. “It was the wrong way to tell that story,” Watson frequently says, with a gloomy inflection.