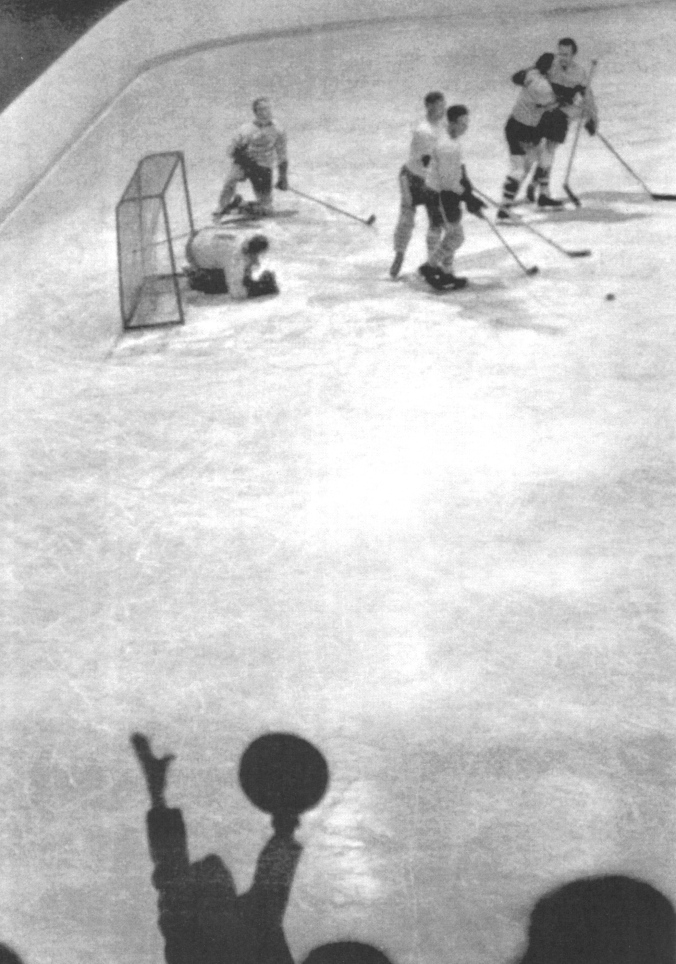 Laid Low: A joyful fan celebrates while sad scenes ensue around Canada’s net in the third period of Canada’s game against Great Britain at the 1936 Winter Olympics in Garmisch-Partenkirchen, Germany. The score was tied 1-1 when, in the moments before this photograph was taken, Britain’s Canadian-born defenceman Gordon Dailley skated in on Canadian goaltender Dinty Moore, before passing to Chirp Brenchley, who scored to win the game (and a surprise gold medal) for Britain.

Canada skates out to a rare World Championships meeting with Great Britain later today at the Steel Arena in Košice, Slovakia. The first time the two countries met in the tournament was in January of 1935 at Davos in Switzerland, when the Winnipeg Monarchs wore the maple leaf in a 4-2 Canadian win. There were clashes before that at the Olympics, starting in 1924 at Chamonix, France, when Canada’s victory was by a score of 19-2. Four years later in St. Moritz, Switzerland, Canada cruised to a 14-0 win.

At the 1936 Winter Olympics in Garmisch-Partenkirchen, Germany, the Port Arthur Bearcats formed the core of the Dominion team, who were (once again/as always) considered tournament favourites by dint of being Canadian. But after disposing with Poland, Latvia, and Austria, the defending champions lost in a 2-1 upset to Great Britain. It wasn’t the end of the world, but the shock and the same was severe. You’ll find more on that (+ bonus alibis and rationalizing) over here. Suffice to say that further Canadian victories over Hungary, Germany, Czechoslovakia, and the United States wasn’t enough to snatch back the gold, which the British claimed, leaving Canada to settle, bitterly enough, for silver.