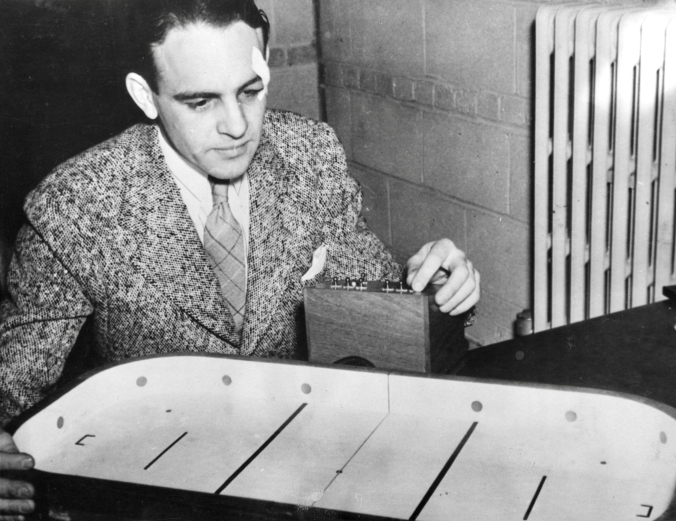 Switch Up: In 1940, Herbie Lewis was out of the NHL, steering the AHL Indianapolis Capitals as player-coach. He had a bold plan to renovate the way referees called games, and where from, that put them in command of a system of lights. He even had a working model to show how it all might work.

Jason Kay is on the case in the latest edition of The Hockey News. “Do The Refs Really Suck?” is the headline over his editor-in-chief’s note therein in which he wonders whether NHL referees deserve the derision they get at playoff time. No, he concludes, they don’t. “Hockey officials arguably have the toughest job among pro sports referees,” he writes. “The question of speed + physicality + instantaneousness decisions = occasional errors.” Fans should understand, sympathize, stay civil. Oh, and hey, the NHL? Kay’s not the first to advocate, and reasonably enough, for the league to give officials “at least as much access to technology as viewers and spectators.”

None of that is going to calm the city of Boston, its Bruins, their fans, most fair-minded independents, pundits, and/or interested passersby. The story of Thursday night’s game, if you missed it:

Headlines from across the Boston mediascape echoed and amplified the local incredulity:

The clown show continues in Game 5: The NHL gets faster while the referees fall behind
(The Athletic)

Series deficit about more than officials, but Game 5 was a crime
(Boston Globe)

Meanwhile, down at the St. Louis Dispatch, the mood glowed a little lighter:

Missed calls and the fallible refs whose whistles fail to blow aren’t new to hockey, of hockey; controversies relating to hockey’s rulebook are as old as the league itself. So too is the question of what to do about them. Social media takes care of defaming and dunning officials who are perceived to have erred, and the NHL is in the habit of exiling those who blunder, but the shaming and the shunning doesn’t actually solve anything. Twitter sizzled with suggestions (go back to the old single-referee system; call more penalties, period; wake the fuck up, @NHL).

Again, I really think the NHL has to seriously look at removing one of the referees from the playing surface & putting them in the stands as an eye-in-the-sky capable of whistling down plays his on-ice counterpart may have missed. Fewer replays, more space for NHLers to perform.

This last notion isn’t an entirely new one.

It’s positively antique, in fact. Herewith, a couple of notions of how hockey refereeing might be overhauled from a couple of would-be hockey innovators of old. They dreamed, no question, of enhancing the quality of hockey officiating, but their missionarying also had mercy in mind: they wanted to remove referees to safety, where wrathful fans and players couldn’t reach them.

First up, Irvin Erb, who in 1930s served as manager of a couple of OHA teams in Kitchener-Waterloo, Ontario. His main concern seems to have been for health and well-being of the referees, which is commendable. Here’s what he wanted to do, from a 1931 newspaper report:

Instead of having the officials on the ice, as at present, he would enclose them in a glass, sound-proof cage along the sidelines where they would be safe from the stormy protests of the crowd which sometimes takes the form of showers of coins, peanuts, chairs, and bottles.

The cage would be equipped with loud speakers, through which the referee’s decision could be made known. Competent referees who have found officiating on the ice too strenuous could return to the game, in Erb’s opinion.

Almost a decade later, Herbie Lewis, a Hall-of-Fame left winger, had his own plan for preserving referees from harm. Lewis played his entire career, 11 seasons, in Detroit, where he started as a Cougar in 1928, morphing subsequently into a Falcon when the franchise did, and then a Red Wing. By 1940, he was out of the NHL, coach the AHL’s Indianapolis Capitals while also still playing on their forward line.

“This may sound like a fairytale,” a report on his brainstorm began, “but there’s a hockey player who wants to do something for the poor, downtrodden referee.”

Lewis aimed to elevate officials above the fray:

Herbie would build a high perch for the referee, somewhat like those used by tennis officials. From there he would regulate the game with a system of lights and be out of the reach of irate players.

The lights, I guess, would be set into the boards, as shown in Lewis’ pictured prototype, above. A flash of red would stop play, with the amber indicating where the foul had happened. “Other lights on the scoreboard would show the nature of a penalty and on whom it was called.”

And so players would … escort themselves to the penalty bench? Restrain themselves from tussling, police their own fights, just skate away? Possibly would there be further, much brighter lights that the referee could zap into players’ eyes to illuminate their misconduct and/or temporarily blind them?

Lewis probably had it all worked out in detail. It’s likely he was ready to explain the whole luminous scheme just as soon as someone took it seriously.

“If we can get this kind of a system installed,” he advised, “we’ll have better officiating and less trouble.”