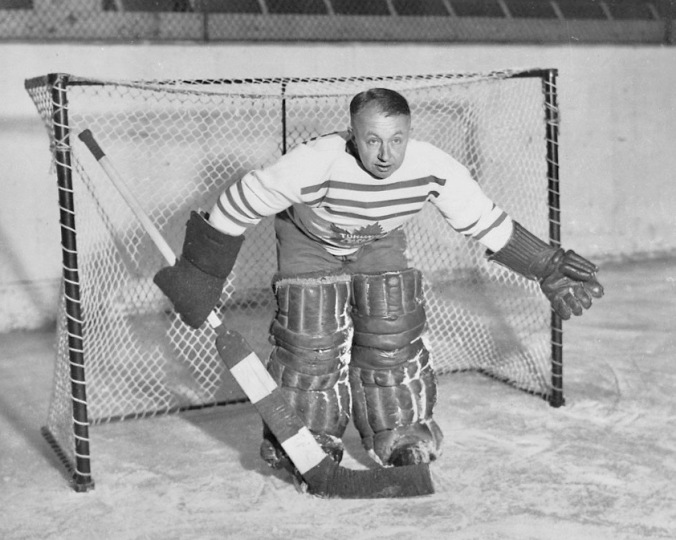 When the NHL was young, in a time of small goaltenders, George Hainsworth was … not so tiny as, say, Roy Worters, who measured in at 5’3’’ and a slight 135 pounds. Hainsworth, born in Gravenhurst, Ontario, on a Monday of this date in 1893, was a stout 5’6” with 150 pounds on him. His reputation for rebuffing pucks was already sizeable when he jumped from the WHL Saskatoon Sheiks to the NHL’s Montreal Canadiens in 1926. There, he not only succeeded the great Georges Vézina but won the first three editions of the trophy that was minted in Vézina’s name to honour the best goaltender in the league. In 1928-29 (incredibly), Hainsworth registered 22 shutouts in 44 regular-season games. He went on to help Montreal win two Stanley Cups, in 1930 and ’31. After seven seasons with the Canadiens, he was traded to Toronto in exchange for Lorne Chabot. Five seasons he spent with the Maple Leafs before returning for one more campaign with Montreal, 1936-37, before retiring at the age of 41. He was serving as an alderman in Kitchener, Ontario, when he was killed in a car accident near his hometown in the fall of 1950. He was 57.

“We suppose that one of the reasons hockey is such a great sport,” ran a memorial editorial in the Saskatoon Star-Phoenix, “is that it demands the basic elements of man’s struggle for existence: courage, ability, and intelligence. These were the qualities which made George Hainsworth a star. So spare in stature that it seemed a well-driven puck must surely bowl him over like a ten-pin, he showed, in measure out of proportion to his tiny frame the mettle which every goalkeeper must have, plus the speed and deftness to turn aside flying rubber and the brains to outguess on-rushing forwards. The combination made him one of the greatest goalies in hockey history, and his net-minding feats … will be remembered long after his untimely death and its unfortunate cause have been forgotten.” Hainsworth was inducted in the Hockey Hall of Fame in 1961.