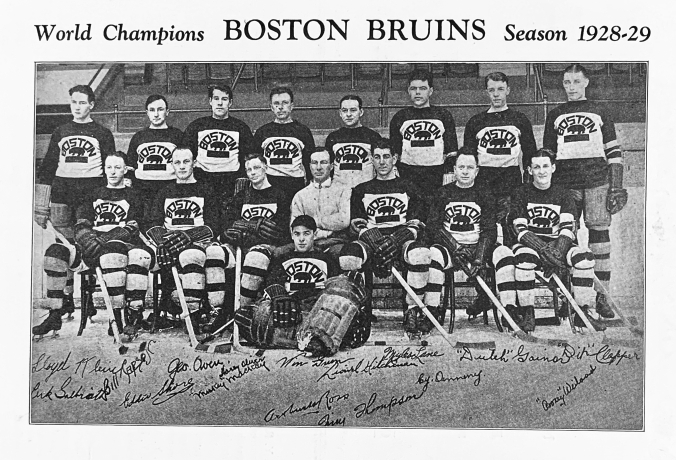 (A version of this post appeared in The New York Times on June 10, 2019, under the headline “When the Boston Bruins Won Their First Stanley Cup. Twice.”)

The Boston Bruins won their first Stanley Cup in Montreal one Saturday night in March of 1929, sweeping aside the mighty Canadiens. Back home, a crowd of 3,000 met the team’s train at North Station, creating a clamor on a scale usually reserved for World-Series-winning baseball players and troops returning from war.

Then again, the series with Montreal was only a semi-final. Any doubts to their hold on the trophy were put to rest six days later, when the Bruins definitively won the Cup, conquering the Rangers in New York.

Two Stanley Cups in a week? Sounds unlikely. Not something that’s reflected in the records, either: those distinctly show the Bruins having won six championships, not seven.

And yet 90 years ago, a brief confusion in the hockey continuum did seem to present the Bruins with the opportunity for an unprecedented Stanley Cup double.

The 1928-29 season was a banner year for the 12-year-old NHL. From just four teams in 1923-24, the league had spread to ten cities, six in the United States. Overall attendance was up by 22 per cent from the previous season, with the Bruins rated the biggest draw.

They had been the first American team to join the NHL, bankrolled by grocery magnate Charles Adams. His first hire in 1924 was 38-year-old Art Ross, a Montrealer with a reputation as a genius of hockey strategy and innovation who’d also, in younger, playing days, won two Stanley Cups.

First awarded in 1893 by Lord Stanley of Preston, Canada’s governor-general, hockey’s most coveted prize was, from the start, a challenge cup intended to reward the best Canadian team. Won by Montreal teams, mostly, in the early years, it also went to Winnipeg, Ottawa, and Kenora, Ontario. In 1917, just before the advent of the NHL, the Cup left home for the first time, claimed by Seattle’s Metropolitans.

Opening Night: On Tuesday, November 20, 1928, the Bruins hosted Montreal’s Canadiens to kick off the new season and inaugurate the brand-new Boston Garden. Boston would get their revenge before the year was out, but on this night Montreal prevailed by a score of 1-0.

From 1918 on, Stanley Cup finals pitted the league’s champion against the best team from western Canada. That arrangement lasted through 1926, after which only NHL teams played for the Cup. The league further consolidated its prerogative in 1947 when the trustees formally delegated full authority for Cup affairs to the league.

Still, in 1927, NHL President Frank Calder believed (so he said) in the Cup’s original mandate, and that any serious challenger deemed worthy by the trustees should be allowed to play for it. He told an Ottawa audience that he favoured a competition beyond the NHL schedule, something similar to English soccer’s F.A. Cup, whereby any team in North America, amateur or professional, might take a run at the championship.

In the spring of 1928, the Bruins and Canadiens ended up atop their respective regular-season divisions, the American and Canadian. But both teams faltered on the road to the finals, allowing the lesserly touted New York Rangers to take the Cup.

Come September of 1928, Calder and NHL’s governors prepared for the new season by revamping the playoff system. To ensure that at least one top-performing team made it to the finals, the new format saw divisional leaders granted byes to a semi-final that would send one of them on to vie for the Cup against the team that survived a two-round playoff among the best of the rest. The purported architect of this new ordering? Boston manager Art Ross.

As they prevailed in their semi-final, the word from the Boston Globe was that, because this was a battle of divisional champs, the sacred trophy was indeed at stake. Why wouldn’t the winner automatically succeed the Rangers as Cup champions? Of course they would — whereupon, as of old, the competition would enter its “challenge phase,” with the new holders defending their claim against the winner of the other semi-final.

No Canadian newspaper seems to have reported any of this, despite the Globe’s assertion that the ruling was Frank Calder’s own. Hard to say whether the Globe was misled or just mistaken. Within a few days, the paper changed key: maybe the Bruins hadn’t “gained actual possession” of Canada’s Cup, but it was absolutely “theirs theoretically.” By the time Boston eliminated Montreal, Canadians used to claiming hockey as a proprietary technology all their own were otherwise occupied dealing with a traumatic new truth: for the first time in the 36-year history of the Stanley Cup, the (final) finals involved only foreign teams. Those didn’t last long: while the Rangers had earned the right to try to wrest back the title they might or might not have only just relinquished, Boston took the best-of-three final series in a brisk sweep.

“I’m proud of the boys,” Ross declared. “They’ve stood by me splendidly. Do you know not one of them has had a glass of beer since November?”

Training home again, this time from New York, the Bruins pulled into Boston’s South Station. But it was early Saturday morning, and no throng awaited the actual champions: the players quietly went home.

The team formally took possession of the coveted Cup when they reconvened, three days later, for a banquet in the Copley Plaza Hotel’s Swiss Room. The players’ rewards were individually rich, too: each received a share of playoff receipts, about $2,000 (nearly $30,000 in 2019 dollars), along with a $500 “purse of gold” from owner Adams. From Art Ross they each got a diamond ring, while faithful fans chipped in with gold watches for all.

Meanwhile, Canada kept mostly calm. One Vancouver newspaper did run a single-sentence editorial on the nation’s behalf, trying out what would become more and more of a traditional refrain as American-based teams continued to claim championships.

“Players imported from Canada won the Stanley Cup for Boston,” the Province wrote.