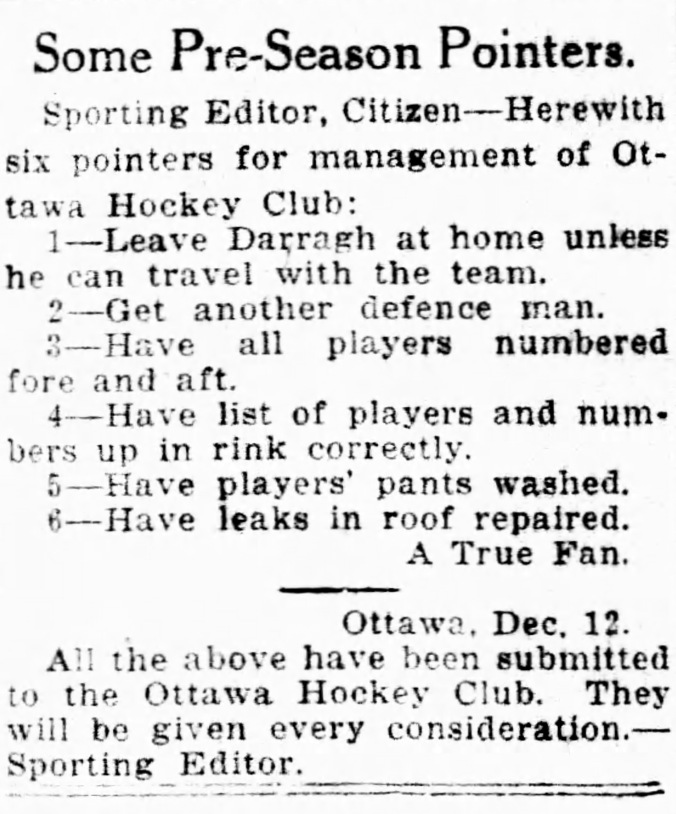 How to solve a problem like the Ottawa Senators? A hundred years ago, as the NHL headed into its third season, a helpful fan of the city’s original Sens thought he’d share his blueprint by way of his local newspaper. The he is a guess, based on this is 1919 we’re talking about and, also, because men.

Some notes for the margins: the league was a four-team affair that year, with a 24-game schedule that faced-off late in December. Pete Green was Ottawa’s new coach for 1919-20, insofar as this was his first season steering in the team in the young league: in the team’s pre-NHL days, he’d been involved with seven Stanley Cup-winning teams as trainer and coach going back to 1903.

Jack Darragh, a winger who’d end up in the Hockey Hall of Fame, had been playing for Ottawa since 1910, but now, at 29, he was negotiating a new contract by talking about retiring. He signed just before the season got underway. Darragh, who played all but one game that season, at home and away, finished fifth in NHL scoring.

The Senators were in the market for another defenceman: by mid-December, Coach Green was looking to add a man on the line to aid captain Eddie Gerard and Sprague Cleghorn. He didn’t, in the end, electing to move a forward back to help out, Georges Boucher.

I can’t speak to the state of the roof at Dey’s Arena, which stood on what is today Laurier Avenue on the site of Confederation Park. I can report that in April of 1920, the Senators did win their first NHL Stanley Cup beneath it, defeating the PCHL’s Seattle Metropolitans in five games. Jack Darragh decided it in the last of those: his game-winning goal was one of three he scored in a 6-1 Senators’ romp. I don’t have good information on whether or not his pants had been recently laundered.