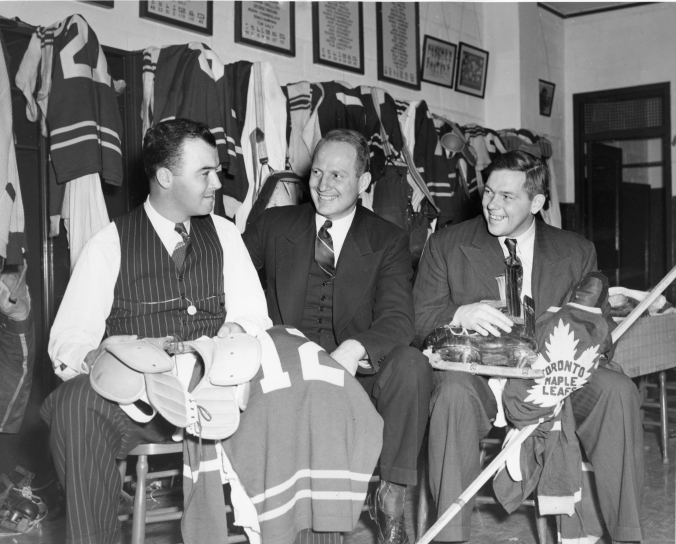 Question: who’s the last Toronto Maple Leaf to have led the NHL in regular-season scoring?

The answer, of course, is Gordie Drillon, a right winger who topped the table back in 1937-38, when the league’s eight teams played a 48-game schedule. He finished the year with 26 goals and 52 points, just ahead of his Leafly linemate, centreman Syl Apps, who counted 50 points. Moncton-born in 1913, Drillon died on a Tuesday of this date in 1986 at the age of 72. Big, obstinate, and opportunistic in front of the net, he was a purveyor of what in Phil Esposito’s day would come to be known as the garbage goal, the kind you score at close range, mostly out of pure doggedness, because you’re there with your stick on the ice, refusing to be evicted. Drillon served just four penalty minutes in ’38, and that won him a Lady Byng Memorial Trophy to go with his scoring title. He was also named to the NHL’s First All-Star Team that year, and the next. All of this you’ll find listed in his Hall of Fame profile; he was elevated to that hockey pantheon in 1975.

Given that Drillon played six of the seven seasons he skated in the NHL for the Leafs, you’d think he might rate as one of the team’s all-time greats, except for, well, no, he isn’t, is he, having been more or less booed out of town in 1942. Later Leafs (thinking of you, Larry Murphy; hey there, Jake Gardiner) would find themselves similarly hounded by fickle Leafs fans, accused of — what, exactly? Drillon was deemed to be lazy, a floater, not a team man. None of those subsequent Leafs, I’m going to say, suffered so harshly as him. ’42, was the year Toronto roared back in the finals from three games down to overthrow the Detroit Red Wings in seven games and win the championship. Gordie Drillon got his name on the Cup, but he wasn’t on the ice for the heroics. By then, Leafs’ majordomo Conn Smythe had turned on him, too, sending word to coach Hap Day to bench him. Drillon was peddled to the Montreal Canadiens that off-season, but he only lasted a year there. He was out of the NHL at 29.