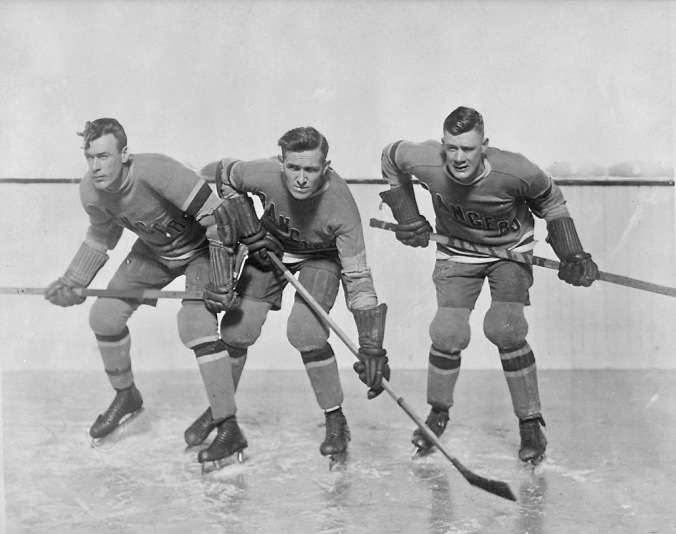 Here’s to Frank Boucher, born in Ottawa, Ontario, on a Monday of this date in 1901, one of the greatest centres the NHL has ever seen, even if — outrageously — the league forgot him when it dreamed up an anniversary list of its 100 best players in 2017, and despite the fact — are you kidding me? — that the Rangers have only seen fit to recognize the number Boucher wore in New York, 7, in Rod Gilbert’s honour.

Frank was one of four Boucher brothers to play major-league hockey: in 1923, while he was starring for the PCHA’s Vancouver Maroons, his elder brother Buck was anchoring the Ottawa Senators’ defence while two other siblings, Billy and Bobby, were forwards for the Montreal Canadiens. Following a two-year career as a constable with the Northwest Mounted Police, Frank had made his professional debut with Ottawa before making his way west to Vancouver. When the western league dissolved in 1926, Boucher’s rights were sold to Boston. It was on Conn Smythe’s short-lived Ranger watch that Boucher came to the Rangers before playing a single game for the Bruins. Having made his debut in New York in 1926, he soon found himself skating between brothers Bill and Bun Cook on the famous “Bread Line.”

With their help, New York raised two Stanley Cups, in 1928 and 1933. Seven times he won the Lady Byng Trophy as the NHL’s most gentlemanly player, and by the time he retired (for the first time) as a player in 1938, he was the NHL’s all-time leader in assists. Succeeding Lester Patrick as coach of the Rangers in 1939, he steered the team to another Stanley Cup in 1940. He wasn’t quite finished playing: in 1943, aged 42, he returned to the Rangers’ line-up for 15 games. Elected to hockey’s Hall of Fame in 1958, Frank Boucher died in December of 1977 at the age of 76.

Arranging a Boucher miscellany, I’d make sure to mention:

• His adjectives. If you look him up in old newspapers, you’ll find that these included scintillant (1925) and burglarious (1923). The latter refers to his skill in stealing pucks from opponents, the art of which he studied playing alongside the master himself, Frank Nighbor, when they were teammates in Ottawa. Hence Boucher’s nickname, Raffles, borrowed from the novels of E.W. Hornung, and most eagerly applied by newspapermen when Boucher was playing in Vancouver. As the local Sun explained in 1924, “The original ‘Raffles’ was the most gentlemanly burglar known to fiction and Vancouver’s ‘Raffles’ is the most picturesque and polite puck thief in hockey.”

Boucher has been up in the big leagues of hockey for ten years now. He could stay up in the top flight for ten additional years. Even if his speed were to desert him, Boucher could get by on his smartness. His noodle is packed with hockey savvy.

• Boucher’s recollection that the contract that manager Tommy Gorman of Ottawa’s (original) Senators signed him to in 1921 paid C$1,200 for the season — about C$17,000 in today’s money. “I leaped at the chance,” he later recollected, “little knowing what a terrible year was in store for me. I spent practically the whole season on the bench.”

The problem was the Ottawa line-up. In front of Clint Benedict’s goal, the Senators lined up Frank Nighbor, Punch Broadbent, Cy Denneny, Eddie Gerard, and Frank’s brother Buck. “They were all 60-minute men. In those days you didn’t come off the ice unless you were carried off.”

Dey’s Arena in Ottawa was, in those years, unheated, so along with fellow spares Billy Bell and King Clancy, Boucher petitioned Gorman and coach Pete Green to allow them to wait in the warmth of the Ottawa dressing room until they were needed. Management wasn’t keen on that, but they did finally relent, installing a buzzer system by which the bench could call forth replacements as needed. Boucher:

One buzz meant Clancy, two buzzes meant Bell and so on. So, for the balance of the season we sat in the dressing room, in full uniform, playing cards, with the roar of the crowd and the stamping of feet over our heads.

• The circumstances under which Boucher came to own the original Lady Byng Trophy in 1935. Nighbor was the first to win it, in 1925 and again in ’26, followed by Billy Burch in ’27. Boucher was next, and next, and next, and … next. Joe Primeau relieved him of his crown in 1932, but the following year Boucher was back for another winning run, this one lasting three consecutive years.

After Boucher won his seventh Lady Byng in 1935, Ottawa Journal columnist Walter Gilhooly wrote an open letter to the trophy’s donor patron respectfully suggesting, well, “that the cup be withdrawn and your trustees be instructed to turn it over to Frank Boucher to become his permanent possession” as a “well-earned keepsake of his time and his achievements in the National League.”

And so it happened. Within a week, the wife of Canada’s erstwhile governor-general had written from England to express her desire to see it done. NHL President Frank Calder saw to it. That’s how a new Byng came to be born in 1936, when Doc Romnes of the Chicago Black Hawks was voted the winner. We’ll never know whether, on merit, Boucher’s reign should have continued: having collected the original trophy for his mantelpiece, Boucher voluntarily withdrew his name from consideration for future Byngs.

• A partial inventory of the swag presented on “Frank Boucher Night” in February of 1951, when the Rangers celebrated the man and his service to the club at Madison Square Garden.

“Boucher had enough gifts to make a jackpot on a radio quiz program,” the Globe and Mail reported. “The fans gave him a 1951 Studebaker, the team a television set. The hockey writers presented him with a typewriter. His hometown friends at Mountain, Ont., contributed an oil burner for his farm.”

• A coda: in 1962, February, fire swept through the farmhouse, burning it to the ground. Boucher was in Regina, where he was serving as commissioner of the Saskatchewan Junior League; his son Earl and family escaped the flames. Not so Boucher’s hockey mementoes, most of which were destroyed, including the original Lady Byng Trophy.

The cause of the fire was thought to be mice chewing through electrical wires.

Bench Boss: Frank Boucher, hatted at left, coaches the New York Rangers to a Stanley Cup championship in April of 1940 at Maple Leaf Gardens in Toronto. On the bench before him, that’s Neil Colville (6), Muzz Patrick (15), and Alex Shibicky (4).