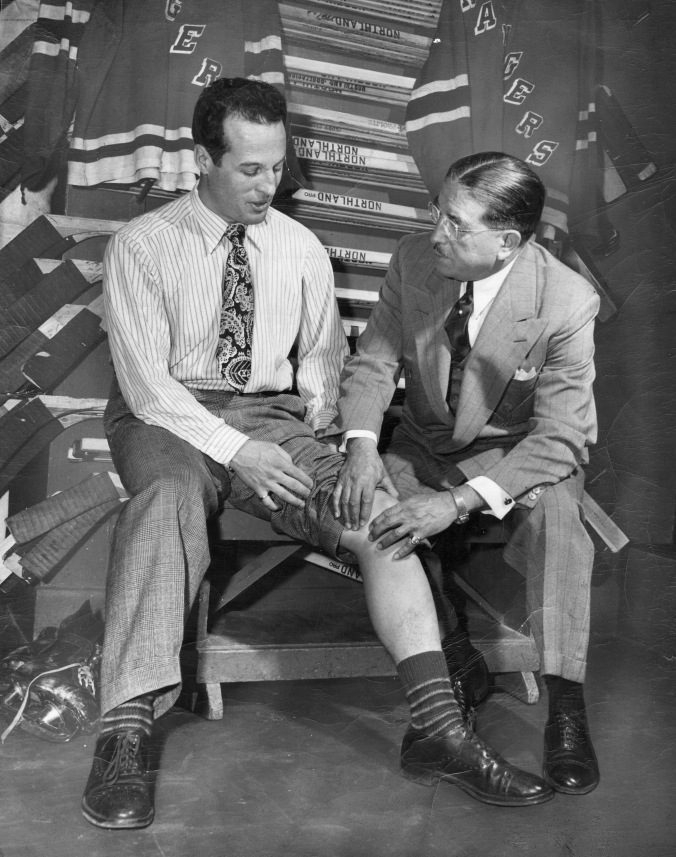 Tell Me Where It Hurts: New York Rangers’ doctor Dr. Vincent Nardiello gives Edgar Laprade’s wounded knee a once-over ahead of the Stanley Cup finals in April of 1950.

Born in Mine Centre up on Ontario’s Lakehead on a Friday of this date in 1919, Edgar Laprade was a reluctant NHLer. The Montreal Canadiens tried hard to sign him in the 1940s, after he’d led the Port Arthur Bearcats to an Allan Cup championship, but he joined the Canadian Army instead. He resisted the advances of the New York Rangers for a while, too, before eventually signing in 1945. Living in New York was “a headache,” he said in 1947, but that didn’t keep him from excelling on its ice: Laprade won the Calder Trophy as the NHL’s best rookie in 1945-46, as well as a Lady Byng, for peacefulness, in 1949-50, when he served one two-minute penalty through 60 games. That a was a relatively raucous year, for him: three times in his 10-year NHL career he made it through an entire season without taking a penalty. Laprade was a four-time All Star. Better late than never, Hockey’s Hall of Fame finally got around to welcoming him in 1993.

The closest he came to winning a Stanley Cup was in 1950, when the Rangers slipped into the playoffs and upset Montreal to earn the right to meet the Detroit Red Wings in the finals. Laprade was the Rangers’ top scorer that year, but in a late-February game against the Chicago Black Hawks, he tore a ligament in his left knee. He returned to action as the regular season wound down in late March, only to re-hurt the knee in another meeting with Chicago when Bill Gadsby tripped him.

“Laprade attempted to take his place on the Rangers’ offensive but quickly withdrew to the dressing room,” The New York Times reported of that incident. “There he was examined by Dr. Vincent A. Nardiello who stated that the player had suffered a torn lateral ligament in his left knee ‘and definitely would be unavailable for the Stanley Cup games.’”

Sporting a bulky brace, Laprade played in all 12 of the Rangers playoff games, finishing among the team’s top scorers. The Rangers couldn’t quite finish the job, losing in double overtime in Game 7 in Detroit, scuttled by Pete Babando’s definitive goal. 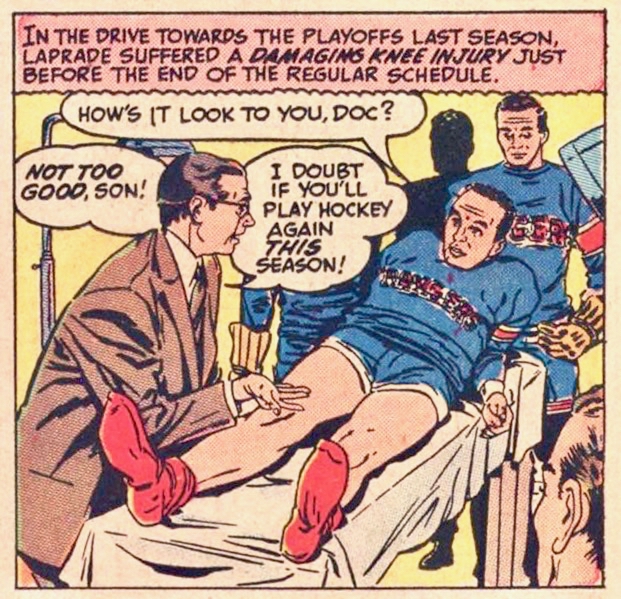