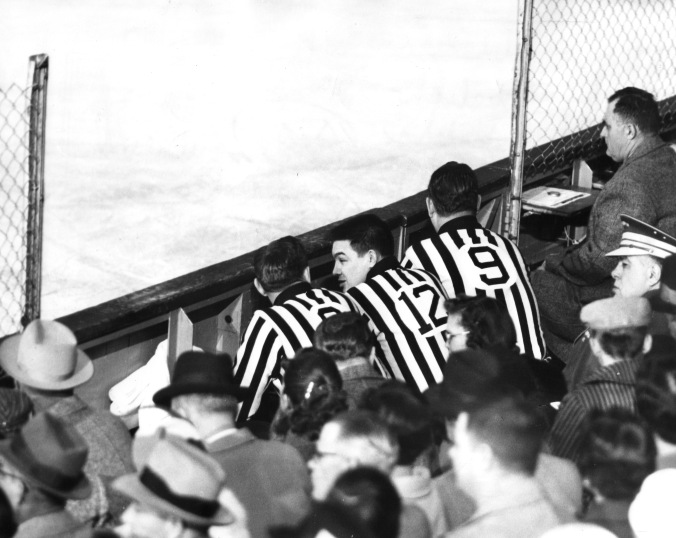 The officials on duty at Detroit’s Olympia for the Red Wings playoff meeting with Boston’s Bruins on the Thursday night of March 28, 1957, were (from left) referee Frank Udvari along with linesmen Matt Pavelich and George Hayes. Once they hit the ice, the home team ended up prevailing, by a score of 7-2, squaring the semi-final at a game apiece. Of note: Detroit goaltender Glenn Hall finished the game despite taking a first-period puck to the face and, to repair the resulting damage, 18 stitches. The night was a busy one for Udvari — the busiest, in fact, in NHL playoff history: the 22 he called set a new post-season record. “The penalties stemmed from various reasons,” Marshall Dann of the Detroit Free Press reported. “Both teams decided to play it rugged at the start, returning to style the old-fashioned bodychecks so rarely seen. Then in the late stages when all was decided, the Bruins peevishly rammed away with the off-hand thought that maybe these rough tough Red Wings could be softened up for Sunday.”