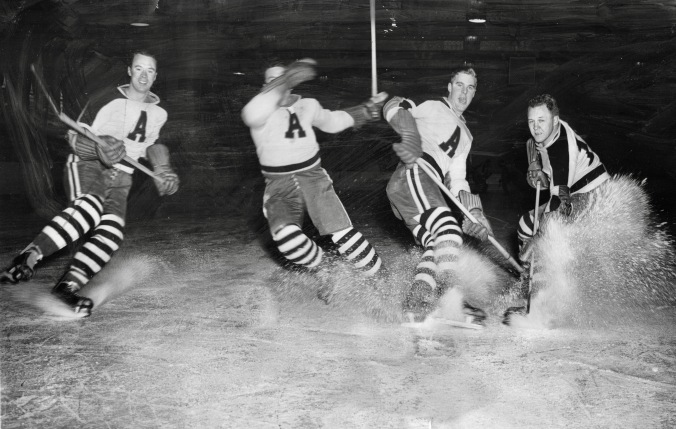 The A Team: For 16 years they skated as the New York Americans but in the fall of 1941, just before they took to the ice for a 17th season, they shifted to Brooklyn — sort of. The NHL was running by the team by then, with Red Dutton taking care of operations day-to-day. The move across the East River was going to save the franchise, setting the Amerks up in some kind of partnership with baseball’s Dodgers (after whom they would duly be re-named) and getting them into a brand-new building. And so the Brooklyn Americans launched their 1941-42 campaign — though they only ever practiced at the Brooklyn Ice Palace that year, playing home games, as they always had, at Madison Square Garden in Manhattan. Shown here ahead of their November 13 home opener against the Chicago Black Hawks are (from left) winger Mel Hill, defencemen Pat Egan and Nick Knott, and Buzz Boll, also a wing. Finishing dead last in the seven-team league that year, Brooklyn’s Americans lived through the summer of 1942 but not beyond. With the team on thin financial ice and lacking a home to call their own, Dutton asked the NHL to suspend its operations for the duration of the war. His hopes of reviving the team lasted until 1946, when the league officially cancelled the franchise.