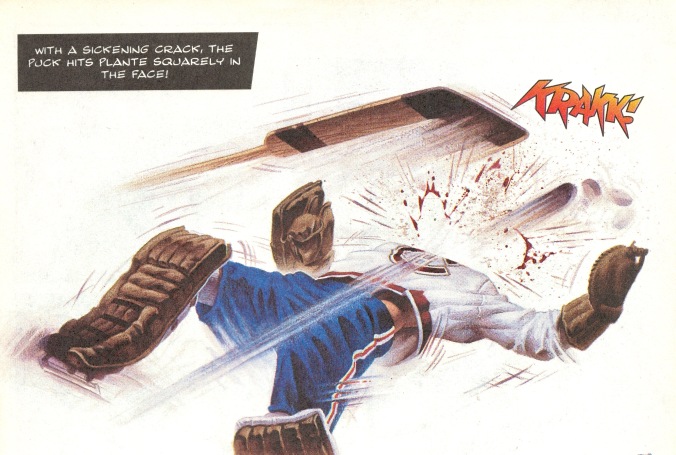 “We thought it was a joke,” Andy Bathgate said, later, recalling the mask that Jacques Plante donned for the first time in an NHL game 60 years ago today. It was Bathgate’s spiteful backhand, of course, that did the damage to Plante’s face on that Sunday in New York in 1959. There’s a fuller accounting of the hows and wherefores here; if nothing else, it confirms that the puck did not, in fact, decapitate Plante, despite what this graphic 1997 depiction, above, seems to suggest. It’s from The Man Behind the Mask, a 24-page comical retelling of the story of Plante and his mask written and inked by Michael Dixon. Publisher McClelland & Stewart was behind the True North Comics series that spawned it, teaming up with the CRB Foundation in support of the original run of Heritage Minutes, one of which — watch it here — famously dramatized Plante’s bloody night. The True North comics were handed out by the tens-of-thousands at McDonald’s restaurants across Canada. There were four volumes in all, with the others respectively recounting tales of Halifax’s 1917 explosion; Chinese migrant labour and the construction of the CPR; and Joseph Tyrrell’s 1884 discovery of dinosaur fossils in Alberta’s Badlands.